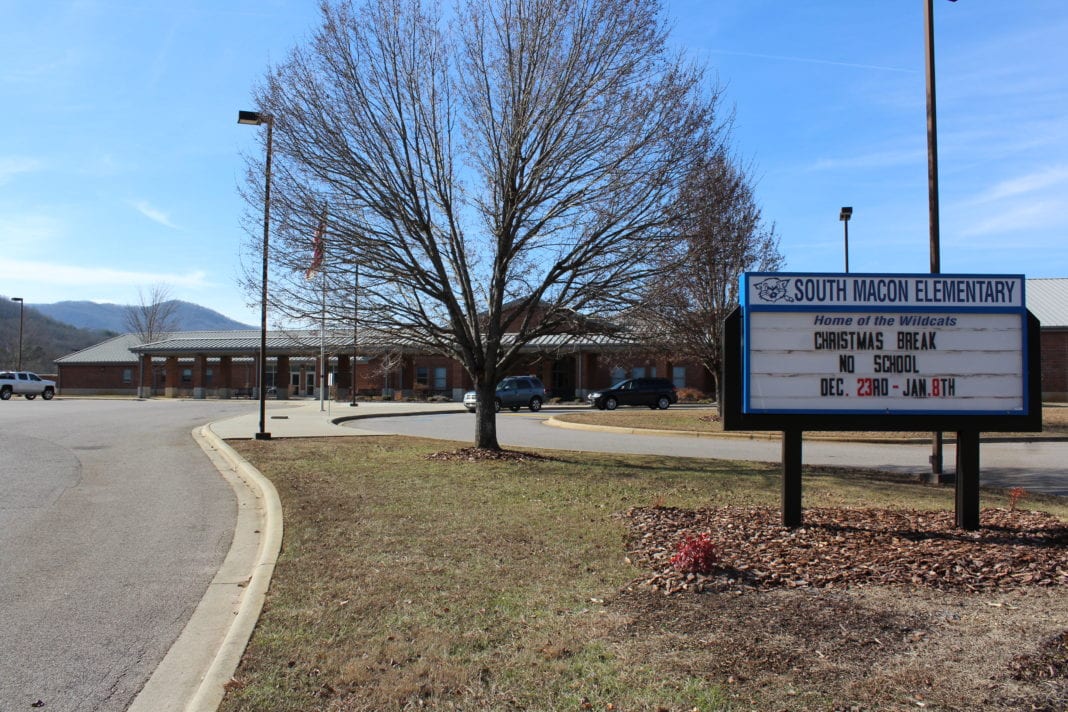 Macon County is potentially facing major school needs with an aging high school, a deteriorating football field and at least one elementary school bursting at the seams. Macon County Schools Superintendent Dr. Baldwin warned members of the Macon County Board of Commissioners of the forthcoming needs during a recent joint facilities review committee meeting.

South Macon Elementary School currently has a 12 student exceptional children’s class in a make-shift classroom because all of the other rooms are taken. The elementary school had to add a kindergarten classroom to meet state classroom sizes at the beginning of the school year and with growth projections, will have to address the overcrowding in the near future, according to Dr. Baldwin.

Commissioner Ronnie Beale noted that South Macon’s building is easy to add on to and that is something that may need to be considered in the future.

A new high school for Franklin has been talked about for years, and with considerable dollars being spent to upkeep the facility, a new building all together may be more cost efficient. The school system spent nearly $75,000 for the track alone this year, a problem that Dr. Baldwin informed commissioners is going to continue unless more than a million is invested to fix drainage issues in and around the football field.

In the past, new school construction has been handled with separate funds, with Macon County making annual debt service payments to cover the costs of the new schools that have been constructed over the last decade.

As it stands, funding for the school system, including capital outlay projects and infrastructure needs, are funded out of the county’s general budget, which is funded through the county’s property taxes, meaning Macon County residents pay the budget. Neighboring counties like Jackson County, and Rabun County Georgia, have taken a different approach to funding school needs by approving an education specific sales tax that generates revenue for infrastructure needs.

North Carolina offers individual counties the option to increase the 6.75 percent statewide sales tax to an even 7 percent, with all revenues from the extra quarter-cent going back to the county — the base 6.75 percent sales tax is shared between the county and state. When Jackson approved the measure earlier this year, they became the 28th of 100 counties to adopt the extra quarter-cent, joining its neighbor Haywood County.

The funding is specifically identified for educational needs for both Jackson County Schools and Southwestern Community College.

“The passing of the ¼ penny sales tax by such a strong margin demonstrates that our community is progressive when it comes to their children,” said Jackson County Superintendent Michael Murray. “It has been so rewarding working with our local government, school board, and educational partners collaboratively to communicate all of the needs facing our public schools. This tax will allow our both Southwestern Community College and Jackson County Public Schools to gain an estimated $1-1.4 million that would have gone back to the state. The first round will be used to fund a much needed science building for Southwestern Community College which will benefit all of our children as our region focuses more on STEM initiatives. Our recent emphasis and success with robotics opportunities is just one example of the need to sustain our science and math push.  We are hopeful that this revenue source will give us some sustainability for increased capital projects by allowing a steady funding source being provided mainly from the tourists as they pay taxes passing through our county. Allowing our tourist industry to help support our children’s education through this process is considered very beneficial to our county.”

Sales tax is often rounded up to 7 percent already, and those dollars get rolled into the redistribution of sales tax across the state. Out of the 6.75 percent sales tax, less than 3 percent is currently returned to the county. An education specific 1/4 of a penny tax would be guaranteed to Macon County each year. If approved, the tax could generate more than $1 million a year for Macon County Schools and SCC.

Macon County provides a significant portion of its budget to SCC as well and is currently in the process of a debate around spending $500,000 to match the community college’s desire to construct a new $2 million burn building. Passing a similar quarter cent sales tax would provide additional revenue for those projects, without having to increase the county’s operational budget, something Macon County Commission Chair Jim Tate supports.

“As I have mentioned in previous commission meetings, it is really amazing what Rabun County has been able to do with their school facilities utilizing a ‘special purpose local option sales tax,’ and it would be great if Macon County could do the same thing; however, North Carolina Laws are different than Georgia,” said Tate. “There can be numerous debates to arise out of the ‘pros and cons’ of the issue, but what I like most about the idea, is that we could potentially fund improvements to our schools with sales tax versus property tax. This could help us to transfer the taxes off of our local taxpayers and give some of that burden to all of the visitors and tourists that pass through our county.”

For Jackson County, those funds mean addressing longterm infrastructure needs. “These funds will allow us to accomplish projects that we would not have been able to consider for years or ever,” said Murray. “Our comprehensive facility plan identified over $21 million of needs and enhancement projects over the next five years. We were able to move forward with the county graciously providing over $9 million in funds immediately to address leaking roofs, mechanical systems, and water/safety issues immediately but this will allow us to accomplish even more.”

Macon County Superintendent Dr. Chris Baldwin noted that a similar tax in Macon County would be ideal to address the looming needs within the district.

“It would be up to the county to decide where and how to utilize the funds, but there are several current facility needs and capital projects within the school system that need to be addressed,” said Dr. Baldwin. ” Additionally, there will be other repairs and renovations that will become priorities as school facilities continue to age. These needs and projects include, but are not limited to, the student parking/stadium/track, and Fine Arts Center at FHS, MMS renovations, and additional classroom space at South Macon Elementary.”

For Macon County to consider the quarter cent sales tax increase, the Macon County Board of Commissioners would have to vote to put the referendum on the ballot for voters to either approve or deny. By state statute, the entire quarter cent sales tax would be returned to the county in which it was generated, while the majority of sales tax collected in the county is reimbursed to other counties in the state.

Macon County Commissioner Gary Shields, who serves as a liaison to the board of education and built a career in public education, said that a sales tax would be something he would consider, but only if it was something voters would be interested in.

“The 1/4 cent sales tax would need to be on the table for discussion during the mid-year commissioners work session,” said Shields. “Even though this tax is not put on gas or groceries, which affects our local taxpayers, we would need to discuss the process and time frame concerning even-numbered years.  Jackson County and Rabun County are two adjoining counties who have passed this type of sales tax and their capital outlay school projects have been upgraded.  I think the people of Macon County would need to have input via a vote and when educational capital outlay upgrades or new additions are shown as a need, I feel our voters will vote for what is best for our young people.”

Continuing funding for the Macon County Schools capital outlay needs is something newly-elected commissioner Karl Gillespie hopes to continue to do and said that considering a sales tax may be an option in doing that.

“Fundamentally, I am not opposed to a sales tax to fund capital projects,” said Gillespie. “Potentially it could take some of the burden from property owners to anyone spending in Macon County.  It’s also important to consider the economic impact, if any, from a sales tax increase. We need to continue to work with state officials to ensure that the budget includes adequate school funding and that a larger percentage of lottery funds gets returned to the schools.  These two items would lessen the burden on local budgets. Given the Macon County Boards of Commissioners history, I would be hopeful that  they would be able to continue to fund capital projects as they have in the past.  Since 2008 we have invested over $50,000,000 in capital needs and with the school system expenditures make up approximately 20 percent of our FY ’16-’17 operating budget ($9.4M).”