Just in time for the new school year to begin, the Macon County School System has announced the annual principal, teacher, and support person of the year. Each year, each school in Macon County selects their school’s individual winners  and then those winners go to a vote for the entire district.

“James Bryan, Pauletta Clark, and Vickie Sutton were selected by their peers in the Macon County School System,” said Macon County Schools Superintendent Dr. Chris Baldwin. “To have your service and hard work recognized in this manner is a tremendous and well deserved honor for these three individuals.  Mr. Bryan and Ms. Clark will move on to consideration for regional and state honors.  They will represent our school system very well.” 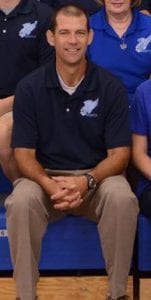 Bryan was born in Jacksonville, Fla., and moved to Western North Carolina in 1987 after graduating from Jacksonville University. He has two sons, one is a freshman at Georgia Southern University and the other is a junior in high school in Canton, Ga.

Bryan began teaching in North Carolina at Rugby Middle School, then later was moved to Apple Valley Middle School in Hendersonville, N.C. While at Rugby Middle School, he was also an assistant coach for the cross country and track teams for West Hendersonville High School. In 1993, West Henderson won both 2A Men’s and Women’s State Cross Country titles on the same day. In 2000, Bryan moved to Andrews and began working at Nantahala School teaching Physical Education to grades K-12. While at Nantahala School, Bryan has coached volleyball, cross country, and track as well as being a school bus driver.  In 2002, he received my National Board Certification in Physical Education and later renewed it in 2012. In 2004, I attended night classes at Lincoln Memorial University and received his Masters in Educational Supervision and Administration. In 2010, he was nominated by the North Carolina Alliance for Athletics, Health, Physical Education, Recreation, and Dance (NCAAHPERD) State High School Physical Educational Teacher-of-the-Year. In the fall of 2012, Bryan became principal at Nantahala School.

“I was a surprised to hear I was picked by other Macon County School principals,” said Bryan. “All the administrators in Macon County do a great job. I am honored to represent Macon County Schools. I don’t think this award would be possible without the faculty and staff I have at Nantahala School. We work well together and the teachers go above and beyond to help our students.”

With decades of experience in education, both as an educator and an administrator, Bryan has seen firsthand how public education has changed in North Carolina.

“I would say the greatest changes I have witnessed would be the advances in computer technology in the schools,” said Bryan. “The idea of taking a whole class to a computer room with outdated equipment, once a week to practice their typewriting skills and sending them back to the classroom 40 minutes later, is obsolete. Computers have become an integral part of all the subjects and built in to the curriculum. The students now in school have never been without a computer or tablet or cell phone. The advances in digital textbooks as well as useful apps for students is fascinating and is growing exponentially. I see no reason that all students in the state would be anything but successful, it’s certainly not for a lack of technology we provide in Macon County.”

While Bryan has coached teams to state championships, and watched generations of children graduate and advance, Bryan said one of the things he enjoys the most is when former students visit him.  “I really don’t have a particular memory that stands out,” said Bryan. “I have truly enjoyed my years in teaching. I would say one of the greatest compliments a teacher can have is when a former student comes back to visit and tells you how much you impacted their life. Teaching at Nantahala School is so unique because I have seen many students enroll in kindergarten and years later, graduate. There’s not many places a teacher can be involved with student for that length of time.” 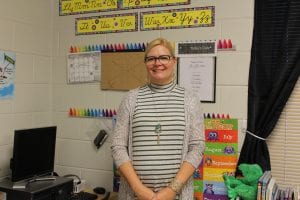 Pauletta Clark: Teacher of the Year

Clark was born and raised in Jackson County. She attended Western Carolina University and  moved to Franklin 13 years ago.  Clark’s husband Gregg Clark is a native to Franklin. Clark has three children, Erika, Aaron and Shade.

“I was so proud to represent Iotla Valley and so humbly honored to be chosen as Macon County’s Teacher of the Year,” said Clark. “I am only one representative of a county full of “Teachers of the Year”… I would love nothing more than for a Macon County teacher to go all the way.”

Clark has been teaching since 2003. She first started her career in Jackson County and has been teaching in Macon County for five years. Clark was chosen as the Junior Outstanding Education Student her junior year at WCU and during her senior year she received an Outstanding Prospective Teacher award. She has a bachelor’s degree in elementary education K-6, a reading certification in K-12, a Master’s Degree in curriculum instruction and is a National Board Certified Teacher.

Like Bryan, Clark noted that the biggest change she has seen in education is the evolution of technology.

“A huge change has been with technology,” said Clark. “When I first started teaching, students had access to apple computers with the large floppy disks.  Then the floppy disks became smaller and more durable.  It was so exciting when our school received a digital camera that used those smaller disks.  It is really amusing to think about now with the current technology available in classrooms such as IPads.  My classroom has a document camera, two student computers, an active board, and access to IPads. Teachers also use the internet for lesson planning. The availability of resources via the internet greatly enhances lessons. Teachers can immerse students in topics through the use of technology.”

In addition to technology, Clark noted that one of the biggest changes is the requirement and expectations placed on educators. “Another change is with the standards teachers are required to deliver,” she said. “When I first started teaching I used the N.C. Standard Course of Study to deliver instruction.  About four or five years ago N.C. adopted the Common Core Standards which I use currently.  The current standards also focus on 21st Century learning skills that help students to be life-long learners. The skills required for today’s work force require a new way of teaching in the public schools hence the change of standards.”

With several professional milestones and achievements to her name, Clark said the proudest moment for her during her tenure as a teacher are the chances she gets to interact with the students.

“I have had so many wonderful memories as an educator,” said Clark. “I could discuss accomplishments I have had with my professional experiences but the greatest memories I have are times spent with children.  Playing with them on the playground, being silly and making them laugh, talking with them, so many cards, and pictures telling me how much they enjoy my class and that I am their favorite teacher (even if it is for that year), families telling me how I have made a difference in their child’s life.  Hugs and visits so many years later from children I have watched grown into young adults.  Proud moments when I have watched them graduate from high school.  I have not had any of my kiddos graduate from college yet…but they are in college and getting close to that graduation and I am so proud to have been a part of that journey.” 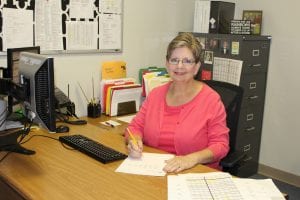 Because her father was career military, Sutton lived in six different states and a foreign country before her father retired and moved their family to Franklin.  Sutton attended Franklin High School in her junior and senior years and attended Western Carolina University, where she majored in education.  While in college, Sutton had the good fortune of learning from Emma Jean Taylor at East Franklin Elementary School and Jane Riddle at Cowee Elementary School. After spending two years in Atlanta, Ga., where she taught seventh grade language arts, Sutton married in 1985 and returned to Franklin, where she was hired to teach English at Franklin High School and later co-taught a methods of teaching English class at WCU in the evening.  In 2015, Sutton became part of the FHS administrative team, with the primary responsibility of scheduling and testing.

“I am extremely fortunate to be working with the quality staff of Franklin High School and Union Academy,” said Sutton. “We work as a team in order to address the individual needs of students and to provide a quality education for all of our students. As part of that team, I am able to support school staff and guide students in making sound academic decisions and help them to navigate any obstacles that may be in their paths. I am honored at being named Macon County’s Support Person of the Year.”

After three decades as an educator, Sutton noted that the most significant shift she has seen in public education comes in the responsibility and expectations placed on students.

“The greatest change that I have witnessed in education over the last 31 years is an increased focus on accountability for both teachers and students,” said Sutton. “The pressure for students to perform well on standardized tests has changed the climate of the classroom. No longer do teachers have as much latitude to seize the teachable moment.  In order to assist students in meeting increasingly complex objectives, teachers must maximize their class time in order to cover required objectives.  What hasn’t changed over the years is the positive impact that teachers can have on their students.”

We would also like to congratulate each Teacher of the Year as well as each Support Person of the Year listed below.

Teacher of the Year

Support Person of the Year