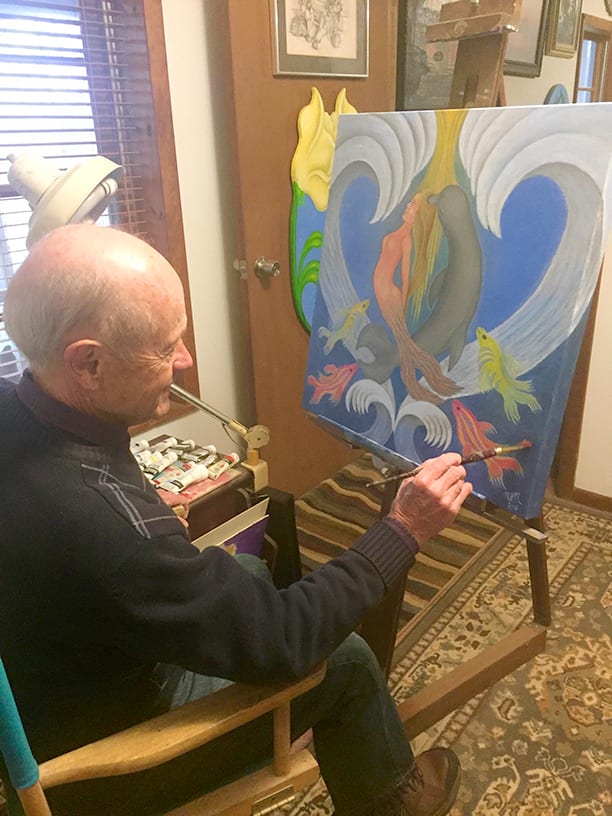 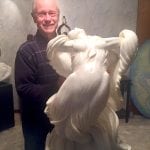 “It’s all in the creation of it,” expressed Nelson Nichols at his home/museum/studio in Franklin. He was referring to the soul-fulfilling aspects of art. At 80, he paints and sculpts for enjoyment, surrounded by a lifetime of impressive works. Every wall, corner, table, and pedestal exhibits his vast talents.

Although Nelson and his wife, Linda, have resided in Franklin for 26 years, he grew up in Scranton, Pa., and was “discovered” for his art at age 12. As a student, he was asked by teachers to draw pictures on the blackboard with chalk and one day the director of art at the University of Scranton saw his drawings and offered him a chance to participate in art classes at the university, while finishing middle and high school.

Nichols graduated from the University of Miami with a degree in political science and art, obtained a “real job” as a U.S. Treasury agent and then in management systems and long-range planning at NASA, and settled into raising two sons. He left NASA after about 20 years and decided to see where his innate artistic gift would take him. 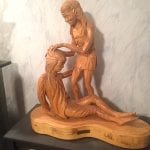 Over the years, Nichols’ works have been displayed in private homes, corporate offices, and public facilities throughout the world. Globally, he has been commissioned to create unique art for a wide variety of specific installations. In the 1980s, his sculpture of a Florida panther graced the capital building in Florida at the request of the then-acting governor.

His artistic aptitude has also been featured in regional and national magazines. Locally, his works welcomed visitors to the grand opening of the Smoky Mountain Center for the Performing Arts, and his “Wings of Love” sculpture was chosen for display when Dollywood honored the American eagle.

Plus, his family members – namely his two sons, Nelson and Michael – own many Nelson Nichols originals.

On display at his Franklin residence is a wide array of mediums and styles. He describes his signature approach as “flowing” and “spiritual expressionism,” yet he has tackled abstract forms, nature, and realism. He has painted with oils and watercolors, but currently prefers acrylic. Nichols’s sculptural body of work is particularly diverse: mahogany, carrara marble, alabaster, onyx, soap stone, travertine, bass wood, and more.

Each painting and sculpture has a back story, and Nichols orchestrates each tale animatedly, seemingly sculpting the story in the air. His hands glide over the form as he shares details. “Ascension of Venus,” valued at $85,000, is made from part of a two-ton slab of Carrara marble from the same quarry in Italy where Michelangelo obtained his marble. It arrived in port in Savannah, Ga., and was eventually carried by truck to Nichols’s Franklin studio. It took him about six months to create the massive sculpture that weighs at least 600 pounds.

“Some of my work is mythological. Some biblical … some environmental,” he said, pointing out that aging is another fascination. A bass wood sculpture shows him as a young boy at the base winding into older man reaching upward. “Breath of Life,” a mahogany sculpture with butterflies as a focus, shows “life coming in and life going out,” he said.

A sculpture titled “God So Loved,” suggests Jesus’ pierced hand, while “The Good Samaritan” in bass wood is a version of the parable in Luke 10, but with a Native American as the good Samaritan and a pioneer as the one being helped. “The Rapture” sculpture is a visual narrative on specific aspects of Revelation. One of his masterpieces, titled “The Forbidden,” is a 750-pound, rare vista grande onyx sculpture showing Eve tempted by the serpent.

As a competitive swimmer who attended the University of Miami on a swimming scholarship and who swam 15 miles for nine hours on Lake Chatuge when he turned 70, Nichols is also fascinated with water and aquatic life. Some of his art features otters, dolphins, and even mermaids.

He also enjoys incorporating loved ones into paintings and sculptures. His sons are depicted in a pen and ink drawing called “The Dynamics of Sports” as well as a sculpture featuring their likenesses wrestling. At 12 years old, he painted his older sister in her wedding attire; it is a painting he acquired since her passing. After his sister participated in a challenging mountain climb years ago, he drew his interpretation of the scene. “Pals” is an alabaster sculpture showing a grandson playing with a favorite beagle puppy. Other art features his wife and other relatives.

A current cat who has an ongoing friendship with a yard squirrel is depicted in one sculpture, while a favorite now-deceased dog, “Dixie,” – who used to lie at his feet while he sculpted – is featured with his own likeness in another piece.

Nichols, who said his creative spirit revs up around 3 a.m. each morning, has taught art and encourages students to use their minds instead of a camera. “I see something, think about it, and just get the feeling. Then I have to create.”