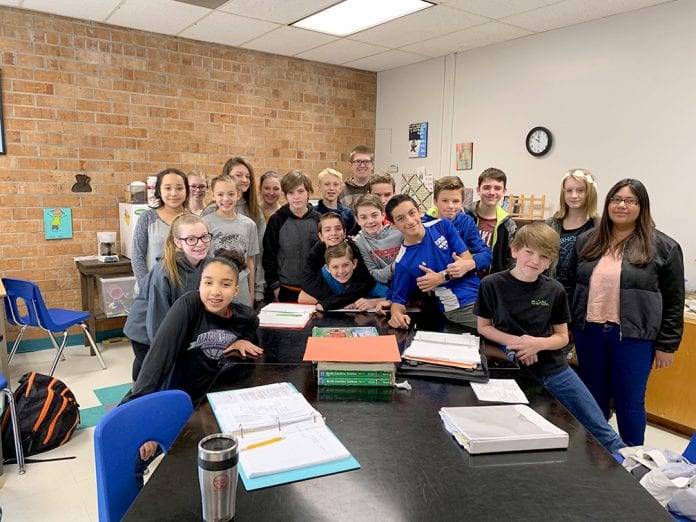 Annie Hornsby, 7th grade teacher of science at Macon Middle School, had no idea her spur-of-the-moment character-building idea for the holidays would prompt such empathy in her middle schoolers. Hornsby has been a teacher at the school for six years, and just before the Thanksgiving holiday break she proposed to students a giving opportunity. Instead of just taking the free pencils and paper she continuously provides in the classroom, why not drop a few coins in the Christmas boot and the money will go toward a worthy cause, she suggested, emphasizing that no donation was expected – just proposed as a way to give during the holiday season.

The donation target: Future of Hope Family Ministry, a Honduran education-focused program aimed at keeping children in school to decrease the extreme cycle of poverty in the Central American country. Hornsby’s daughter Molly has been a missionary for six years in Honduras and is partly supported by the congregation of Discover Church, which serves as a donation point for the ministry.

Because Hornsby’s daughter is a missionary there, Hornsby shared with the class that education is not free – as it is in America – and food is scarce. Often, she said, children go all day during school hours without eating. This, she added, makes it difficult for them to concentrate on lessons.

“I told them about the kids in Honduras and that even some change could make a difference in these kids’ lives,” said Hornsby. “… that just a little money could buy them a meal because there were no free lunches in Honduras. That got their attention. Imagine you’re hungry. How do you concentrate?”

Without any promised incentives of treats, etc., children began dropping not only coins but bills into the boot. Although Hornsby expected to raise maybe $10, which is enough to purchase meals for a dozen or so students for one day, the four classes of about 90 children raised around $250 over the holidays.

One student dropped his $100 birthday money into the boot. The money came after one student a few days earlier asked, “What if we raised $100?”

“I told the class I’d match it,” said Hornsby, “but I never thought that much money would be raised. And I especially didn’t think one student would bring in that much.”

When the student dropped in the $100 bill, another student alerted Hornsby to the large single donation. “I didn’t believe it at first. I walked over and saw the money in the boot. I just cried. Everybody spontaneous applauded. One student gave him [donor student] a big hug. It was a fun time!”

Hornsby checked with the $100 donor student’s mother to make sure the large donation was acceptable. The mother said the student expressed that he wanted to help feed the poor students in Honduras.

“The kids enjoyed this act of giving so much,” said Hornsby. “It’s just blown me away. Every time someone dropped money in the boot, the students would fist pump them and clap. When I told them I’d match whatever they raised, that really fired them up.”

Part of the experience has been calculating just how many meals can be provided. A week before Christmas, with Hornsby matching the class-raised amount, there was close to $500 available, which would feed a dozen or so Honduran students for about 25 weeks. However, the giving continued a few days before the students broke for the holidays; parents of one child donated the matched amount to alleviate Hornsby of that burden. However, she said she will still honor her pledge, which brought the amount close to $700.

“One day I shared this quote with them: ‘Individually we are one drop. Together we are an ocean.’ I am overjoyed!”

When Hornsby’s science classes return to school after the Christmas break, she will show them a video of students enjoying a meal.

Hornsby said the character building experiment worked and exceeded her expectations. “They were just so happy to do it. As a teacher, I want to teach them more than what an atom looks like so this encouraged me, seeing them reacting like that. It makes me optimistic about their level of compassion.”

She plans to offer a similar opportunity for students to give during the 2019 holidays. “Why not?” she said. “It’s been such a positive experience.”