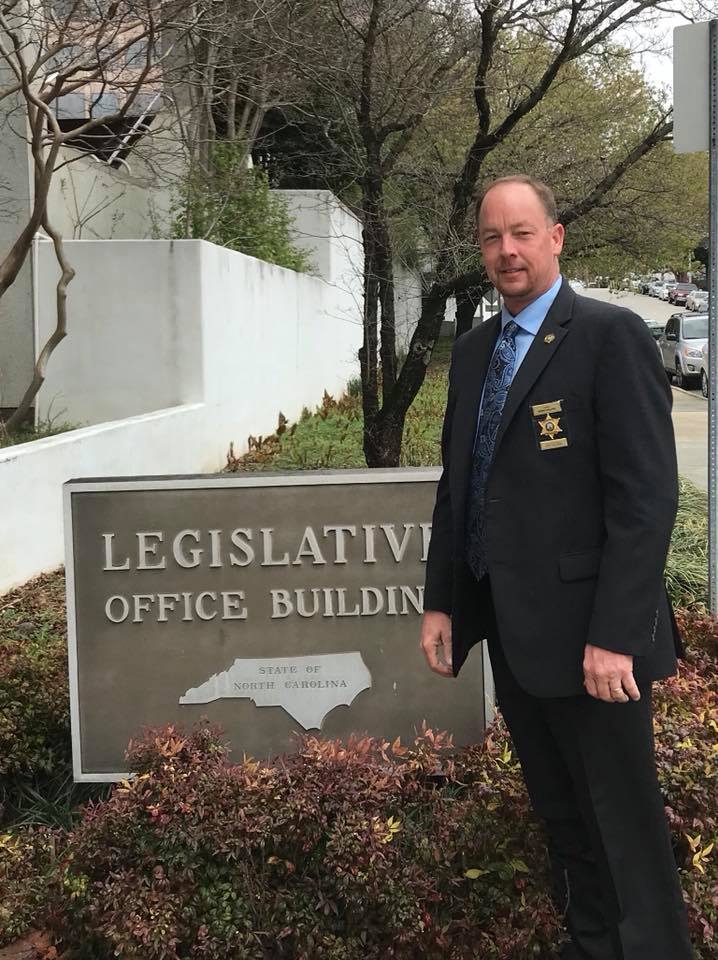 The committee was established as the state’s response to the Parkland, Fla., high school shooting and was intended to operate as a working group, receiving input from experts and keeping an open discussion to receive suggestions from members. North Carolina hasn’t had a mass school shooting like the one that claimed 17 lives in Parkland. The state has had 14 school or university shooting incidents since 2013, according to a presentation by the State Bureau of Investigation, citing data from a group advocating for gun restrictions.

Macon County was well represented at the meeting, at Moore invited Macon County Sheriff Robert Holland to speak to the committee as the chairman of the Safer Schools Task Force.

“I was honored to have Speaker Moore invite us all to come speak at the meeting,” said Sheriff Holland. “It was important that these members of the Legislature serving in this newly appointed Legislative School Safety Committee that they hear from some of those who have been on the front line addressing school safety issues in many areas.”

Sheriff Holland spoke to the committee about the importance of lawmakers having the support of leaders in charge of shaping legislation that keeps schools across North Carolina safe.

“Without the support of our leaders locally, in Raleigh and in D.C, we are limited as to what can actually be done,” said Holland. “New legislation and potential funding will be debated in the coming weeks and months and we’ll see exactly where the priorities of our leaders rest. This committee will be a real opportunity to address the many issues and put legislation in place to mandate certain measures of protection. They also hold the purse strings that may come with newly improved safety measures. Not everything that needs to be accomplished comes with a price tag. For those areas that do, we can hope that this will be the start of potential funding from the Legislature to meet school safety goals.”

While the committee was formed as a response to a mass shooting that claimed the life of 17 people, just a month later, it isn’t even the most recent school shooting on the books. A teenage girl died last week after being shot at her high school in Maryland. With the continued violence, Sheriff Holland said the conversation on school safety is more important than ever.

“​I think school safety should be an everyday conversation that we all have,” said Sheriff Holland. “School safety is not just a law enforcement problem anymore. It should be an entire community buy in. From the grocery store checkout counter to the hardware stores, we need to look at this as a community concern and all of us take the responsibility for the safety of our kids in schools seriously. Now is not the time to start finger pointing. Not the time to play politics. It’s past the time to seriously address the issues that relate to school safety.”

For the last six years, Sheriff Holland has given Macon County and all of Western North Carolina a voice on the state level as a representative of the Safer Schools Task Force. Sheriff Holland started as chair of the Physical Security and Emergency Preparedness Committee. In late 2013 and January 2014, his committee started working closely with the NC Center for Safer Schools to develop the new Critical Incident for School Faculty and Staff curriculum which replaced the previous 1999 curriculum taught in schools established post Columbine.

“We took the many lessons we have learned from tragic school events through the years and produced a video that was sent out statewide to school administrators,’ said Sheriff Holland. “Multiple sessions were held throughout the State of North Carolina to introduce the training and encouraged administrators on how to train their entire faculty. It better details the Before, During and After an event and teaches ways to mitigate an active shooter event. We also added the Run, Hide, Fight to the response because we thought it was important to give teachers real life options to be able to deal with these events in their schools.”

Three of the main topics of discussion last week in Raleigh, mental health services, improving physical school security, and school resource officers, have already made their way into the conversation locally.

The committee talked at length about increasing funding and support for school resource officers, or SROs. There is a shortage of SROs in both rural and urban schools. Macon County is leading the charge in terms of School Resource Officers. Out of the six far western counties, Macon, Jackson, Swain, Haywood, Graham, and Clay, Macon County is the only county that currently has an SRO stationed at every school.

Both Sheriff Holland and the Macon County Board of Commissioners have been committed to increasing SROs at all schools over the last few years. Sheriff Holland has eliminated other positions in his department to be able to fund SROs and has also partnered with the commissioners on grant funding to secure new positions. The county has also partnered with Highlands Police Department, to provide an officer at Highlands School, splitting the cost of the position.

In addition to being the only county in the west to fund an SRO at every school in the district, Macon County is also the only county where the Sheriff’s Office is responsible for funding the positions. In Swain, Haywood, Graham, and Clay counties, the Board of Education funds the positions out of their funds and through state grants available through the Department of Instruction. Laws approved since 2013 provided $7 million in matching funds for school systems to pay for law enforcement officers and $2 million for the installation of school panic alarms.

Out of all six western counties, only Graham County has no plans to add any SROs in the coming year to better cover the district. Jackson County, which currently has four SROs and eight schools, has asked their county commissioners to approve funding to add an additional four positions to ensure all schools in the county employ an SRO.

Legislators at last week’s state meeting also discussed requiring the officers to get specific training for school service, so that they are well equipped technically and are trained to de-escalate situations and treat students fairly.

Speakers said the state’s school system is largely ill-equipped to evaluate children with mental illness and predict who is most inclined to act violently. Troubled students sent home because of suspension or expulsion are most at risk of becoming isolated, said Greta Metcalf, who works for a behavioral health services provider and is a member of the state’s Task Force for Safer Schools.

Jim Deni a professor at Appalachian State University and past president of the N.C. School Psychology Association addressed the committee with these concerning statistics:

• 1 in 5 North Carolina children has a mental health or substance use disorder and 75 percent will not receive treatment in the current system.

• North Carolina has about one school psychologist for every 2,100 students, and the nationally recommended ratio is 1 for every 700 students.

• About 80 percent of North Carolina parents polled say they don’t believe their child’s school has enough funding to deal with children’s social and emotional health.

Dr. Baldwin addressed the mental health services shortfall during Monday night’s Board of Education meeting, commenting on how under staffed Macon County schools are in terms of mental health professionals.

“Schools are not immune to mental health issues, but they are very very limited in terms of the resources available, “ said Dr. Baldwin.

“If Nicholas Cruz, [the Parkland shooter] had had his mental health issues addressed early on, there may be 17 people who would still be alive today,” said Dr. Baldwin. “We are talking about doing something in our school system that could possible save lives.”

Representative Craig Horn (R- Union) stressed the need to increase security and access to school buildings during the meeting in Raleigh. Dr. Baldwin said that same issue is something now being evaluated locally.

Dr. Baldwin informed members of the board that the budget request and capital outlay items previously approved by the board may change, pending an evaluation of the physical security of school buildings.

Referencing an incident in Hoke County, where an individual was able to gain entry during the school day and assault a teacher while looking for another, Macon County Schools consultant Todd Gibbs said that addressing entry points and access during the school day is something that needs to be closely examined and improved.

“Ultimately we want to do whatever we can, in every approach we can, to ensure that our children are as safe as possible,” said Dr. Baldwin.

Some solutions to improving physical access included installing locks on the inside of classrooms, re-fitting old schools and planning new school construction with more safety features. The floor plans of all public schools have been uploaded into a digital database so that emergency responders can access school layouts in a crisis.

Cowee goes to commissioners for funding to finish out fiscal year