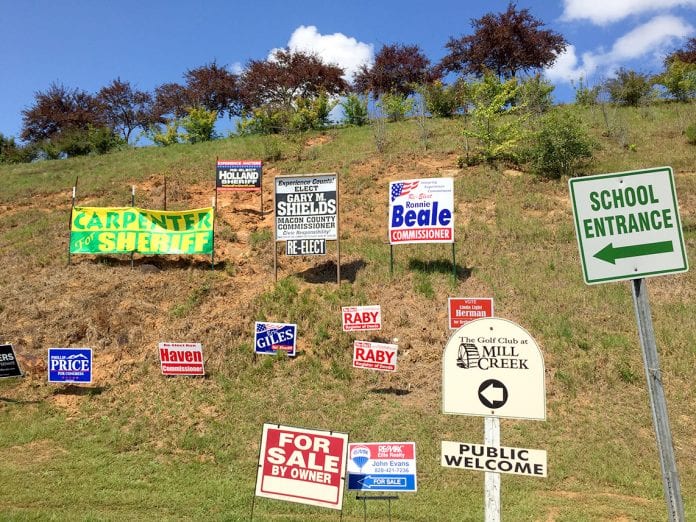 Editor’s note: Traditionally The Macon County News provides candidate profiles during election season. The series begins with the Macon County Sheriff’s race. On the ballot for the position is incumbent Sheriff Robert Holland on the Republican ticket, Cherokee County Corporal Eric Giles on the Democrat side; and Graham County deputy Brian Carpenter, who is running as unaffiliated.

“My lawyer asked me not to talk to the media,” Democratic candidate for sheriff Eric Giles told The Macon County News Friday before directing a reporter to his Facebook page.

The Cherokee County corporal was muzzled by his lawyer after the District Attorney’s office issued a Giglio Order Aug. 28 stemming from allegedly inaccurate comments he made at an April candidates forum held at the Macon County library. The order, along with an accompanying investigation by the Cherokee Sheriff’s Department, means Giles cannot be used as a reliable witness. Meanwhile, 34-year-old unaffiliated candidate and Graham County Patrol Sergeant Bryan Carpenter is happy to talk.

Carpenter obtained 1,080 valid signatures to make the ballot in the May primary, just over the required 4 percent of registered voters, or 1,018.

“He helped me out getting those signatures,” Carpenter said of the Lord’s role in his second attempt to earn the sheriff’s badge.

When asked why he was running for sheriff with just under four years in law enforcement experience, he said he felt called to do so. Carpenter has worked in jobs ranging from lawn care to scrap yards and driving a forklift. Four years ago, he began his quest to build a career in law enforcement and in addition to his work with the Graham County Sheriff’s Department, he obtained an associate degree in       Criminal Justice from Haywood Community College, along with certificates in canine handling, narcotics, drug investigations and emergency management.

Twenty-seven-year Macon County Sheriff’s Department veteran, Robert Holland described “fighting the war on drugs,” as well as addressing opioid addiction as the county’s law enforcement priorities. He also set a goal of training a fourth police dog so that each shift can have a dog. He said because his 22 patrol officers have canine training experience, a dog can be trained for half the cost of purchasing a new, trained dog at a cost of about $15,000. Holland also acknowledged that simply locking up drug offenders was not a viable solution.

“We don’t need a system full of addicts, but we have to do something to keep our community safe,” he said, praising an existing program in the Macon County Detention Center that attempts to prevent recidivism. The program, “Prime for Life,” combines building self-confidence and providing follow-on information for mental and addiction treatment for offenders upon release.

Giles’ September 9 Facebook post names “more drug busts” as the first in a list of goals, which also included “getting help for addicts.” An August 31 post called for programs like Stacie Ledford’s Rock Bottom Recovery in Hayesville. As a peer support specialist and former inmate, Ledford similarly attends to convicts while they are in jail. Giles’ YouTube promotional video also calls for “tougher and more consistent drug enforcement policy with equal law enforcement county wide.”

Carpenter also named narcotics as his top priority, calling for a combination of technology and more and better-trained police dogs to address the county’s drug problem.

“I just feel that I can make Macon County one of the safest places to be in North Carolina,” he said.

The three-year Graham County road deputy and K-9 handler and his dog Boaz, whose name he chose from the Book of Ruth for his swiftness, have witnessed the drug problem in Western Carolina first hand. Carpenter calls for more dogs with more training, and tag readers capable of reading some 1,800 plates a minute with a price tag of around $15,000. Carpenter feels that having such a device on Georgia Road can help officers to pull over motorists with pending violations, recoup the costs with tickets, and potentially leading to more drug arrests.

How do the candidates feel about their chances?

“I have gained more experience in the field, and I’m just raring to go,” Carpenter said about the Nov. 6 election.

Sheriff Holland has no plans to change his personal email account, which has his current title.

“I feel good about the election,” he said. “But of course, I look at it as every four years I get evaluated.”

Sheriff Holland added that no matter the results, he’s proud of his accomplishments and helping all Macon County citizens, “no matter what side of the street they’re on.”

“People want change,” said Carpenter. “I feel this is a prime time for the voters to come out and make a change and have a voice.”

Eric Giles declined to respond to questions about his prospects in the election.