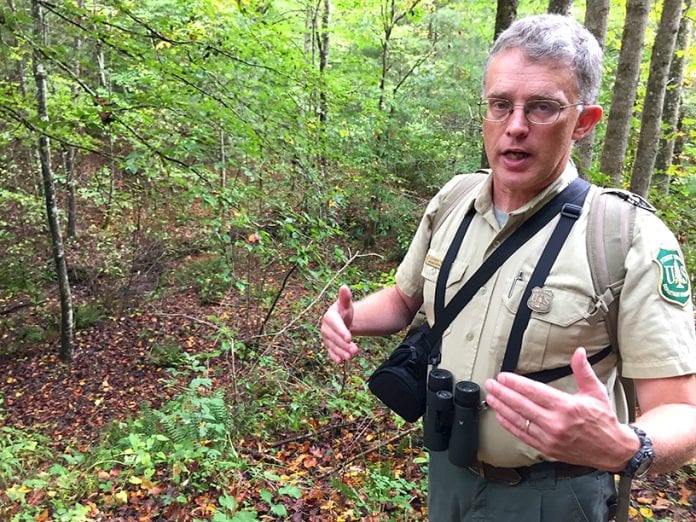 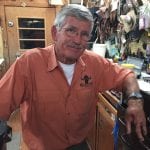 Bears are on the move. Just look at the forest floor or the tops of an oak and you likely won’t see acorns, the omnivore’s principle food source. That could mean a bigger bear harvest this season, said Nantahala Forest wildlife biologist Johnny Wills.

Twenty-seven bears were harvested in Macon County in the first week of the season that began Oct. 15, according to the North Carolina Wildlife Resources Commission Live Harvest Report.

On a recent walk on Bartram Trail at the end of Ray Cove Road, Wills explained how the Forest Service manages habitat, and the state manages animals. He also gave a history lesson on bear eating habits.

“One hundred years ago, the American chestnut was the dominant tree, and was a very reliable source of fat,” he said. “Fat is what your body wants to store and that’s what bears do.”

When the chestnut blight wiped out most American chestnuts in recent decades, bears turned to other food sources like beech, oaks and hickory trees for hard masts, or nuts and acorns, as a primary food source in the fall. Wild blackberries, cherries and grapes provide summer food sources. Macon County’s 2016 fires cleared out areas which spawned new low growth for these berries.

“I’m hearing from the bear hunters there are no white acorns up high, and the bears follow the white acorns,” said Bill Fuchs, owner of Wilderness Taxidermy, which processes dozens of Western North Carolina bears each season caught near Wayah Bald and the Cashiers Highlands Plateau.

“This year I would predict that bear harvest numbers might bounce up a little at least in the early part of the season,” Wills said. “All these different wild animals that depend on acorns and hickory nuts are going to be moving more, and that exposes them to risk of predation more.”

Wills explained that means bears are more likely to run into a hunter or leave their scent trail for dogs.

Statewide for the 2016-17 hunting season, the last for which figures are available, 23,647 hunters harvested 4,110 bears. That means about 17 percent of hunters got one, and that’s all they are allowed. Day and season limits per hunter is one bear, excluding cubs under 75 pounds and females with cubs. Hunting bear on a designated bear sanctuary is also prohibited.

Bear hunters almost had two additional weeks before the Commission rejected a proposal to add two weeks in October to the bear hunting season, a failed attempt to de-conflict bear and deer hunting season, which overlap in December.

It’s hard to say how many bears there really are in Macon County. Just because they’re rustling through your trash can doesn’t necessarily mean there are more of them, said Wills. That means there’s not enough food in the forest as Highlands residents have recently found out.

Bears have been roaming Main Street at night in Highlands.

“The bear problem is just as much a people problem. Irresponsible actions by people go hand in hand with the bear behavior,” Mayor Patrick Taylor wrote October 18, before a public meeting was held to discuss investments in bear-proof trash bins and better citizen education.

He also plans to hold a coffee with community members Oct. 26 at the Hudson Library to discuss the “bear problem” with representatives from the B.E.A.R. Task Force, North Carolina Wildlife Resources Commission, the Biological Station and the Highlands Police Department.

“You got bears and people habitat and bear habitat is just like that,” Wills said, overlapping both hands with fingers fully extended. “Across the eastern U.S., bear human conflicts are pretty serious and seem to be increasing as time goes on.”

As evident on the Bartram Trail hike, homes with large manicured lawns butt right up against the forest. In many parts of Macon County, residents enjoy living right in the forest, completely overlapping with bear habitat.

“This habitat could probably support quite a bit more wild animal species than it does,” said Wills. “But because human beings live in the mix, the social carrying capacity is usually lower.”

“You have these conflicts, but in hunting, if you regulate the population, if you take some of the excess animals out, you’re probably reducing some of the conflicts, too,” Wills explained. “If you don’t kill those bears to sport harvest, where are they going to go?”

Are there enough bears to hunt?

“I’ve been concerned about bear population for the past 30 years thinking they’re over-harvested,” said Fuchs. “They´re not.” 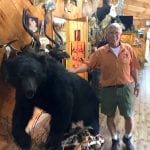 The 42-year local taxidermist does not believe black bear populations are threatened in the least in Macon County.

“Oh hell no. They’re being managed responsibly,” he said. “There’s a lot of them. They have to be harvested. They can’t be allowed to continue to propagate, because if they do, we’re going to have bears in everybody’s yard.”

How many bears are there in Macon County?

The University of Tennessee-Knoxville may have those answers soon. Their Southern Appalachian Cooperative Bear Study (SACBS) uses doughnuts and barbed wire snares to collect tiny bear fur samples for DNA analysis. A May press release predicted that 425 “safe” snares would be planted in North Carolina to produce an accurate population count.

“When it comes to black bears in the eastern U.S., they’re not coming anywhere close to killing all the bears,” said Wills, attributing this to the conservative nature of the season and bag limit restrictions.

For Jeff Fisher, manager at Outdoor 76 on Main Street, it’s not that bears are harvested that bothers the nature-lover, it’s how they are hunted with hounds.

“It seems a little unfair to a black bear to set your dogs loose on it while you sip coffee and stand around a truck,” he said, while serving craft beers to visitors at Franklin’s Pumpkin Fest Saturday. “Give the animal a chance. Where’s the sportsmanship?”

Wills addressed the tangible and intangible benefits of bear hunting.

“Hunting serves as a management tool. Yes, it’s a recreational thing,” he said. “The sport of it is the non-tangible part, but the other intangible benefit that you get is managing those populations because if we didn’t manage the population of bears in a given area, nature would do it one way or another, either through starvation or disease.”