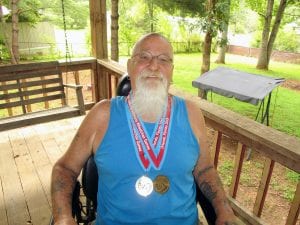 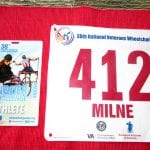 Triumphant! Jubilant! Inspired! The emotions conveyed by Skip Milne as a result of his gold medal winnings at the 38th annual National Veterans Wheelchair Games (NVWG) were contagious. Having just returned from the grueling seven-day competition in Orlando, Fla., and bringing home gold medals in two of his four categories, Milne is still processing the experience. The Vietnam veteran, nicknamed “flaming head vet” because of his tattoo, qualified for a spot among 600 disabled veterans from across the U.S.

“I had a positive attitude the whole time; and I was pretty sure I could win at least something, but I pretty much surprised myself,” said Milne.

Milne prepared well in advance by developing his mental capacity and his physical prowess mostly by refusing to give in to limitations and focusing on his yard and other chores to increase strength. He competed against other novice contestants in bowling, rifle shoot, nine ball (pool) and motorized rally (mastering an obstacle course).

Of the four, he received gold medals in bowling and motorized rally and missed being third place in the rifle shoot by one point. Heexplained the near miss and his competition. 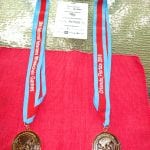 “I had 350, and a guy with 351 beat me out of third place, but I was happy with all of it,” Milne excitedly proclaimed. “There were a lot of paralyzed veterans there, and there were a lot of wheelchairs. Most were from America, but I met some guys from Britain that were really amazing people. There were just a whole lot of different disabilities. Nobody looked at anybody different, because we were all in the same boat.”

The NVWG is co-presented between the Department of Veterans Affairs and Paralyzed Veterans of America. Each participant had met the NVWG’s Qualifying Disability Statement: “Participation in the NVWG is open to veterans having spinal cord injuries, amputations, multiple sclerosis or other central neurological conditions who require a wheelchair for athletic competition. The individual’s physical injury must be permanent and measurable.”

It is also an event that encourages leadership and fellowship among the veterans, providing the competitive platform to build their confidence and skills so they can transfer those into their daily lives with an optimistic outlook. Another primary focus is the opportunity for veterans to rally together as a community, supporting one another.

“There was a lot of camaraderie – a lot of fellowship,” said Milne. “I made a lot of new friends. Everybody seemed to be quite impressed by my head. Everybody was centered, and the friendships came after the fact. That’s what made it so great – they weren’t there to party or hang out in hotels or swimming pools or soak in the air conditioning. They were there to win.”

Still fresh in his mind, however, is the contrasting experience he hasn’t quite shaken.

“When I returned home from the Vietnam War, I kind of expected the Eisenhower-styled parade. Instead, I was berated by citizens and veterans alike and spat upon by hippies and told I didn’t fight in a real war.”

Those were unexpected wounds for Milne who now says he has returned from the NVWG quite sore, but “damn proud.”

He came equipped with blessings from a cheering squad this time. Traveling with his 20-year old grandson, Zachary, Milne stopped in Florida to visit his long-time friends, including one from his favorite bar of 25 years ago.

“They were proud because this is something no one in the whole world would think I was going to do, especially that group.”

“I think it’s wonderful! When he called, I was still sitting on the edge of my chair in anticipation. It seemed to take a long time. Then when he called, he got the one, and then he got two. I called the kids and told them. They were all kinds of happy and proud.”

Words of inspiration also flowed from the fellow veterans with whom he associates. They have been supportive, and he laughingly says they wouldn’t have provided him the money to go if they didn’t believe in him. Veterans of Foreign War Post #7339 and the Macon County Vietnam Veterans of America Post #994 provided that support.

“They said, ‘make us proud!’” said Milne. “I also want to inspire others. Go and compete. You’ll get there and you’ll see that you’re not alone. And see that there are other people with worse disabilities than you that are there. You’ll find yourself in a position that you’ve never had before. It kind of opens your heart and your mind quite a bit.”

Milne is taking his own words to heart. He plans to invest inspiration he has received to begin preparing immediately for the July 13, 2019 NVWG to be held in Louisville, Ky. This time he has his eye on the track and field events, especially the shot put and the javelin.

“My goal is to win more next year. I’m positively moving forward; going on with my life and doing something to prove to myself that I can do better next year.”

Editor’s note: In the preview article in the May 24 issue of The Macon County News,  about Milne’s selection for the National Veterans Wheelchair Games, it was stated that Milne received three purple hearts, when, in fact, he had received two.  The writer relied on a reputable written source from 1999 for details about Milne’s purple hearts [where there was a misprint]. Milne did not see the Macon County News article until it went to print.