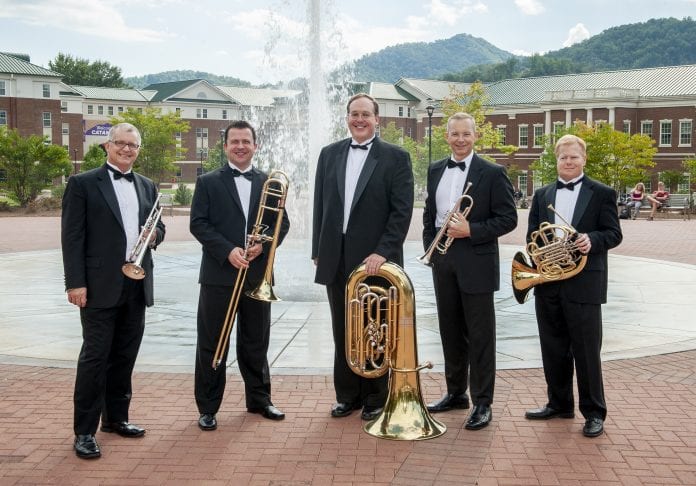 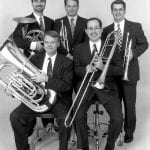 The Sylva-based Smoky Mountain Brass Quintet will present a concert celebrating 25 years of music, travel and fun together Sunday, Feb. 17, in the Community Room of the Jackson County Public Library.

Free and open to the public, the concert begins at 7 p.m. and will be preceded with a slideshow features the Smoky Mountain Brass Quintet’s travels from around the world throughout the years. The quintet recently released its first CD, “Celebrating 25 Years,” which also will be available for purchase.

The quintet was formed in 1993 and has performed nationally and internationally, with a wide repertoire that includes pop, jazz, patriotic and standards, as well as commissioned works. The group then and now is made up of faculty from Western Carolina University’s School of Music and, until 2017, was WCU’s quintet-in-residence.

Current members are P. Bradley Ulrich, trumpet; David Ginn, trumpet; Travis Bennett, horn; Mike Schallock, tuba; and Zsolt Szabo, trombone. The selections for the evening include “Escape” and “Galleons and Cutlasses” by Kevin McKee, “Arrival of the Queen of Sheba” by Handel, “Four Hymn Tune Settings” by Paul Basler, “American Heritage Fantasy” by Bruce Frazier, “Dance of the Yao People” by Tieshan and Yuan, and “Contrabajeando” by Astor Piazzola. Between musical selections, the musicians will share some of their favorite memories of past performances and tours.

Ginn and Ulrich are founding members of the quintet, which initially presented a concert each semester in the recital hall of the Coulter Building on campus, then concerts for Jackson County students and later other public school students from the region. The group also played at local fundraisers for various causes, including a new public library, an arts council benefit and support for the high school band program, which led to events for charitable organizations such as the Alzheimer’s Foundation, Relay for Life and California wildfire victims.

“The early days, I think, was simply us desiring a creative outlet to satisfy our need to develop our musicianship in a professional, committed way,” said Ginn. “In the beginning, the group had never considered evolving into our tagline, ‘cultural ambassadors building international relationships through music.’ Sharing our music, especially the music from our Southern Appalachians on the international stage, didn’t enter our minds until 2004.”

That year, the quintet hosted an informal lunchtime “Welcome to WCU” concert for the incoming provost, Kyle R. Carter, with then-Chancellor John W. Bardo in attendance. At that concert, there was an announcement that the quintet had been invited to represent the university at a festival in St. Petersburg, Russia, through contacts of Ulrich. Chancellor Bardo loved the idea and needed elements came together to make an international tour happen, Ginn said.

“As our local vision expanded, so did our international vision,” said Ulrich. “We began with that tour to Russia in 2005, then England, Ireland and Wales in 2006, before performing at Carnegie Hall in 2007. Nearly every year since, we’ve set our sights on performing at the international sister schools of WCU and in places we never thought we would ever see, such as China, Jamaica and South Africa.

“To date, we have had performances and given master classes in 14 different countries around the world,” he said. “Over 25 years, we have had a total of nine different members of the ensemble and all have been a pleasure to perform with and get to know.  This group is as much a family as it is an outstanding musical ensemble.”

Playing for an international audience is great, but there’s something about home, Schallock said. “Contributing to the musical accomplishments of the Smoky Mountain Brass Quintet has definitely been rewarding; however, I agree that the most meaningful rewards have been through service to the community and causes over the years,” he said. “Playing for our home audience is always great, even though it seems to bring with it a little extra pressure to perform to make it special.”

The quintet has proven to be an excellent recruitment resource for WCU’s School of Music, including performing for many of the top public school music programs in North Carolina, South Carolina, Tennessee and Georgia, members said.

Bennett joined the group in 2006. “One of my very first gigs was a parade in Cherokee,” he said. “They had us sitting in the back of some kind of large military truck and we were trying to play a Sousa march while inhaling diesel fumes. That was quite a contrast to just a few months later, when we performed in Carnegie Hall.

“My favorite part of my job is playing with these guys,” Bennett said. “I’ve been in lots of chamber music ensembles that are dysfunctional in lots of ways, but the members of the quintet really get along well and work really well together. Thanks to them, I’ve seen parts of the world I would never have seen otherwise. I still pinch myself when I think that I’ve walked on the Great Wall of China, and sat on the southernmost tip of Africa.”

Szabo appreciates the opportunity to travel and share music. He recalls enjoying a more recent tour that took the quintet to his hometown in Romania. “When the group spent time enjoying traditional Hungarian dishes in my mom’s living room will always have a special place in my heart,” Szabo said. “During the past five years, I discovered in SMBQ a wonderful group of colleagues who perform together at the highest international standards, and a warm and caring group of true friends. I couldn’t be happier and honored to be a member of this great ensemble. I’m looking forward to many more years of performing together.”

The comradery is something Ginn, too, especially values.

“Not only have members of the Smoky Mountain Brass Quintet gotten along for 25 years, they are more like a family. And like other members of my family, they traveled the 13-year journey of my wife’s illness ― early onset Alzheimer’s ― with us,” Ginn said. “Once, I even tried to quit the group because I felt I was holding it back because of my limited practice time and ability to travel. They said, ‘no.’ I’m so glad they did, as the group was the only thing I retained from my pre-diagnosis life. They patiently welcomed my wife Debbie as she accompanied me to hundreds of rehearsals, two recording sessions, and more than a few short tours. She was the group’s biggest fan, and the group played her two favorite pieces at her celebration of life after her death.

“Not many groups can claim that as one of their legacies.”