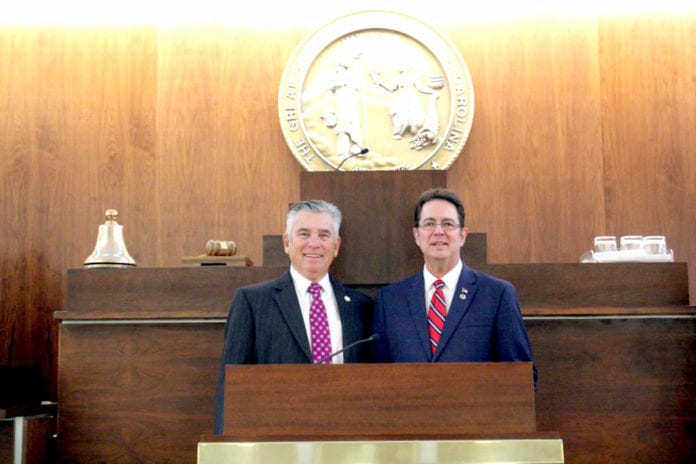 North Carolina House of Representative Kevin Corbin, who represents Macon County is among the state’s legislators who whole-heartedly agree that smaller classes in early grades would improve learning.

Corbin, who served as the chairman of the Macon County Board of Education for 16 years, supports smaller class sizes and believes in the benefits of such. But as a former Macon County Commissioner, Corbin understands that decisions made on the state level, are often passed down to county leaders, and however well intentioned, result in unfunded mandates that create undue hardships on the county level.

“I don’t think there is anyone in the House or the Senate that would argue that smaller class sizes are a good idea,” said Corbin. “It has even been proven to work in Mecklenburg, or Wake, or the other bigger cities. But the fact of the matter is, that children don’t come in perfect packages of 18 or 20, especially in rural areas.”

School districts across the state are about to begin their budget planning process this month, but have little guidance in how to proceed based on pending legislation. Corbin said a solution is closer than one might think. Corbin is in Raleigh this week and the main topic of discussion is the classroom size requirements.

Corbin says he and fellow Republicans who chair education committees are working to get legislation introduced that will phase in the smaller class sizes in stages over a period of years.

He said their objective is to continue allowing school systems a certain level of flexibility with state dollars, while increasing accountability.

Currently in North Carolina, the state mandates that kindergarten through third grade have strict class size caps — 18 students to one teacher in kindergarten, 16 to one in first grade, and 17 to one in second and third grade. While the caps have been in place, so has the flexibility to look at the district as a whole, factoring in all kindergarten classrooms, and staying under the average as an entire district. The district average flexibility is once again set to expire this fall.

This flexibility is important because it means school systems can hire teachers for “enhancement” non-core subjects like art, physical education and music – plus target class-size reductions to students who most benefit from smaller classes.

Corbin was the primary sponsor on House Bill 13, which was passed by state leaders last year. The legislation provided school districts like Macon County with the flexibility for another year, to continue looking at averages rather than individual classrooms. Corbin is currently working with House Rep Craig Horn (R-District 68, Union County) to have a more permanent solution to the problem.

Districts across the state have spoken out against the legislation, with their primary concern being two-fold: First, districts say that they would have to hire a significant number of teachers to meet the mandates and second, districts do not have the space in their existing facilities and would be forced to build new buildings or expand existing ones. Both issues are concerns because as Corbin pointed out, with the state’s mandate, no additional funding is provided to implement the legislation.

“At one point, Macon County has 53 teachers on the local payroll,” said Corbin. “That was 53 teacher salaries the county commissioner was funding based on the need of the district and a shortfall in state funds. If something isn’t done, next fall counties across the state will be faced with that same issue and a $1.5 million increase on a county budget to meet the requirements it tough.”

“A compromise on the class-size mandate would be very beneficial to the Macon County School system,” said Macon County Schools Superintendent Dr. Chris Baldwin.  “As the legislation is currently  written, six additional K-3 teachers will be needed in Macon County. These teaching positions will require classroom space and will need accompanying teacher assistants.  It was the understanding of school systems across the state that the current teacher allotment system provided for music, art, and physical education (PE).  Apparently, this was not the general assembly’s understanding.  In other words, there has been no funding for these courses. Apparently, school systems should have been funding these locally, or not offering music, art or PE to our students. Therefore, difficult decisions will need to be considered regarding these subject areas moving forward.”

None of the K-3 classrooms in any of Macon County’s elementary schools would currently meet the mandate this fall if left as is. Rather than looking at PE and art teachers, Dr. Baldwin has cautioned that another way to address the mandate and not have to build new buildings, would be to have larger 4th classrooms since there is no law dictating class sizes in fourth grade.

“The 4th grade funding ratio is 1:24, and we are currently well below that,” said. Dr. Baldwin. “So, legally we could have extremely large 4th grades, converting those classrooms and teachers to K-3. If we did this,  4th grade classrooms would have well over 30 students per classroom.  Our 4th grade ratios are currently 1 teacher for 20 students.”

Buncombe County schools would have to hire 35 teachers to meet the limits for the coming school year, Superintendent Tony Baldwin said. That would cost the system $2.5 million. In Wake County, schools have “a huge building issue. They don’t have enough room” to accommodate the increased number of classes the limits would require.

While Corbin has been working diligently to address the issue and has been working with the education committee on behalf of school districts across NC pleading for a change, Senator Jim Davis is one of few legislators in the state who aren’t as keen on the idea.

Davis said money the legislature has appropriated for more teachers has not always been used as it should. He said he wants to see more data before making a decision on whether to change requirements.