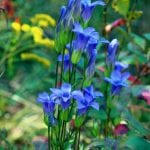 Walking to the mailbox one day in October I was shocked to find what appeared to be a gentian.  From school days I remembered a poem by William Cullen Bryant, (do not ask me why this is the only poem I remember):

“Thou waited late, and com’st alone;

When woods are bare and birds have flown

And frost and shortening days portend

The aged year is near his end.

Then doth thy sweet and quiet eye

Look through its fringes to the sky,

Blue-blue-as if that sky let fall

A flower from its cerulean wall.” 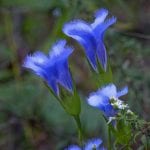 This gentian I found has no fringes on the uppermost edges of the lobes of flowers.  Also, the flowers were closed, with a couple just barely open as if someone had carefully pried them apart to take a look inside.  I hurried home images fresh in my mind for the field guides.  I returned 30 minutes later to get the mail, armed with a 10x hand lens.

It took some time to confirm the identification as Gentiana quinquerfolia, agueweed or stiff gentian.  I had to look up the meaning of ague, a fever that produces chills and shaking.  Further reading uncovered some interesting facts.  Some gentians with closed blooms have a faint white rim at the tip.  This serves as a pollination guide for insects, a target.  Once a bumblebee enters the bloom, the white margin darkens, indicating to others that the pollen is already gone.  It is usually the bumblebee that is strong enough to open the blooms.

Closed gentians are one of the richest of all flowers in nectar quantity.  It is speculated that the closed blooms prevent rain from diluting the nectar. There are not many plants whose flowers appear to be buds. Gentians tend to colonize. They are not often found but when present they may be numerous.  Many prefer moist sites in light shade – along stream banks are good places to look.  They all bloom late in the season, some as late as November.  So, it is a good blooming plant to look for in the fall along with the ladies’ tresses orchid.

Author Jack Sanders has written a wonderful book called “Secrets of Wildflowers.”  He poetically puts gentians in the Royal Family because of their deep blue color.  As he describes them, “Most are brilliant in color, extraordinary in dress, finicky in situation, and few in number.  Even the name has a regal origin.”

Gentians were named after King Gentius who lived in Shakespeare’s time in a country now known as Albania.  He discovered a species of Gentiana that was curative.  There have been numerous uses of gentian extracts to cure and alleviate stomach problems as well as fevers.  There was even a patent medicine made from gentian roots, Moxie Nerve Food, reportedly effective against paralysis, softening of the brain, nervousness and insomnia.  Eventually, carbonated water was added and, by 1884, Moxie was sold in bottle form and as soda fountain syrup.  It had a brief popularity when President Calvin Coolidge claimed to like it and baseball player Ted Williams endorsed it.  It is still sold in the Northeastern United States.  There is even a Moxie museum in Union, Maine, and a summer festival, “All Things Moxie.” Because of the advertising of the soft drink, a new word evolved, moxie, meaning courage, nerve or vigor.

The most popular and well-known species is the fringed gentian, Gentiana crinita (hairy).  Its flowers are open with numerous fringe-like appendages on the lips of the flower lobes.  It can be found in Western North Carolina but it is uncommon.  In a 1940s continent-wide poll, it ranked eighth of the most beautiful wildflowers.  However, the fringed gentian is difficult to grow, is a biennial and is often picked, making it even scarcer.  Its seeds are very fussy, and the plant itself is next to impossible to transplant.  I have yet to find one blooming here and when I learned of several locations, the blooms were already gone.

Finding the stiff gentian prompted Franklin photographer Karen Lawrence and me to try to locate other species.  We did find Gentiana Saponaria, soapwort gentian or harvestbells.  It took some time with the hand lens and reference books for us to identify this wildflower correctly.

The Weakley key again saved the day.  We did not feel so stupid when Weakley admitted that it is sometimes difficult to distinguish between a flower lobe, a flower appendage and a flower filament.  When we were just about ready to give up I found in my library a small forgotten text on Gentians, written in 1975 by Marty Bartlett.  She included a line drawing clearly identifying flower parts.  We are confident that we had found Soapwort Gentian.  Karen and I agreed that Jack Sanders accurately called gentians the nuns of wildflowers as they are tightly wrapped to conceal their inner parts.

Finally on Sept. 28, 2012, after a two-year wait, Karen and I along with a number of Southern Appalachian Plan Society members under the direction of Jim Drake found a field full of the Fringed Gentians.  It was a sight that will be remembered by all of us for a very long time.

Karen Lawrence is a professional photographer of horticultural and wildlife subjects living in Franklin.

Burn ban issued as wildfires break out in WNC