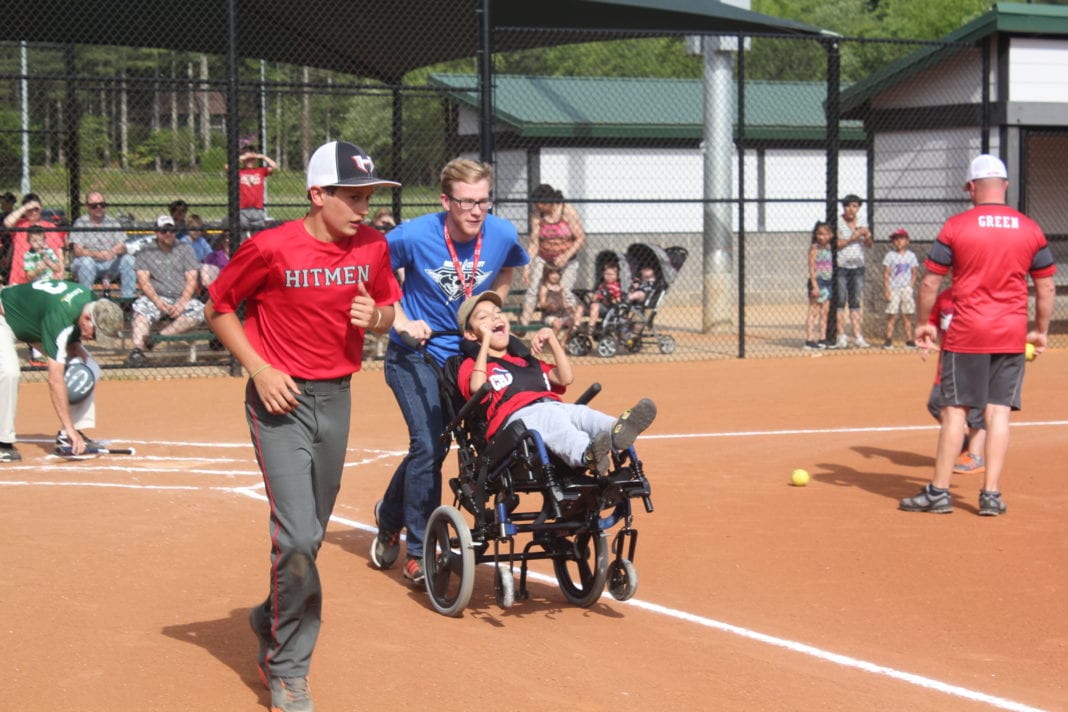 I love my job. I have never wanted to do anything other than write for a newspaper. For as long as I can remember, the only thing I have wanted to do was see my name in a byline. I am incredibly fortunate to be doing what I love each and every day. But even more than getting to live out my dream career, is where I get to do it. I whole-heartedly believe that my job wouldn’t be what it is, something I am so in love with, if it wasn’t for having the opportunity to do it here in Macon County.

The perfect example of the community making my job so rewarding came last Thursday when I had the opportunity to cover Macon County’s second annual Special Needs Baseball Tournament. Teachers, volunteers, and coaches worked with practices to get the athletes prepared for the big games, which allowed the students a chance to get their gloves in the dirt and swing for the fences.

FHS student Angela Mashburn opened the games with the National Anthem. I have heard a lot of National Anthem’s, but hers was my favorite. Not only did I get to spend my Thursday afternoon watching dreams come true on the faces of our future, but I got to do it with my son by my side. I always grew up being told that “it takes a village” to raise a child and until I became a mother myself, I didn’t truly understand that meaning.

I watched varsity baseball players engage with the other athletes, talking about prom and how he would love to have lunch at school with her and her friends. I watched young kids line the fences to high five their special classmates after crossing home plate. Parents and teachers with signs cheering on their players. Just being there, it becomes a part of you, you know it was something unique.

On Thursday, with Turner, my rambunctious almost four-year-old by my side, I moved between ball fields making sure I got as many photos as possible, knowing that the photos would be important for the families watching their athletes participating. Having Turner with me for events like this means the world to me, because as a mother, its a teaching moment. He asked what we were doing and instead of giving him some rhetoric, I had the opportunity to fully explain to him what we were doing. That we were taking pictures of special children playing baseball. That while they may be different from him in some ways, our “city” as he calls it, wanted to make sure they still got a chance to play the same games as he does. Even at four, he understood. And he couldn’t have been more excited to cheer on one of his best friends, Conner Karcher, who fielded grounders and knocked the baseball right past the shortstop. Then after the game, Turner and Conner ran around the bases, kicking dirt and barely touching the corners to get a little more speed before sliding into home. That inclusion, that I got to teach my son because our community went above and beyond to make it happen, may be one of the most important life lessons I teach as a mother. I am forever grateful for the event organizers for giving me the chance to do that.

Another reason I wouldn’t want to do this job anywhere but in this greatest place on earth, is how my community, or this “village” watches over my son. People he has never met took time to call him by name, shake his hand, bust a move with him to the music the DJ was spinning, make a dirt road with his toy car by the dugout, and invite him over to ride horses and play at Vanhook Beach. Turner has never met a stranger, because where we live, everyone is a neighbor, a friend. You don’t find that just anywhere, but where we live, I wouldn’t expect anything less. And when I got a little too caught up in snapping pictures of the athletes rounding first base, Annie Wishon, who Turner has never met but who has a heart of gold for her job with the school system and a love just as pure for Macon County, saw him wandering between the fields looking for me and helped him round the corner to find me.

Our community is unlike any other place on Earth. And while it is so easy to get hung up on the bad things, the mishaps or the negatives, everyone should take a second to find those times where strangers become family. When a community devotes their time and talents to make sure that every student in Macon County has the opportunity to be part of a team and to hear their name over the loud speaker, regardless of their circumstance.

I wouldn’t trade what I do for a living, or where I do it, for anything in this world. I love my village, my community, and am truly blessed to call this place home.