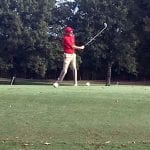 Jason Hedrick had quite a year in 2019. He won a gold medal at the North Carolina state competition for Special Olympics and he achieved gold at the National Invitational Games in Nashville, Tenn., in September. He plans to up his game for 2020.

Hedrick is a golfer and has competed with his coach/friend, Eric Hall, in what is deemed the 9-holes alternate shot competition, meaning they have played as partners with only one golf ball, taking turns playing the strokes. Hall said Hedrick, 44, who has been intellectually challenged since birth, has proven himself a viable competitor on the golf course.

“The last two years we’ve been alternate shot partners,” he said, “but for 2020, Jason will be competing in individual matches and I’ll be caddying for him. Training is similar, but instead of him hitting a shot and me hitting a shot, he will hit all the shots and I’ll just be there to guide him through it. When you conquer what you set out to do, you try to do something different. Now he has a chance to compete individually in the 9-holes stroke play. He will have to compete individually this year at the state level, and if he gets a gold medal there, he should qualify again for nationals.”

Hedrick has been playing golf and competing for at least 20 years, explained Pat Hedrick, Jason’s mother. She purchased a home in Franklin’s Mill Creek Country Club community a few years ago so that Jason could both play and work on the golf course there.

“Tony and Brenda Munger, who manage The Golf Club at Mill Creek, have done so much for Jason,” she said.  “He has come out of his shell and working and competing have helped him mature. He’s developed his own world of support that doesn’t include me having to be with him. Had he not been playing golf, that wouldn’t have happened. This has given him wings. He laughs, talks …”

Weather permitting, a group of about 10 play regularly with Jason at Mill Creek. Plus, they have supported him during past Special Olympics’ competitions, and his mother expects that will continue. “Quite a few people from Mill Creek went to state with us for three days this past year.  He has a gallery of people supporting him at this event – and who play with him every Tuesday, from the spring until the weather turns cold. Several of those guys took their wives and family and went to Charlotte for the state competition … at least 15 people.”

About a half dozen people also accompanied Jason to Nationals in Nashville, Tenn., to watch him receive a gold medal.

“For people to do that,” said Pat, “that just shows such love and support for Jason and Eric. And more wanted to go, but couldn’t because of work and stuff. During these winter months, if it’s a pretty day, the guys come over and get Jason to play with them. Or sometime they take him to TopGolf down in Atlanta, Ga. It’s amazing. When you think the world is bad, trust me there are wonderful people out there.”

Pat Hedrick said Jason has such a large support and fan base that she cannot name them all. Eric’s brother, Wes Hall, and Luke Bateman, are a few of Jason’s regular supporters. “People follow Jason’s competitions on Facebook because Luke puts them on there live. And Luke and his wife, Rhonda, have also gone with us to state.  Jason thinks Luke hung the moon because he puts him on ‘live TV.’”

Hall said Jason has handled well the pressure of competing in 9-holes alternate shot, and he expects him to do well playing as an individual. “For him, it’s like it’s just us out there playing. He doesn’t get too distracted.”

Hall added that he will continue to be there for Jason as a coach and a friend. “He and I have formed a very special bond that goes beyond a coach and an athlete. I consider him family. He goes out to eat with my family and we do other things as buddies.”

And Pat said she will support her son as a competitive golfer for as long as he is able. “I’ll be right here at Mill Creek for Jason to play and work.  I’m very thankful for all of Jason’s opportunities.”

The latest attempt to get WNC up to ‘high speed’