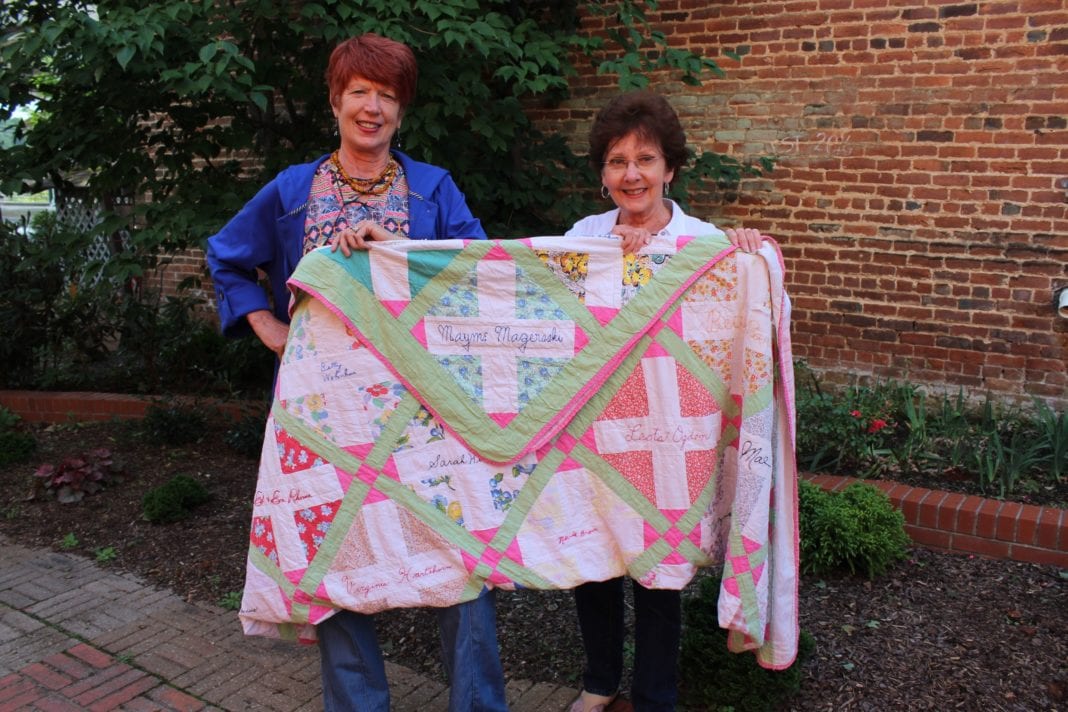 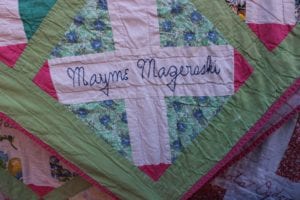 A $25 quilt found at the REACH for Bargains Thrift store a month ago is on its way to Ohio this week, after Macon County resident Mary Kay Barbour tracked down the original owners who consider the family treasure invaluable.

In mid-September, Barbour came across a quilt that had been “dropped off” at the thrift store and just looked out of place hanging on the shelf among items discarded by their previous owners.

“The quilt had 30 signatures on it, and I just knew that out of one of those 30 names, that that quilt would be meaningful to someone who created it,” said Barbour.

Barbour began her search locally, asking the local funeral home if they recognized the names featured on the quilt, but after having no luck, Barbour turned to Google, an internet search engine, which was quick to turn back lots of information on the last name of one of the signatures.

Mayme Mazeroski’s was one of 30 signatures on the quilt and after a quick search on the internet, Barbour discovered that Mayme was the mother of  Bill Mazeroski, who has been touted as one of the greatest Pittsburgh Pirates baseball players to ever swing a bat.

Bill Mazeroski spent his entire 17-year career playing for the Pirates from 1956 to 1972 and was elected into the National Baseball Hall of Fame in 2001. Mazeroski is regarded as one of the greatest defensive second baseman of all time. He was an All-Star for seven seasons and a Gold Glove Award winner for eight seasons. He was a key member of the Pirates’ World Series-winning teams in 1960 and 1971, and is best known for his walk-off home run in the bottom of the ninth inning in Game 7 of the 1960 World Series—the only game 7 walk-off homer in World Series history. Bill Mazeroski continues to serve as special infield instructor for the Pirates in spring training and is retired in Panama City, Fla.

After getting a grasp on who Mayme Mazeroski was, Barbour turned her search to social media, where she was able to track down one of Mayme’s relatives — Barbara Mazeroski Rexroad. From there, Barbour learned that Barbara’s late husband Ron was related to Dianne Mazeroski Milliken. Finding Dianne was a big piece of the puzzle and was able to track down a niece by marriage — Donna Mazeroski Ferris. Donna got in touch with her brother, David Mazeroski, who was able to provide Barbour and Dianne with contact information for Mary Mazeroski Koch, the daughter of Mayme and sister to Bill.

Mayme’s daughter Mary is now in her 80s and was thrilled to learn the quilt has been found.

Mary also specifically recalled her mother Mayme describing the quilt as being a special quilt all those years ago and said that Mayme knew the quilt was special and that she wouldn’t ever quilt something as unique again.

Barbour said the $25 spent on the quilt was nothing compared to how happy the family was to have it back home.

“The first time I saw it, I knew it was special and that I needed to help it find its way home and back where it belongs,” Barbour said. “ It is really great to know that right now, it is on its way to Ohio and will be returned to the family.”

Barbour said that Mary is thrilled to have the quilt back in the family and said she plans to keep it in the family by passing it on to one of her two daughters, Mayme’s granddaughters.