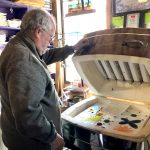 It only took one lesson 32 years ago for John Phillips to be “hooked” on stained glass making. His zeal caught the attention of his instructor at the time and he said she ended up working with him on projects outside of the classroom. After crafting countless individual pieces, residential, commercial, and religious installations, and operating his Fire & Light stained glass store and workshop on Georgia Road for the last 16 years, Phillips is still taking on large projects – including two massive 40-by-60-inch windows for Hospice House Foundation of WNC (HHF).

Phillips spends much of his time teaching stained glass making, answering questions about the process, helping people troubleshoot situations involving stained glass, and greeting customers from all up and down the East Coast. However, Phillips was approached a few months ago by HHF and asked to come up with a design to fill two large window spaces with custom-created stained glass. According to Sallee Coss, a volunteer and board member with HHF, a significant donation was provided to commission the stained glass windows. She and Sara Stevens, another HHF volunteer and board member who is also spearheading the stained glass project, had seen Phillips’ work at McAllister Family Insurance on Siler Road in Franklin.

“His work is just so beautiful,” said Coss. “He’s very gifted and very easy to work with. His stained glass windows installed in the chapel will be the finishing touches.” 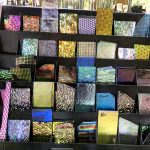 Phillips started the process with Stevens and Coss by listening to ideas. He presented first a small-scale drawing and then a full-scale drawing. After the idea was approved, he helped the parties involved choose colors. The approved design is of a majestic landscape that includes a road, trees, a mountain scene, and a dramatic sunset. For the last few months, Phillips has been cutting the glass to fit onto the layout, which is precisely numbered per the placement of each piece. He likened the glass placement to putting together a giant puzzle.

He estimates more than 100 pieces of cut glass will be included in the windows when they are finished, and the windows will present around 30 colorations.

“The sky, especially, has intense reds and yellows that merge into different blues,” he said.

While he has always been artistic, Phillips said that glass work has given him a unique outlet for creative expression. “I’ve never felt like it was a job, and I’ve just enjoyed every aspect of working with glass,” he said. “It’s not so much about the money. It’s really a labor of love.” 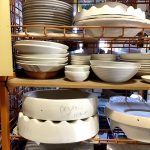 Since COVID-19 affected his business, which he said is now experiencing “steady regrowth,” he has also offered the process of painting and firing ceramics. He sells all the necessary materials and supplies to achieve everything from jewelry to vases to functional platters to window art and more.

“Some of it is labor intensive, but after you get used to it, working with glass becomes a part of you,” said Phillips. “And then it’s like Christmas when you open the kiln. It’s always a surprise as to exactly what heat does to the glass.” 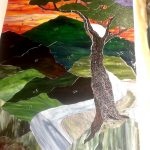 Personally, he enjoys all types and styles of glass work, but he admitted that he gravitates toward Victorian-themed designs and even created a few windows for a Victorian home he once owned. And, he never tires of stopping at museums, churches, glass shops, etc. when he is traveling.

Yet, the Hospice windows, which should be installed by this summer, are “some of the nicest pieces I’ve done, creativity wise,” said Phillips. “And once the light comes through them … it’s a whole different perspective.”

Unrelated health issues may be resolved by a trip to...