Macon County is saturated with Cherokee history, culture – and even mythology. Perhaps nothing is more of a testament to the latter than Standing Indian Mountain, which looms over Highway 64, West Old Murphy Road, and parts of the Appalachian Trail at an elevation of more than 5,000 feet.

Standing Indian is in close proximity to the Southern Nantahala Wilderness within the boundaries of the Nantahala National Forest. Besides being one of the mountains that lies along the Appalachian Trail, it is also the highest point along the Nantahala River.

According to Cherokee legend, the Cherokee name for Standing Indian Mountain is Yunwitsule-nunyi, which translates to “where the man stood.” Cherokee mythology affirms that Standing Indian is home to the remains of a Cherokee warrior, who had been sent to the mountaintop to keep a lookout for a winged monster whose lair was located on Standing Mountain. The so-called beast would swoop in from the skies and steal children. However, the Cherokee prayed to the Great Spirit for assistance and the Native peoples’ prayers were answered when the Great Spirit destroyed the monster and its lair with thunder and lightning. The myth further states that because the lightning frightened the warrior and the warrior abandoned his post, he was turned into stone for his cowardice.

As evidenced by the ancient Cherokee area council house mounds, such as ones at Nikwasi, in downtown Franklin, and another along the Little Tennessee River in Cowee, the Blue Ridge Mountains have been sacred to the Cherokee for centuries. In fact, these mountains have been referred to by Cherokee as “the Great Blue Hills of God.”

However, settlers to the area changed the land’s use, especially when logging became a factor in late 1800s and into the 20th century. In fact, practically all of the Standing Indian Basin has been logged at one time or another.

“Standing Indian was called White Oak Bottoms and this was a logging camp and not the mill. Rainbow Springs, which is down the river where 64 crosses the river, is where the mill was,” said Richard McClure, of the Forest Service, Nantahala National Forest, Nantahala Ranger District. 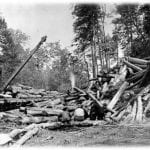 Ritter Lumber Company began construction of a three-story-tall band mill in April 1927, and by September the first logs were sawn. The mill at Rainbow Springs, in the shadow of Standing Indian, could cut about 50,000 board feet per day. According to the W.M. Ritter Lumber Company Family History Book, by 1941 the company had already sold 3 billion board feet of lumber. Spur lines, which are secondary railway lines that branch, were laid and then connected to main tracks so that felled trees could get from the forests to the mill.

Ritter Lumber Company even dammed the Nantahala River to form a pond adjacent to the mill where logs could be cleaned before entering the mill.

Loggers lived in primitive tar-paper-roof camp houses and were paid approximately $1 per day.

Overall, 90 percent of the Nantahala/Pisgah National Forests were clear cut, including the forests that surround what is now Standing Indian Campground. Those forests have been regenerated over the last several decades using a variety of forestation methods.

In the 1960s, the Standing Indian Campground was opened.  It is considered to be one of about 100 different recreation areas within  the Nantahala National Forest. It contains 85 campsites located in the developed campground and three group camps located on Kimsey Creek beside the campground, explained McClure. The horse camp also has about 20 miles of a trail system and stalls for about 12 horses.

“From Memorial Day until Labor Day this recreational corridor is very busy and full for all the holidays,” said McClure.

Most remnants of the logging camp have been taken over not only by dense forests, ferns, mushrooms, wildflowers, and various evergreen foliage, but deer, bear, turkey, and many species of birds are often active throughout the area, pointed out McClure. “And there are three types of trout located in the area streams, such as the rainbow, brown, and native brook,” he said.

Hikers and outdoor enthusiasts know Standing Indian Mountain as a summit to admire. A popular trek starts at Deep Gap parking area, on Forest Service Road 71 off Hwy. 64; from there it is a 2.5-mile hike up the Appalachian Trail to the summit. From the Standing Indian Campground, it is a 4.1-mile hike up the Lower Ridge Trail and a 0.1 mile-hike up the Appalachian Trail, for a total hike of 4.2 miles.

A map of the trails is available at the Standing Indian Campground store.

“It’s extremely important for the general public to have a place to go and enjoy the outdoors,” said McClure, commenting on the importance of Standing Indian today.

The recreational area is closed for camping from Dec.1 till April 1. However, hikers are welcome year-round.