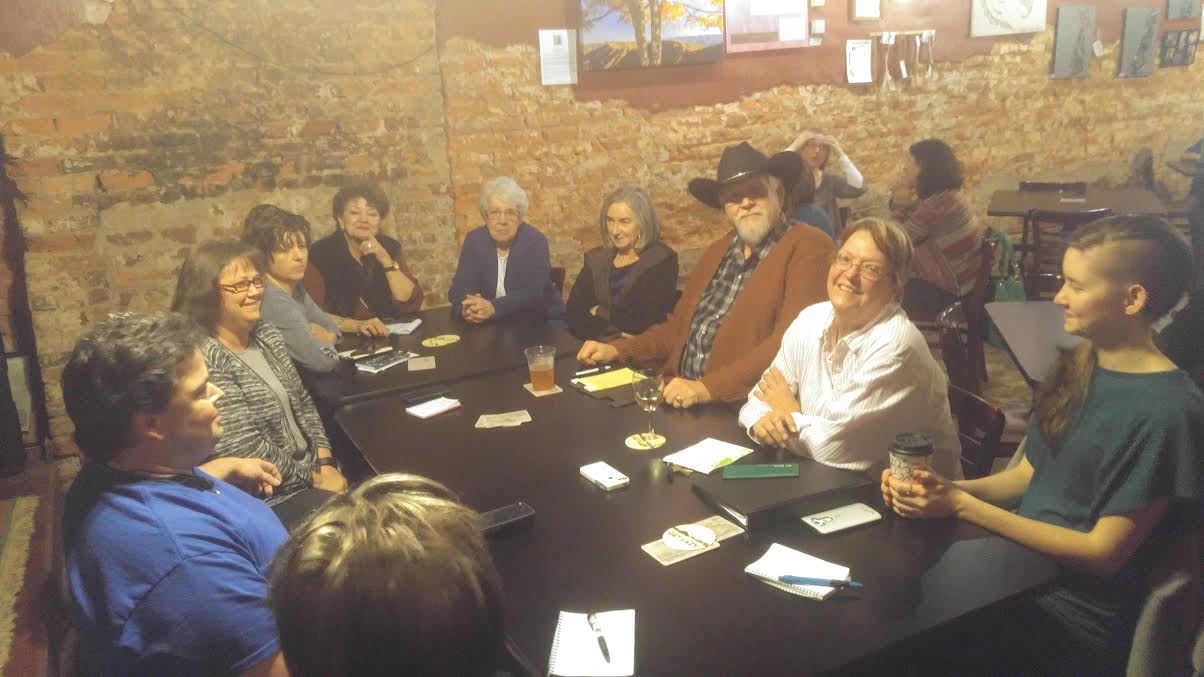 Franklin’s Main Street is the life’s blood of the town and serves as the focal point of Macon County year-round. When the town of Franklin eliminated their events coordinator a few years ago, long standing traditions such as the annual Mother’s Day quilt festival fell by the wayside and Main Street merchants were left to figure out how to get more foot traffic into their stores.

That is when Linda McKay, owner of NC Mountainmade started to rally other business owners to reprise Streets of Franklin, an organization geared toward the self promotion of downtown. Heading into its third year, Streets of Franklin met on Tuesday night to discuss the organization’s future and upcoming events.

McKay, who serves as the president of Streets, outlined the group’s priorities, which are to ensure there are activities and events downtown at least once a month, typically coinciding with holidays, to keep Main Street business year-round.

Airing of the Quilts was originally started by members of the community and when Linda Schlott worked for the Town of Franklin as an Events Coordinator, the event was aided considerably by the town in both terms of funding and organization. When that position was eliminated, those wanting to continue the event were at a loss as to where to start and took a year hiatus. The Main Street merchants were able to keep the event going, but with other larger festivals such as the Folk Heritage Festival held in July, the job of planning, organizing, and funding the Airing of the Quilts Festival is a task too large for the half a dozen Main Street merchants who are active in Streets.

The event brings thousands to downtown Franklin to view the more than 100 quilts lining the sidewalks. Handmade quilts are a labor of love; for centuries they have been lovingly crafted, treasured, and preserved for generations of families to enjoy. Some crafted to provide warmth and comfort, and others as a symbol of family history and heritage, but all are admired as a masterpiece of time, love, and dedication.

Historically, after a long winter indoors, Appalachian families would take the quilts outside in the spring to “air them out.”

Advertising the event in a quilt magazine and around WNC is costly, and Streets doesn’t have a source of funding other than a one-time grant they received from the Franklin Tourism Development Authority in the amount of $3,000, which helped fund both Airing of the Quilts and the Folk Heritage Festival. On Tuesday night, Streets of Franklin decided to move forward with hosting Airing of the Quilts again this year, and plan to apply for funds from the TDA again, but McKay and Streets are in need of volunteers to help make the event successful. Members of Streets own and manage businesses, so ensuring the festival receives the attention to detail it deserves is difficult.

To help raise funds for the events and festivals Streets have planned for 2017, the merchants plan to request the town to allow for the closing of Main Street one Saturday morning in early April for a community yard sale.

“We can rent an eight foot space for $20 for a “Spring Cleaning” community yard sale,” said McKay. “People can have a space anywhere from the Gem Museum all the way down to Motor Company Grill and the money raised will help fund the advertising and promotion for our festivals.”

The group plans to rent the yard sale spaces for $20 and will handle the promotion of the event to help get people downtown.

Streets of Franklin is also gearing up for the third annual Appalachian Heritage Festival. When Schlott’s position was eliminated with the town, the long standing Folk Festival hosted by the Macon County Folk Heritage Association found themselves scrambling to keep the event organized without the town’s help. After a year off, the event organizers made the decision to move the festival to Cowee School. While the festival is continuing, having the festival outside of town took away from the economic benefit the festival brought to merchants. Two years ago, Streets of Franklin organized the first annual Appalachian Heritage Festival, to promote the county’s history, while bringing people into Franklin to shop.

Scheduled for the third weekend in July, the third annual Appalachian Heritage Festival is quickly becoming a premier festival in Macon County and something vendors, residents, and visitors all enjoy.

Streets of Franklin meets monthly, with its next meeting scheduled for Tuesday, Feb. 21, at 6 p.m at the Rathskeller. If you are interested in volunteering with Streets for Airing of the Quilts, contact McKay at NC Mountainmade.