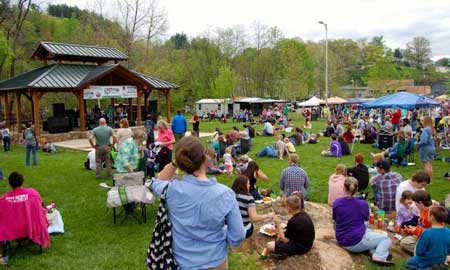 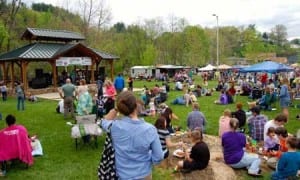 With Sylva preparing for its annual Spring Festival, Greening Up the Mountains, festival-goers will see a new addition to the event now that alcohol sales are permitted at some special events.

Earlier this month, Sylva officials voted to approve an amendment to the town’s alcohol ordinance, paving the way for alcohol consumption and sales at special events to be approved on a case-by-case basis.

“The ordinance was amended April 7,” explained Sylva Town Manager Paige Dowling. “Greening up the Mountains will have an area on Mill Street where people can have Heinzelmannchen beer as part of the Crawfish Boil.”

The ordinance revision was approved after a public hearing with town commissioners voting four to one in favor. Sylva Commissioner Harold Hensley cast the opposing vote. Hensley cited his reasoning opposing the revision as town events, specifically those held at the town’s Bridge Park Pavilion as being family events where alcohol shouldn’t be consumed.

“The town has always had requests to have alcohol at events at Bridge Park,” said Dowling. “The past year or so the requests for weddings and other events became more frequent. In February, Commissioner Mary Gelbaugh asked town staff members to look into the possibility of allowing alcohol at special events. Shortly after, business owners started talking to other board members.”

During the town’s public comment period brewery owners in Jackson County spoke out in favor of the revision, citing increase in tourism and economic incentives. John Duncan, owner of The Sneak E Squirrel Brewery, asked commissioners to consider being able to capitalize on the craft beer market thriving in Asheville.

“The town is hopeful that the amendment will lead to additional events being scheduled at the park,” said Dowling.

The ordinance revision calls for a case-by-case application for alcohol at special events. Dowling explained that businesses or an entity sponsoring an event would be required to approach the town before the anticipated event for approval.

“The entity sponsoring the event along with the entity selling alcohol would come before the Sylva Town Board on a case-by-case basis and ask the board to allow alcohol at that event,” said Dowling. “The town board would decide whether to approve the special event permit on a specific date and the location. This change does not mean that alcohol will be sold or served at every event, the amendment gives the board the flexibility to approve alcohol at certain events.”

After the board approved the alcohol ordinance revision, Sheryl Rudd, co-owner of Heinzelmannchen Brewery in Sylva submitted a request on behalf of Heinzelmannchen, Sneak E Squirrel and Innovation Brewing to serve beer at Eric’s Fresh Fish Market’s crawfish boil scheduled for Saturday. The request allows alcohol during the boil, which is scheduled to take place from 10 a.m. to 4 p.m. Hensley voted against the request, with the other four commissioners voting to approve it.