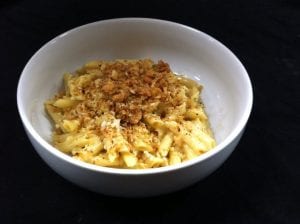 Creekside Oyster House and Grill has been open in Sylva since 2013, but after taking the reins in 2015, owner and Chef George Neslen has been working to listen to his customers to improve the menu. Part of Neslen’s creativity and classically trained talents led him to develop a Lobster & Truffle Mac N’ Cheese, which he submitted to Restaurant Magazine’s recipe contest. Neslen impressed the judges and won “best side dish” in the contest.

“The contest was sponsored by Testaurant Inc. magazine that is published by Rinehart foods distributors,” Neslen said. “My sales rep from Rinehart foods brought me the entry form one day. There were five categories. Best burger best cocktail best appetizer best side dish and best dessert. My lobster and truffle mac & cheese entry was selected as a finalist in January and then ultimately chosen as the grand prize winner to be published in the magazine and receive a $2,000 food credit with Reinhart foods.”

Reinhart Foods is a nationwide food distribution service, serving from North Dakota to Louisiana and From Vermont to North Carolina. The annual recipe contest generated more than 200 submissions, which were narrowed down to 25 finalists. From there, Reinhart Foods turned to corporate chefs to recreate the recipes from a  culinary center in Chicago’s Lincoln Park neighborhood. A panel of expert judges graded each dish on taste, originality, appearance and texture, and from the 25 finalists, the winner for best appetizer, best burger, best side dish, best dessert, and best cocktail was selected, with Neslen securing the best side dish category.

“I had two reactions to winning the contest,” said Neslen. “The first reaction was when I found out I was a finalist; I got a phone call early in the morning before the restaurant was open from the corporate headquarters. I was absolutely ecstatic to find out that I was a finalist and had the potential to win the grand prize. After finding out that I was a finalist I had to wait over two months before I found out who won the grand prize. I was informed of my winning the best side dish prize one morning when the president of Rinehart foods Knoxville, came and visited my restaurant to announce the prizewinner and try the dish for himself. After finding out that I won, I was as much relieved as I was excited for winning. The waiting game had been agonizingly long and consumed my thought process on almost a daily basis.”

Creekside Oyster House offers lunch and dinner service Tuesday through Sunday. “I work with multiple food distributors in addition to Reinhart in order to get the best products delivered as frequently as possible,” said Neslen. “Our vision for the dining experience at Creekside Oyster House is one that is based on customer delight. We want our patrons to have an enjoyable experience from the time that they walk in the door to the time that they leave our parking lot.”

Neslen’s winning dish starts with a thick Alfredo sauce of cream, garlic, cheddar and Parmesan and then gets house-made lobster salad of juicy lobster meat, sauteed onions, celery, and juice and zest from lemons and an orange. Neslen blends all the ingredients with pasta before finishing it off with a truffle oil and toasted panko breadcrumbs. Then the dish is baked before serving.

New, fresh menu items like his Mac N’ Cheese truffle isn’t the only change Neslen has implemented since taking over the restaurant. “We have made several changes at Creekside since I took over ownership; this includes changes to the food as well as the decor and the front of the house,” he said. “We have changed the beer and wine selection to offer several local beers and craft beers as well as wines that pair well with the foods that we offer. These beers and wines that we added to our selection are also being incorporated into the food that I prepared to enhance flavors and the pairings of food and drinks. I’m in the final stages of and a revised menu that will include several composed entrées and really original food that I’m excited to cook. All of the popular staple dishes on the menu are not going anywhere but I have added New dishes that will be fun to cook as well as eat. New menu iTems will include a sesame tuna steak, fresh grilled salmon, and duck.”

Nestled on Scotts Creek in Jackson County, with a 15 ft patio and live entertainment, Neslen is working to build an atmosphere as decadent as his menu. “When dining at Creekside Oyster House customers should expect to receive friendly service with a smile, and food that has had a lot of care and love put into it when being prepared,” he said. “Returning customers should also expect to see progress. We have set big goals to make a truly great restaurant. And the path we set to achieve those goals is making small changes for the better every day. There are plans for major renovations (leveling the floor) and we have already done some painting and I just used the savings from winning the contest to purchase new bar stools.”