I’m a sucker for clickbait. I’ll log onto the internet to check the weather and the next thing you know, I’m reading about “Child Actors Gone Bad,” or “Yellowstone Supervolcano – Ready To Blow.” Nevertheless, my latest case of “taking the bait,” is at least seasonally appropriate. According to a recent survey, “27 percent of people would ‘rebrand’ Santa as gender other than male.” It’s one of those “what’s the world coming to?” kind of declarations, sure to get folks, such as myself, riled up. However, the poll sounded dodgy, so I waded through a few different articles to get to the headwaters of this stream of disinformation. Behind the hype, was a tongue-in-cheek online survey conducted by a small website. Through repostings by various news organizations and numerous bloggers, this survey ended up getting national traction and reaction. The whimsical theme of the survey conducted by the logo-making company, GraphicSprings, involved ideas for updating Old St. Nick’s image. There were also silly suggestions such as Santa driving a flying car (22% favoring) to wearing skinny jeans (18%), but those didn’t appear to make the grade as headline worthy. The 27% gender re-branding figure comes from adding the answers in the survey question, “If you could ‘rebrand’ Santa for modern society, what gender would he be?” 10% answered “female” and 17% said “gender neutral.” They could have asked what animal Santa should be and the headline might have read, “35% Consider Santa To Be a Non-Human Life Form.” Father Christmas is no stranger to controversy but at least there was substance involved. The question of whether or not we tell our children that Santa Claus is real has always been a tricky ethical dilemma, worthy of serious discussion. It isn’t an artificial wedge issue designed to pit conservatives and progressives against each other, but it could be. Instead of an accurate headline of “According to poll: Most parents are honest with kids about Santa Claus’s existence,” it could be provocatively reworded into, “Majority of parents favor depriving children of the wonder of Christmas.” Of course, the purpose of a headline is to entice the reader, and there is nothing new about that. While digital content may be free, it is nevertheless monetized by advertising revenue. Clickbait typically leads to trivial topics but an increasing amount is geared toward appealing to the cultural rift in our society. We tend to follow stories that support our worldview and the advertisers know this. Divisiveness sells. The Santa survey certainly isn’t scientific polling, nor does it claim to be. It doesn’t have some kind of profound meaning, indicating the fall of western civilization as we know it. However, in a society where public opinion is swayed by reading headlines, it might be helpful if more of us develop the habit of diving a little deeper into a story after taking the clickbait. Merry Christmas and Happy Holidays! Contact George at georgehasara@yahoo.com. 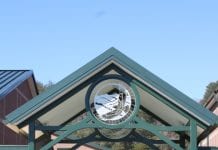 Thrifty is the new ‘cool’