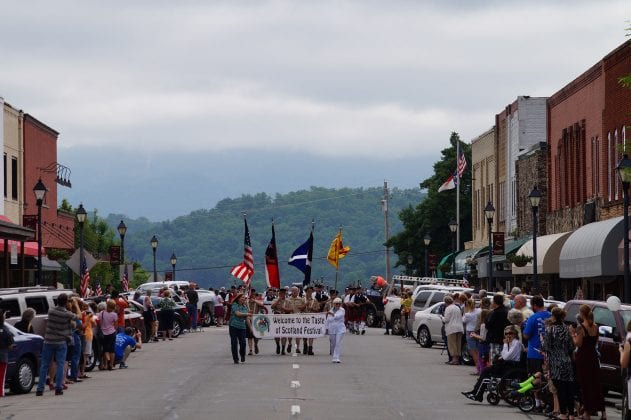 It’s time for the annual Taste of Scotland and Celtic Festival held every Father’s Day weekend in downtown Franklin. This year’s festival, set for June 13-16, has a packed schedule with some new twists.

The Gathering, formerly called The Clan Dinner, will be held on Thursday, June 13, at 6 pm., at the Tartan Hall of First Presbyterian Church. The dinner will be catered by Martha’s Kitchen.  A special ceremony will be held to crown Little Miss Tartan. The honored clan this year is Clan MacLaren, Dave Patterson, convenor.

The entertainment for The Gathering promises to lively. On tap will be the Jacobites by Name, a Taste of Scotland favorite, and Celtic step dancer Kinsey Brooke will give a solo performance.

Kinsey Brooke is an Eramus Mundus Scholar and graduate of the Eramus Mundus Joint Master degree program – Choreomundus International M.A. in dance Knowledge, Practice, and Heritage. She earned her M.A. in Dance Knowledge, Practice, and Heritage.  She earned this degree is residency at a consortium of four universities: Universite Clermont Auvergne (France), the Norwegian University of Science and Technology(Norway), the University of Szegel (Hungary) , and the University of Roehampton (England). An avid step dancer, her research centers on cultural anthropology, dance transmission methods, and preservation strategies  strategies of intangible cultural heritage.  Kinsey also holds a B.A. in English Literature and a certificate in British and Irish studies from the University of Georgia.

Kinsey Brooke will be a solo performer  at the Gathering this Thursday, and. will give free dance lessons from 5 to 6 before the Ceilidh this Friday, and give dance lessons to the children Saturday, as well as giving a historical presentation at Franklin town hall meeting room.

A bucket auction and a 50/50 raffle will also be featured at The Gathering. The doors will open at 5 p.m.; and dinner starts at 6.  Tickets are $25 for adults and $15 for children  12 and under.  Tickets may be purchased at The Scottish Tartans Museum and Heritage Center, Inc.

Three new offerings are on the schedule for Friday. First, historian, Barbara MacRae will give an informative talk about the Women’s History Trail at the meeting room in town hall at 4 p.m.

Catered food will be available at 6 p.m., along with a time to eat, talk, meet old or new friends, and get ready for The Blarney Girls from 7 to 9. The Blarney Girls will entertain the crowd with singing, accompanied by their proficiency on the fiddle and guitar. This is a night to relax, kick back, and enjoy talking and dancing with old and new friends.

After the sun goes down, Highland Videoworks will offer a multi-video projection on Main Street on The Scottish Tartans Museum and Heritage Center from 8 to 10 p.m.

The Annual Braveheart 5K & Rob Roy is set for Saturday, June 15. The race begins and finishes at town hall. Race day registration begins at 7 a.m. Rob Roy Fun Run is for runners 10 and under and starts at 8 a.m.; Braveheart 5K, 8:30 a.m.

Opening ceremony begins at 10 a.m. at the Franklin town gazebo, with a parade to follow.  Line-up for the parade is at 10:30 at the parking lot behind town hall.  The parade will start at 11 a.m. Visitors are invited to join in and march in the parade and be part of Franklin’s annual celebration of Scots-Irish heritage. The honored clan this year is  MacLaren, Dave Patterson, convenor.   Also involved in the parade will be the Breacann Clann and the John Mohr MacIntosh Pipe Band.

Stroll the clan village after the parade, check out what the vendors are offering, get some food and drink, and enjoy the entertainment at the gazebo at posted times during the day. Breacan Clann will be demonstrating a camp and will be dressed in period costumes on the lower grassy area of the town hall.

Entertainment will be featured at the gazebo throughout the day with Jim and I, John Mohr MacIntosh Pipe Band, Highlands Pipe & Drums, Nikwasi Dulcimers, Amy Vining, and The Blarney Girls.

During the afternoon will be historical presentations in the town hall meeting room. Charlie Rhodarmer will speak on “18th Century Clothing” at 1 p.m.; and at 2 p.m., Kinsey Brooke will discuss Celtic Step Dancing in Atlantic Canada as it was adapted from Ireland and Scotland.

Children’s activities will be scattered throughout the town. Face painting will be offered outside the Dusty Pallet during the day.  Children will be breaking geodes and mining outside the Gem and Mineral Museum.  Children will also have a grassy area to try Children’s Highland games, climb and decorate Nessie, complete craft activities, and take home puzzles and coloring sheets. There will also be photo ops with posters to poke your head in and become a highlander, Nessie and a Scottish family and more.

The Boy Scouts will offer some athletic games for the tweens and the teens at the lower back grassy area of the town hall. One of the favorite attractions will be behind the town hall with the border collies and the coos.

Kirkin’ of the Tartans will happen at First Presbyterian Church on Sunday, beginning at 10 a.m. The “Kirkin’ o’ the Tartans” is a ceremony in which God’s blessing is sought for the tartans worn by the Scots. Then at 3 p.m., Jacobites By Name will present a concert.