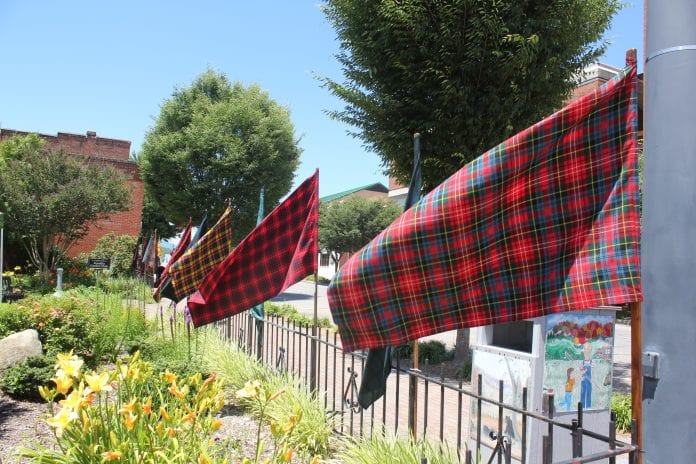 The streets of Franklin were transformed over the weekend, to celebrate the annual Taste of Scotland & Celtic Festival. Traditionally held each year during Father’s Day weekend, the festival celebrates the area’s Scottish heritage with fun, games, food, music and much more.

The annual festivities kicked off on Thursday night with the traditional Clan Dinner at Tartan Hall in the First Presbyterian Church. Scottish music commenced throughout the day on Friday with  entertainment for all ages at the gazebo in Town Square.

The annual Braveheart 5K and one mile fun run, hosted by Bringing it to Life Productions was held early Saturday morning, with proceeds going to benefit the Scottish Tartans Museum.

Opening ceremonies for the Saturday festival were held at the gazebo stage, with a parade featuring Scottish clans, the honor guard, local Boy Scouts, bag pipers and the 2016 Little Miss Tartan, Laurel Laseter.

Demonstrations of Bill Coburn and his border collies were held throughout the day at Town Hall, where the Scottish bull Erick the Great was on display. Scott Medlin & Company once again attended the festival to demonstrate traditional Highland games such as the caber and hammer throw in the field at the corner of West Palmer and Porter Streets.

To incorporate the transitions of the Cherokee and their involvement in early Scottish heritage in Macon County, Cherokee performances were held in the Palmer and Porter Streets’ field. Mike Crowe with the Friends of the Cherokee Museum brought demonstrations and Cherokee stories, weaponry, fire making and dance. Demonstrations included blow gun, tomahawk and knife throw, weaving, fire starting, and flint napping.

Local business giving back to the community this prom season