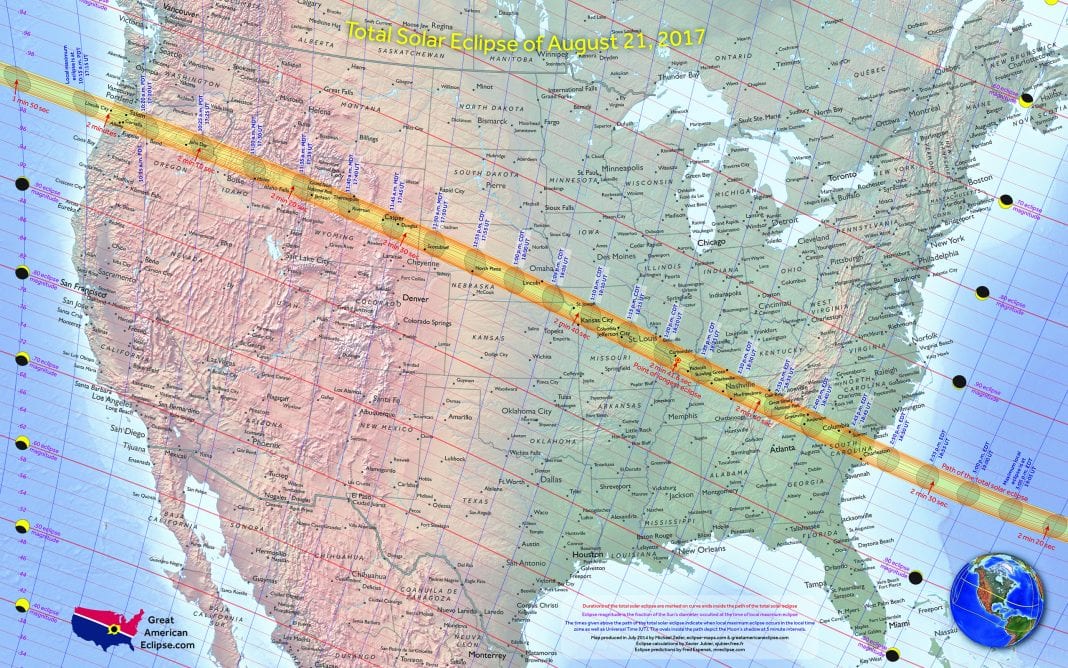 Just over 300 days are left for hundreds of thousands of people from around the world to decide where they will be viewing the 2017 solar eclipse and leaders in Franklin hope they choose Macon County. Monday night the Franklin Tourism Development Authority unanimously voted to begin looking at how the TDA can help promote the event and allocate funding for such.

The last total solar eclipse was visible nearly three decades ago on February 26, 1979 and the next won’t occur until April 8, 2024. A total solar eclipse will be visible Aug. 21 in a path that stretches from Oregon to South Carolina, with Franklin being in the path of totality for the eclipse.

According to NASA, the path of totality for the 2017 eclipse is a relatively thin ribbon, stretching just around 70 miles wide. The first point of contact will be at Salem, Ore., at 17:17 Coordinated Universal Time (UTC) or 10:17 a.m. PDT. Over the next one and a half hours, it will cross through Oregon, Idaho, Wyoming, Nebraska, Kansas, Missouri, Illinois, Kentucky, Tennessee, Georgia and North and South Carolina. It will leave the United States near Charleston, S.C. where maximum totality will occur at 18:47 UTC or 2:47 EDT.

A total eclipse means that in the middle of the day, the skies will be pitch black dark. During totality, observers can see dramatic reddish-orange tendrils of solar plasma dancing around the edges of the moon. These solar prominences are anchored to the sun’s surface as they snake out into space. A total solar eclipse is the only time they can be seen with the naked eye.

The amount of time that totality lasts depends on where you are along the shadow’s path and how close to the center of the shadow you are. The longest duration of totality will occur in the Shawnee National Forest of Illinois, lasting 2 minutes 41.6 seconds. Franklin will be one of the few towns along the path of totality when it will be dark for more than two minutes. WIldlife react to the event, street lights come on, and the entire mood for the more than two minutes will be unlike anything ever experienced before.

Roughly 12 million people live within the narrow band of totality in the United States, but according to NASA, experts believe that 220 million reside within a day’s drive of it and those plus more are expected to travel to the areas that are expected to experience totality.

Candy Presley and Connie Grubermann, both lodging owners and/or managers who serve as members of the TDA said they have already received reservations for the event and started getting calls in August 2016. Lodging around the country for areas in the path of totality are already selling out. Franklin TDA and other town and county leaders are tasked with not only ensuring Franklin is a destination for the once-in-a lifetime experience, but while they have a captive audience, they market Franklin and all it has to offer in addition to being a viewing location for the event.

The Macon County Public Library has secured a $50,000 grant for an astronomy program which will be used to educate the public on the Great American Eclipse, and the Nantahala National Forest officials will be responsible with maintaining safety and crowd control as the highest peaks in Macon County will be among some of the best possible viewing locations of the eclipse in the entire country.

Franklin’s TDA plans to look at national advertising in astronomy publications, blogs on their website to promote Franklin as an eclipse destination and look at a local billboard counting down until the event.

“So often I think we wait for organizations to come to us and ask for help or funding, but I think this is a great opportunity for us as a board to be proactive and lead the charge in promoting Franklin,” said TDA member Timothy Crabtree.