Over the last few months, County Attorney Chester Jones began reviewing the county’s contract with both the Franklin chamber and the Highlands Chamber of Commerce, as the contracts are up for review and renewal next year. After reviewing the contracts, Jones made recommendations to both entities to ensure they were meeting the obligations outlined in the contracts.

“In the meetings that I had with representatives of the county, the TDCs and the Chambers, we carefully went though the applicable paperwork to make sure that all understood how these matters were to be functioning under the terms of the law and the paperwork,” said Jones. “I think my main advice was for them to take the documentation that I provided, as well as the documentation for the Highlands Chamber TDC , review it carefully, make sure all members of the TDCs and Chambers reviewed the same carefully,  make sure that they were familiar with the same, and make sure that they are operating within the rules set up by the same.”

At no point during the review process was the TDC stripped of any powers or responsibilities. Jones noted that for such an action to be taken, the board of commissioners would have to have requested a change. Instead, Jones simply suggested how the entities can be more in line with the county’s expectations.

“The commissioners would have had to take any such action in an open meeting,” Jones said in response to assertions that the TDC was stripped of funding power. “As you know, that has not happened. Second and in short, I was asked to do a ‘check up’ on how these TDCs  were operating under the law and their paperwork. I did so and found that there were some things which I, as county attorney, needed to advise concerning in order for the county, its budget officer, the TDC and the Chamber to be performing their respective roles and responsibilities more closely to the way that the TDC was set up to operate. I did so. There has been no stripping of the TDC of any funding powers.”

In the past, the TDC has made recommendations to the chamber of commerce regarding grant requests from organizations and individuals doing things to promote travel and tourism in Macon County. While the TDC made recommendations on such requests, the Chamber of Commerce would fund the requests through the budget established for the room occupancy tax dollars allocated to the chamber from the county. Jones informed the TDC that it was not their responsibility to make recommendations on specific grant requests, but rather oversee the overall budget and produce a marketing plan for the room occupancy funds.

Franklin Area Chamber of Commerce Executive Director Linda Harbuck, who sits on the TDC as a non-voting member, noted that the TDC will continue to oversee the budget and marketing strategies of the TDC. The TDC will no longer make recommendations regarding grant requests. Beginning next week, the Chamber of Commerce’s new committee formed to hear grant requests will now take on that responsibility. Harbuck explained the new committee will meet the fourth Tuesday, the first meeting being held at 11 a.m., and will be comprised of TDC and Chamber board members and will include representation from both the Franklin and Nantahala areas.

“We wanted to get the new committee started immediately because the most important thing to us is that there is no lapse in service in regards to providing travel and tourism,” said Harbuck. “We have grant requests that have already been submitted and we want to be able to take action on those.”

There is nothing in the rules or responsibilities the says the Chamber or TDC has to provide grant funds to community groups or businesses in regards to tourism promotion. The practice of approving grant requests was something established by the TDC and while it isn’t required, Harbuck said she wants to continue that practice.

Jones said that moving forward, he believes the relationship between the county and chamber will continue to be a good one that accomplishes what it has been able to for the last 10 years.

“This partnership was established to promote travel and tourism in the county and its important to note that that has always been accomplished and has been done well,” said Jones. “Moving forward, we can aim to have things better in line with how the contract was first written while both groups continue to work well together. 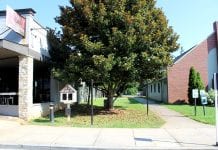 Lynn named Firefighter of the Year for second time