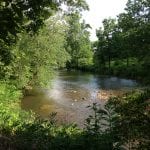 For 10 years, a former church camp sat empty on 10 acres along the Cullasaja River. Men’s Teen Challenge of the Smokies leased the campus, with an option to buy in 2015.

“We have hoped we could buy it for some time,” said Executive Director Mike Barres. “We just found out a couple months ago that it would be possible.”

The purchase of the property by Men’s Teen Challenge of the Smokies becomes official on July 18.

“The purchase will be through the North Carolina Assemblies of God loan program,” explained Barres. “The loan is at 0%, with payments of $2,000 a month. The property deed will be in our name right away at closing.”

The original Teen Challenge was launched in 1958 in Staten Island, N.Y., by Pastor David Wilkerson who conducted street rallies during which gang leaders and members’ lives were transformed when they learned about the gospel of Christ. Today, Teen Challenge International has grown to include more than 200 programs, numerous evangelism outreach centers in the United States, and 1,400 centers in 122 other countries. All Teen Challenge centers, including Men’s Teen Challenge of the Smokies, operate autonomously.

All men in the 12-month program are involved in group studies, personal studies, Bible study, counseling, chapel, and work. Life skills and coping skills are taught to give men “new tools” to handle the stress and problems of life, according to Barres.

Men’s stories are similar regarding how they find and are helped by Men’s Teen Challenge of the Smokies. Recently featured in the organization’s newsletter was John Blaine, 45, who shared how he became addicted to opiates after undergoing multiple surgeries. He lost a long-standing job, relationships suffered, and he began purchasing drugs from dealers.

“Since I’ve been at Teen Challenge, my relationship with the Lord has been restored,” said Blaine. “I’ve also seen my relationship with my wife and children restored. I’m excited to live for the Lord, and about what He has planned next. Pastor Mike and Mrs. Betty [Barres], through their vision and obedience, have created an oasis for hurting souls to find rest and restoration through the Word of God.”

When the organization began renovation of the former camp in 2015, at least 250 volunteers restored dorms, education rooms, and a picnic area with a basketball court, a dining hall, an industrial kitchen, offices, a gym, an auditorium, and more.

“It took us almost a year to fix it up; it was in terrible disrepair,” said Barres.

Since the initial restoration and cleanup effort, Barres said additional projects have included closing in the picnic shelter, constructing a wood shop, and filling in the pool for the area to be used as a garden.

“We also have completed four cabins for the graduates to live in after graduation,” said Barres. “We have two more to complete. In addition to vocational training in construction and wood shop, we will soon be adding auto mechanics, due to a new volunteer. We are hoping for the donation of a metal carport that would be large enough for our vans to fit under.

“We have made somewhere between $250,000 and $300,000 worth of improvements,” he added. “That is unusual for a rented property. Owning it will protect that investment.”

Although the sale price of the camp is more than $1 million, North Carolina Assemblies of God has agreed to match dollar for dollar what Men’s Teen Challenge of the Smokies raises – through donations and monies generated through its thrift store on Hwy 441, donations from area churches, clubs and private citizens.

“That means that once we pay $567,000, the property is ours free and clear,” said Barres. “It is our desire to pay [the amount] off so that we can continue to be free of debt and our money is free to be used to help men gain freedom from addiction. We have already begun to receive donations toward this purchase.”

Men’s Teen Challenge of the Smokies operates with a staff of six, plus two interns. Student population averages between 12 to 18 men.

The first graduation ceremony at Men’s Teen Challenge of the Smokies happened in August 2018. Upcoming graduations take place Saturday, Sept. 7, and Saturday, Oct. 5, at 3 p.m. in its auditorium, 336 AG Camp Road. Barres invites the public to attend to encourage the men. For information on how to get involved, visit mtcots.com.

Schools to Re-open With In Person and On-line Classes