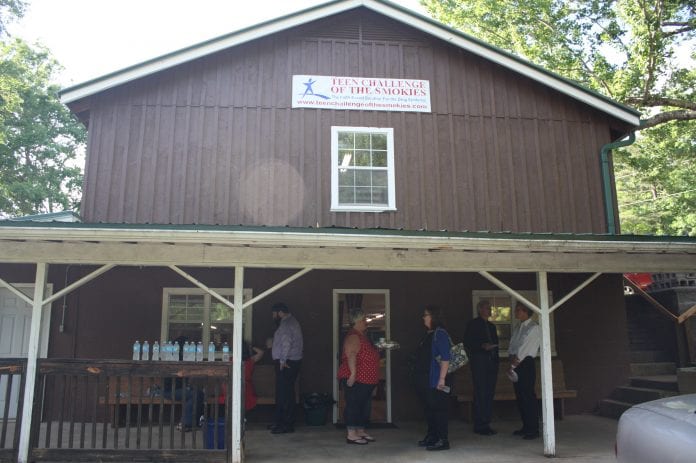 On Saturday, May 21, the staff of Men’s Teen Challenge of the Smokies united with supporters and interested citizens of Western North Carolina to celebrate and dedicate the opening of the men’s addiction recovery facility now housed in the old Camp Cullasaja Campgrounds off Highlands Road. The opening ceremony was held in the Tabernacle, followed by a reception in the cafeteria and self-guided tours of the grounds.

Executive director Mike Barres led the celebration in a time of praise and worship and then spoke to the assembly about the events leading up to this day.  He said the opening of the faciility here in Macon County is the “culmination of a long time of vision, prayer and hard work.”  He also characterized Teen Challenge as “an unapologetically Christian organization dedicated to discipling those caught in addictions, to teach them new Biblical life and coping skills.”  Teen Challenge has one of the highest success rates of addiction recovery with facilities not only in the United States but also worldwide.

Barres’ dedication theme centered on a Biblical passage from the book of Isaiah 61:1-3.  “The spirit of the Lord God is upon me, because the Lord has anointed me to preach good tidings to the poor, He has sent me to heal the brokenhearted, to proclaim liberty to the captives and the opening of the prison to those who are bound; To proclaim the acceptable year of the Lord, and the day of vengeance of our God; to comfort all who mourn, to console those who mourn in Zion, to give them beauty for ashes, the oil of joy for mourning, the garment of praise for the spirit of heaviness; that they may be called trees of righteousness, the planting of the Lord, that He may be glorified.” (New King James Translation)

In his remarks, Barres took the singular ‘me’ and ‘I’ from the passage and applied it in the cumulative ‘we’, placing responsibility on all people who call themselves Christians to step up and be involved in reaching souls who want and need hope, healing and liberty from addictions.  It is the duty of the followers of Jesus to love, to comfort and to console people in need, to bring faith and joy to those who despair, he said.

And from Isaiah 61:4, “And they shall rebuild the old ruins, they shall raise up the former desolations, and they shall repair the ruined cities. . . . .” Barres likened this passage to that vision, prayer and restoration of Camp Cullasaja for God’s ministry.  Many years ago Fred and Noreen Sorrells founded the campground as a place of ministry and, now, it has been revived, restored and repaired to once again be a holy place of God offering healing both for the physical addictions and for the souls of men.

Beginning in December 2014 with a seemingly chance stop at the Teen Challenge Thrift Store on Highway 441 North, on the Jackson County side of Cowee Mountain, the seed of this ministry was planted and has now culminated in the reality celebrated on the campgrounds on Saturday.  Looking back, Mike and his wife Betty, both talk freely about the obstacles and the miracles of God that have occurred bringing them to this point.

Careful attention has been given to having all the repairs and restorations done to  meet building codes.  Men, women and children have come to give their time and resources to work on the buildings (mainly the dining hall and dormitory building).  A total of 244 volunteers have given thousands of hours laboring to get the work done on the building.  They came individually and in busloads, all dedicated to bringing this ministry of hope into fruition.

The repairs and restoration were done under the watchful eye of the volunteer construction coordinator, Harold Johnson.  Harold’s roots with Teen Challenge run deep and with a heartfelt vision for this project, he began working four days a week in August 2015, accumulating more than 1,200 hours of volunteer labor.  Then in November, a man named Jim Weed showed up and although he didn’t like to paint, he said he would come back and help.  Since then, he has worked alongside Johnson four days a week.  These two men were given plaques at the open house honoring their contribution to the work.

Unveiling a sign naming the dormitory/dining hall the “Harold E. Johnson Building,” Barres said that Johnson was not only a laborer, but that he was a man of vision, a prayer warrior and a friend.

The final step preparing for the opening had nothing to do with the physical property, but bringing in a qualified staff to work with the men who would come here.  Macon County native Phil Sanders was the first staff member to be hired.  Sanders’s relationship with Pastor Barres goes back to his high school days here in Franklin.  Barres eventually was able to get Sanders into the Teen Challenge of the Mid-South in Chattanooga, Tenn. Upon graduation from the program, Sanders served as a staff member at the Mid-South for 15 years.  When Barres approached him about returning to Franklin, he agreed to come as the new program director and, in December 2015, he moved his wife Jill and daughter Hope into their new home on the campground. His wife is also a graduate of the Teen Challenge program in Chattanooga.

The last two pieces of the staffing puzzle were put in place recently as Barres hired two interns to complete his team:  Jordan Whaley, a graduate from Teen Challenge in Pensacola, Fla., and Dean Reynolds, currently a senior at Toccoa Falls College, in Toccoa, Ga.   They are in the training phase of their internship being prepared for opening day.

A number of applications are being processed in anticipation of an official opening date of Monday, June 6.  Then the real work begins for the permanent staff, the work of bringing new hope and life to men who have lost all hope.

As the work continues, the need for volunteers and resources will continue to grow also.  Anyone can contact Men’s Teen Challenge at PO Box 2157, Franklin, NC, by phone at (828) 524-2157, or email at mbarres@dnet.net.  Their website is www.teenchallengeofthesmokies.com  and they can be found on Facebook:  Men’s Teen Challenge of the Smokies.

Macon County Historical Museum a reminder of a bygone era