Another year is half gone and it appears there’s no end in sight for America’s fight against drugs and addiction. While support for the national war on drugs couldn’t be higher, its casualties on the opioid front go on unabated. At the same time however, authorities are 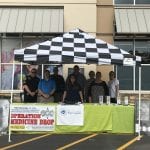 now reporting the return of an old foe—methamphetamine.

In Macon County, the insurgence of either drug promises to endure well into next year.

The Protracted Battle Against Opioids: One Of Attrition?

The death toll of the ongoing opioid epidemic is expected to rise again in 2018. New figures released in March by the Center for Disease Control indicate another increase in fatal overdoses.

“This fast moving epidemic does not distinguish age, sex, or state or county lines, and is still increasing in every region of the United States,” said CDC Acting Director Anne Schuchat, MD. “Up until now, we’ve been reporting on the tragic loss of life from opioid overdoses, but for every fatal case, there are many more nonfatal cases, each one with its own emotional and economic toll.”

From July 2016 through September of last year, ER visits (reported by 52 jurisdictions in 45 states) for suspected opioid overdoses increased 30 percent overall, and 35 percent in 16 “hard hit” states that possess a high prevalence of overdose deaths, according to the report.

Data shows significant increases in fatalities across the board, despite efforts in recent years at the local, state and federal levels to curb the trend of opioid overdoses. The report illustrates how ineffective state and federal laws have been at disrupting the ongoing crisis. It also highlights how deeply the epidemic’s death grip actually is on the throats of communities big and small, in virtually every region across the U.S.

Five states in the Midwest region have experienced significant losses of life, the largest being in Wisconsin, which saw a 109 percent increase in the death rate. Illinois came in at 66 percent and Indiana at 35.

To the Northeast, the highest rate increase of opioid deaths was found in Delaware, which shot up 105 percent from last year, followed by Pennsylvania, at 85 percent. Maine saw a 34 percent increase in overdoses.

In the Southeast, North Carolina saw the highest increase, at a recorded 31 percent in the region. The report shows Kentucky experienced a 15 percent decrease.

Every demographic group reported rate increases. Males saw a 30 percent increase, while females came in at 24 percent. All age groups have been represented in this data. The rate increase was 31 percent in people ages 25 to 34, 36 percent in ages 35 to 54, and 32 percent for those ages 55 years and older. The highest opioid overdose rate increases occurred in larger cities, at 54 percent, with a population of at least 1 million.

“Opioid overdoses continue to increase in most jurisdictions, and rapid response efforts and a multisectoral approach are needed to reduce and prevent overdoses and their associated morbidity and mortality,” said Dr Vivolo-Kantor, author of the study.

But despite the grim outlook, the North Carolina Department of Health and Human Services (DHHS) announced at the end of May that the state is beginning to see success in its efforts to combat the opioid crisis. Citing county health figures collected across the state, DHHS attributed the “success” to the reduction of oversupplied prescription opioids, while access to treatment and recovery services has increased.

In the fourth quarter of 2017, 20 million fewer opioid pills were dispensed statewide, compared to the same period the year before when 141 million were distributed. Data also indicates more people are receiving care through medication-assisted treatment, coupled with clinical treatment services, for substance use disorder.

“The opioid data dashboard is a powerful tool for health care providers, community coalitions and everyone involved in turning the tide of the opioid crisis in North Carolina,” said DHHS Secretary Mandy Cohen, M.D. “While we are encouraged by these early metrics, our data shows that we still have a lot of work to do.”

Approximately 22 victims of overdose were saved via naloxone reversal kits with the help of Emergency Services last year. Approximately 10 reversals occurred in 2016.

While these trends appear to be nearly universal throughout the entire rest of the state, legislators in Raleigh are continuing their fight against the crisis with similar methods as they have in the past. On May 30, a team of North Carolina elected officials, including Macon County Senator Jim Davis, announced a new law enacted to “confront the opioid epidemic.”

In essence, the HOPE Act promises to strengthen the consequences for healthcare workers who steal, dilute, or substitute a patient’s drugs; give trained investigators appropriate access to prescription data and records to improve investigations; fund an additional SBI special agent to coordinate local drug investigators; expand and strengthen the Controlled Substances Reporting System by adding data on veterinary drugs, National Provider Identifier information, and the name and ID of a person receiving Schedule II or III drugs; clarify that fentanyl trafficking is covered by drug trafficking statutes; invest $10 million a year in community-based drug treatment and recovery services; invest $1 million a year in naloxone to protect law enforcement officers and the citizens they serve and invest $160,000 in Operation Medicine Drop to safely destroy unneeded prescription drugs.

“I’ve been hearing for years from law enforcement, including my friend Chief Bill Hollingsed, that we need to give law enforcement the tools they need to confront this crisis in our communities,” said Sen. Jim Davis. “I’m proud to sponsor this bill to do just that.”

“Families all across this state are dealing with the tragedy of losing children, parents, siblings, and friends,” said Sen. Tom McInnis. “We owe it to them to take every step possible to stop the spread of these deadly drugs.”

“There is no single answer that will end the opioid crisis,” said Attorney General Josh Stein. “We have to constantly look for ways to reduce supply and demand of these dangerous drugs. Last year, this group worked together to reduce over-prescription so that fewer people become addicted and fewer pills are in circulation. I’m proud to once again join this bipartisan group to further reduce the supply of opioids. The HOPE Act focuses on smart enforcement to stop the spread of these deadly drugs on our streets.”

“Law enforcement officers are on the front lines of confronting this crisis in their local communities,” said Rep. Craig Horn. “They must have access to critical data that will allow them to conduct thorough investigations and put dealers and traffickers behind bars.”

“Today, with the HOPE Act, the medical community joins hands with North Carolina’s law enforcement community to help them in their efforts to combat the illegal activity that fuels this crisis,” said Rep. Greg Murphy. “Law enforcement officers need access to prescription data in real time so that they can investigate in real time. Minutes and seconds matter when it comes to opioids.”

On Saturday, another prescription pill “take back” event was held throughout the county—one in Franklin, and the other in Highlands. Organized by the county’s Public Health Section Administrator Lynn Baker, the event was like every other one to come before it—successful. It ended up drawing enough of a response to collect approximately 13,700 doses of old, assorted prescriptions. The Highlands event collected a total of 11 pounds.

Yet despite the continued uptick in opioid-related deaths, Baker was nevertheless encouraged by the turnout to the Saturday event.

“MountainWise of Macon County Substance Use Task Force has come a long way in its efforts to increase education and prevention initiatives in our community,” she said. “Through prevention activities, such as the Medication Take Back Event, the Task Force is using education programs like the Lock Your Meds Campaign to educate residents.  The Lock Your Meds Campaign was implemented in direct response to the current opioid epidemic.  Its objective is to raise awareness about the importance of assessing, disposing, and/or securing your prescribed medications properly to reduce access to them in the home. “

Medication Take Back services are available Monday through Friday, 8 a.m. to 5 p.m. at three locations in Macon County—the Sheriff’s Annex and the Police Departments of Franklin and Highlands.

In Part 2 of Macon County News’s The Dope Game, read all about how some users of opioids also use methamphetamine.