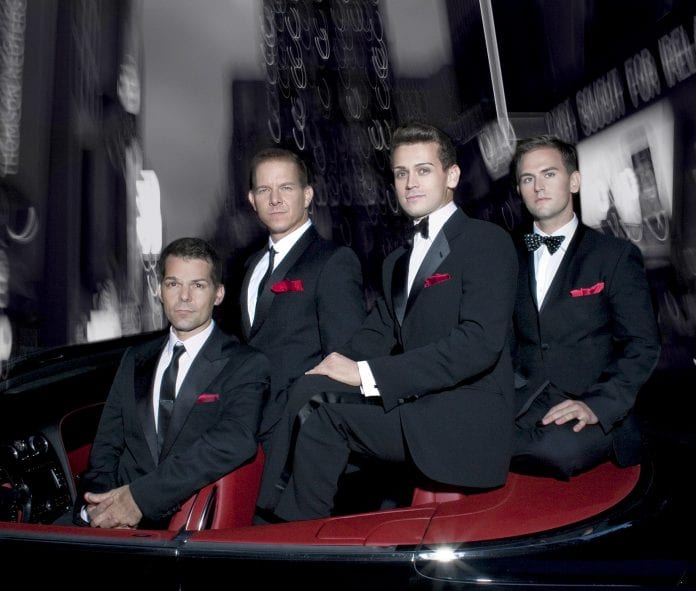 Over the last eight years, Bobby Spencer said he has toured all over the world at more than 700 concerts. And while he has performances on the White House lawn and at the US Embassy in China to his credit with his fellow members of The Midtown Men, he is just as excited to be taking the stage in Franklin this Saturday night.

“We want to to take the stage wherever we are and provide great entertainment,” said Spencer. “For 90 minutes we want to make the audience smile and help them to forget the real world.”

Spencer is just one member of The Midtown Men, a high-energy musical group that includes four stars from the original cast of Broadway’s Jersey Boys.  They celebrate the best sounds and performances of the iconic Four Seasons, as well as many other legendary groups and musicians from the 1960s.

The Midtown Men is the first vocal group ever formed by the principal cast of a high-profile Broadway show.  Tony Award winner Christian Hoff, Michael Longoria, Daniel Reichard, and Tony Award nominee J. Robert Spencer have shared the stage at over a thousand performances.

Their signature sound and chemistry delights audiences everywhere as they bring to life the greatest hits of the sixties while backed by a phenomenal seven-piece band.  Some of their most popular performances include hits such as, “Big Girls Don’t Cry,” “Build Me Up Buttercup,” “Happy Together,” and “California Dreamin’.”

Spencer’s routine to get ready for the show varies from set to set, but one thing he always makes sure he has time for, is a jam session on the drums. As the group’s drummer, Spencer said making sure he has time before each show just to sit down and play the drums is all he needs to get ready to take the stage.

This multi-talented group released a self-titled debut album full of golden oldies and received critical acclaim for their efforts.  They also garnered 5-star album reviews across iTunes.  Their explosive new live recording, The Midtown Men: Live in Concert, and their companion DVD/Blu-ray video is following suit.  Another live performance by The Midtown Men at the New Jersey Performing Arts Center was recorded in partnership with PBS and can be viewed on public television stations broadcasted nationwide.

The Midtown Men create a dynamic concert featuring top hits from superstars such as The Beatles, The Beach Boys, The Temptations, The Jackson 5, and more. Showtime is set for 7:30 pm and tickets start at $33 each.

To purchase tickets to see how they are lifting audiences of all ages to their feet in venues across the continent, or to find out more information about this or any other show at the Smoky Mountain Center for the Performing Arts, visit GreatMountainMusic.com or call (866) 273-4615.