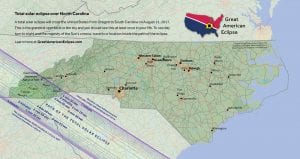 On Aug. 21, NASA says there will be a total solar eclipse visible across the United States with the complete totality of the longest duration viewable from many local communities in Western North Carolina including Macon and Jackson counties. Franklin is one of the few communities in the entire country that will be in the direct path of the Great American Solar Eclipse.

From Oregon to South Carolina, cities inside the 40-mile-wide path of the solar eclipse will experience darkness in the middle of the day. This is the first time in 26 years that America has seen a total solar eclipse. Communities in the path of totality will still see quite a show, with a near-total eclipse producing a “diamond ring” effect.

Around 2:30 on Aug. 21, the disc of the moon will move fully in front of the sun, casting a shadow across the Earth’s surface. The sky will turn dark, the air will cool, animals may well act as if it were nighttime and stars will be visible, according to Matt Cass, principle investigator for the Smoky Mountains STEM Collaborative and science department chair at Southwestern Community College.

The business community is also gearing up as it could be one of Macon’s busiest days ever. From branding special glasses needed to safely view the eclipse to selling out all lodging, Cass told Macon leaders that proper preparation is needed to handle the thousands of people expected to flock to the region.

“You have to prepare for a lot of people, so take whatever number you have in your head and double it, because that is probably more accurate,” said Cass.

Jackson County is working to develop events, specific viewing locations, public safety and accommodation promotions specifically for the eclipse event. In fact, Southwestern Community College in Sylva secured a 1.5 million dollar NASA cooperative agreement, and a major focus of year two of the five-year agreement will be promoting safe and educational viewing of the solar eclipse.

“Our goal is for everyone in Jackson County to experience a safe viewing of the eclipse by way of solar viewing glasses while understanding the mechanics of the solar system that make such events possible,” said Cass,

One significant concern for the event is public safety. SCC officials cautioned Macon leaders on the  need to prepare for thousands of people which may require traffic control and may require the additional assistance from highway patrol and even homeland security. While the eclipse will last just over two minutes in Franklin, the crowds are expected to be in the region for the entire weekend. 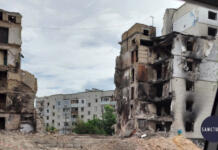 Help is on the way for small businesses