Following a ruling by a three-judge panel in Wake County on Tuesday, candidate filing for the 2022 election will resume on Feb. 24, 2022.

“State Board of Elections staff will immediately begin preparing for the continuation of the candidate filing period, including securing a location to ensure the health and safety of staff and candidates,” said Karen Brinson Bell, State Board executive director, in a press release. “We will provide all details to the public as soon as possible at NCSBE.gov and through an announcement distributed to the media.”

A three-panel judge ruled Tuesday evening that North Carolina’s redistricting maps will not be tossed out.  In their ruling, in Wake County Superior Court in Raleigh, N.C., the three judges agreed that both the legislative and congressional maps were “a result of intentional, pro-Republican partisan redistricting.” The Wake County Superior Court Judges stated in their ruling that the maps are not unconstitutional, regardless of the partisan advantage they may give Republicans.

“Were we as a Court to insert ourselves in the manner requested, we would be usurping the political power and prerogatives of an equal branch of government,” wrote Superior Court Judges Graham Shirley, Nathaniel Poovey and Dawn Layton. “Once we embark on that slippery slope, there would be no corner of legislative or executive power that we could not reach.”

The 258-page decision comes in response to three law suits filed challenging the new maps, which were drawn and approved the North Carolina’s Republican majority in the General Assembly.

“Declaring as unconstitutional, an act of the branch of government that represents the people is a task that is not to be taken lightly. There is a strong presumption that enactments of the General Assembly are constitutional,” the ruling stated.

Redistricting tied up courts for nearly a decade after the state’s maps were last redrawn — something that is likely to occur again. Challengers are expected to appeal the court’s Tuesday decision immediately to the state Court of Appeals or directly to the state Supreme Court, which in December halted candidate filing and delayed the primary election from March to May to allow for these suits to be tried and appealed.

As part of Tuesday’s ruling, the judges set a schedule to reopen candidate filing for all races across North Carolina, however, they also issued a separate stay of the schedule to allow the case to be appealed.  Candidate filing will now resume on Feb. 24, per the ruling.

The new congressional map would give Republicans control of as many as 11 of the state’s 14 House seats, compared to the party’s current eight-to-five edge. (North Carolina gained a 14th district as a result of population gains in the 2020 census.) 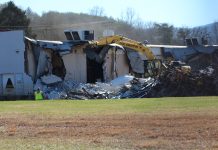 Out with the old, in with the new – old Walmart comes down