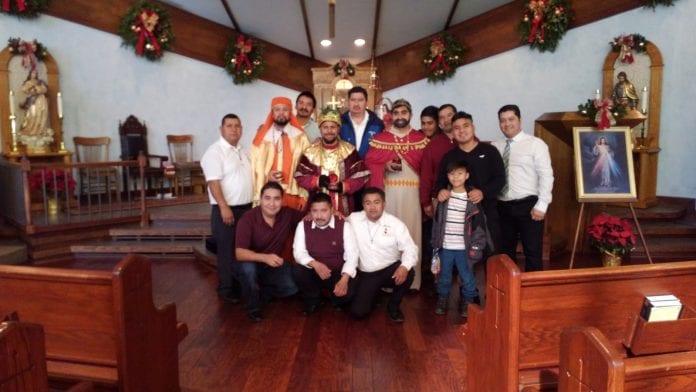 Local Hispanics have a duel challenge during the holidays: Santa Claus and the Three Kings. “In Mexico, every state has its own celebration,” said the Vera Cruz native, who dressed as Caspar — the bearer of myrrh – for a post-mass celebration outside St. Francis Catholic Church on Sunday. Balloons, sweets and gifts – sponsored by the Emaus group, which promotes family values — accompanied the arrival of the Three Kings, dressed in flowing robes of shining red, green and orange. Some even wore face paint to enhance the appearance of full beards from the desert travelers.

Many local Hispanic children were born in the United States and never experienced the tradition of their parents’ homeland. But for the three men who dressed as the reyes magos Sunday, like the face paint, the tradition doesn’t just go away.

For Mora, his children get gifts on both Christmas and Three Kings Day, “So that both traditions stay alive,” he explains.

Miguel Ortega, 43, had all but abandoned the Mexican tradition for his twin 11-year-old son and daughter until he dressed as Melchior this year — bearer of frankincense, the fragrance placed at specialized incense altars as described in the Old Testament.

“Last year my children asked me when the three señores would come with gifts,” said the native of Guanajuato, Mexico, in a Spanish-language interview. “They didn’t even know what they were called!”

The children took to Google to learn about these gift-bearing gentlemen and how they might benefit.

“Normally, they learn about the tradition in church,” he said, noting that it has not been taught locally. “Now, the church is starting to revive the tradition.”

Father Tien Duong helped with a Spanish and English-language mass Sunday that explained the story of the Three Kings from the Bible, and the significance of their gifts to the newborn king. As described in the Gospel of Matthew, the Three Kings reached Bethlehem after following a star across the desert for 12 days. Each of their gifts represented a different characteristic of the newborn King: gold, his royal standing; the fragrance frankincense, his divine nature; and myrrh, used to embalm bodies after death, foreshadowed Jesus’s death.

Ortega participated in a Three Kings event in Sylva Saturday, handing out pieces of traditional rosca de reyes, or a pastry made with figs, quinces, cherries or dried and candied fruits. The Kings were also showered with attention, hugs and photo requests.

In Franklin, the Kings gave out less-than-traditional pizza and received a lukewarm response, still not bad for three men who had allegedly been following a star in the desert for 12 nights.

“What is important to them is the gifts, from wherever they come,” Ortega said. “But what we want is to reintroduce the tradition.”

Macon Valley Nursing and Rehab Drive by for residents