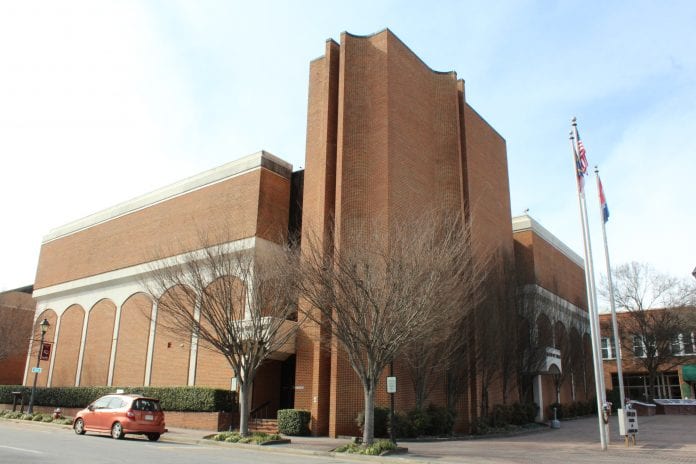 Jason Stamey of Franklin pled guilty to assault by strangulation, assault on a female, felony flee to elude arrest with a motor vehicle, assault on a law enforcement officer inflicting a serious injury, two counts of assault with a deadly weapon on a law enforcement officer and having attained habitual felon status. Judge Coward handed down a sentence of 83 months minimum (6.9 years) to 112 months maximum (9.3 years).

Macon County Sheriff’s deputies were called to a residence on Parsons Way in Franklin for reports of a domestic argument. Deputies spoke with Stamey’s girlfriend who alleged that she had been assaulted and was strangled by Stamey. She stated that Starney left the residence and provided a vehicle description of the vehicle he was driving. Macon County Sheriff’s deputies encountered the suspect vehicle and when trying to stop the vehicle, Stamey gave chase driving recklessly almost striking non-law enforcement vehicles, at times driving into oncoming traffic, and speeding as high as 95 miles per hour in a 55 mile per hour zone as he was trying to flee. During the course of the chase Stamey repeatedly braked his vehicle almost causing an intentional collision with two patrol vehicles. The chase ended when the defendant went into a cow pasture and crashed into trees at the tree line at the top of the pasture. Stamey fled on foot and during his later apprehension fought with deputies, causing one deputy to suffer a broken hand as Stamey was being placed under arrest.

Stamey also was charged federally with drug offenses out this event. He currently awaits sentencing in Federal Court in Asheville.

Macon County Sheriffs deputies were investigating the theft of a 2005 Suzuki motorcycle, and had received a tip that the motorcycle was in the possession of Thomas. Detectives followed up and did in fact find the motorcycle in Thomas’ possession. Later Thomas admitted to deputies that he knew the item was stolen. The latter unrelated charged of malicious conduct by a prisoner resulted from a fight that broke out at the Macon County Detention Center between several inmates and detention officers in January 2019.

Macon County Sheriff’s Office detectives received a tip from Rabun County, Georgia authorities that Suder and a co-defendant were at a residence in Macon County cooking methamphetarnine. Suder was living in a residence with two apartments, and the person living in the adjoining apartment disclosed to detectives they could smell an odd odor coming from the other apartment. When deputies walked up to Suder’s apartment in plain view were items commonly used in the manufacture of methamphetamine: a plastic milk jug with a hole in the cap with plastic tubing attached, as well as a one gallon container of muriatic acid and a burned package of lithium batteries. Muriatic acid and lithium are known methamphetarnine precursor chemicals. Detectives were granted a search warrant to enter the apartment and later found other precursor chemicals as well as several grams of methamphetamine where the defendants had used what is commonly known as the “one pot/shake & bake” method of manufacture.

Released by the office of District Attorney

Board declares state of emergency

Community reaching out to help their neighbors in need