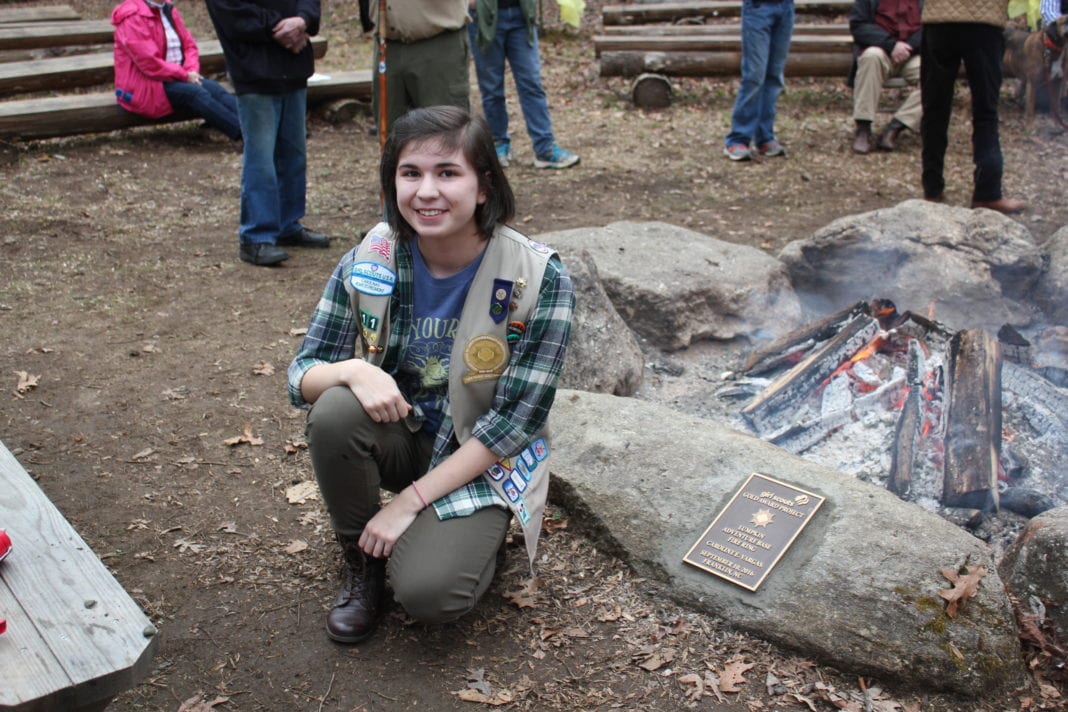 When Caroline Vargas was just seven years old, she signed up to be a Girl Scout. She became part of the millions of girls from around the world who joined an organization geared toward building girls of courage, confidence, and character, girls who make the world a better place.

“When I started going to weekly meetings, my troop had lots of girls in it and I became friends with all of them,” said Vargas. “We went on tons of field trips, including discovery museums, live shows, and we even went to Savannah, Ga., where we got to meet pirates and went to the beach and got to go inside Juliette Low’s [the founder of Girl Scouts] house. We learned so many skills, like how to make candy, create fun crafts, and how to play ‘Sardines.’ I looked forward to every meeting, and I wish my troop had stayed together longer. I have a lifetime membership, so I will always be a Girl Scout.”

Founder Juliette Gordon Low organized the first Girl Scout troop on March 12, 1912, in Savannah, Ga. After more than 100 years, the Girl Scouts continues to empower the youth of America and that was evident on Saturday at Lumpkin Adventure Base Camp when Vargas celebrated earning her Gold Award.

“The hardest part of the project was filling out the final report paperwork because I didn’t keep track of times and dates during workdays. I didn’t expect the project to take three years to complete, making it even harder to remember every event that happened,” said Vargas. “My favorite part of the project was getting the team together to make the project a reality. So many people were involved, and I couldn’t be more thankful for their help. It was also really satisfying to know that every decision was either my own or at least run by me so I was in control the whole time.”

Vargas set out to complete her Gold Award in 2015. The Gold Award is the highest award one can earn in Girl Scouts and Vargas wanted to complete a project hat would have a lasting impact on her community. With the help of her dad, Charlie Vargas, and fellow members of both the Girls and Boy Scouts, Vargas decided to build a council ring at the Lumpkin Adventure Base Camp, a camp located in Macon County frequently used by regional scouts.

“As a Girl Scout, I have had a lot of experience with camping,” said Vargas when first setting out to design her project in 2015. “A big fire is a symbol of camping and campfire activities, which are a big part of a great camping experience. I wanted to bring that experience to Lumpkin Adventure Base.”

A central camp fire pit, or Council Ring, is used for more than just cooking meals and roasting marshmallows. Campers use campfires as a place to sing songs, play games, tell stories and perform skits. The Council Ring also serves as the main centerpiece and gathering place for the camp, and can serve an important part of ceremonies.

All materials for the Council Ring and seating Vargas created were found on the property. The Council Ring was designed to be a large fire pit surrounded by stones, and features a flat area next to it for various ceremonies, entertainment, etc. Seating for the ring was made from split logs found on the Lumpkin property and circle the fire ring.

On Saturday, friends and family gathered around the council ring to celebrate Vargas’ completion of her Gold Award. Vicki Baldwin, one of Vargas’s Troop leader’s, who had the honor of pinning Vargas with the Gold Award, spoke of Vargas’ diligence and dedication to the scouts.

“The Gold Award is the highest achievement in Girl Scouting,” said Baldwin. “lt expresses Caroline’s special commitment to herself, her community, her world and her future. I also want to say it shows a commitment from Caroline’s family as well. They have supported and encouraged her every step of the way. I know this fact to be true firsthand, so I congratulate Charlie, Laura, Michael and Matthew along with Caroline today.”

With 10 years of scouting, Vargas has too many memories to pick just one favorite. “My favorite memories in Girl Scouts will always come from my trips to Girl Scout Camp Pisgah in Brevard,” said Vargas. “I spent seven years as a camper, two as a Counselor in Training, and this will be my third year on staff. As a camper, I learned how take care of myself and become more independent. I learned how to use a bow and arrow, and a few years later I got my certification in archery. As a staff member, I have worked with scouts from all over the world, including Australia, Cambodia, Ireland, the Netherlands, the UK, and Wales.

“One of my favorite memories comes from this past summer when I witnessed a camper see fireflies for the first time. All of the other girls were getting ready for bed, so no one would walk with her so she could see them up close. I walked with her, and I will never forget the look on her face when she saw them. After a few minutes of chasing fireflies, the other girls started to join in and soon the entire group was walking with us.”

Vargas’ love for Camp Pisgah may be one of the many reasons she has chosen to attend Brevard College in the Fall. Vargas will be graduating from Macon Early College this year, and while she was accepted to Warren Wilson College, Young Harris College, and Brevard College, Vargas has selected Brevard College.

“I have learned so much as a Girl Scout, and the best way to learn is by doing,” said Vargas. “I am still learning how to work with all kinds of people, how to adapt to different surroundings, and how to handle conflicts. Most importantly, Girl Scouts has taught me that there is no stopping point, and you have no limits. Finishing my Gold Award Project is not the end of my time as a Girl Scout, and it is definitely not the beginning. It has only added to my experience and understanding of how to be a good leader and how to get things done.”