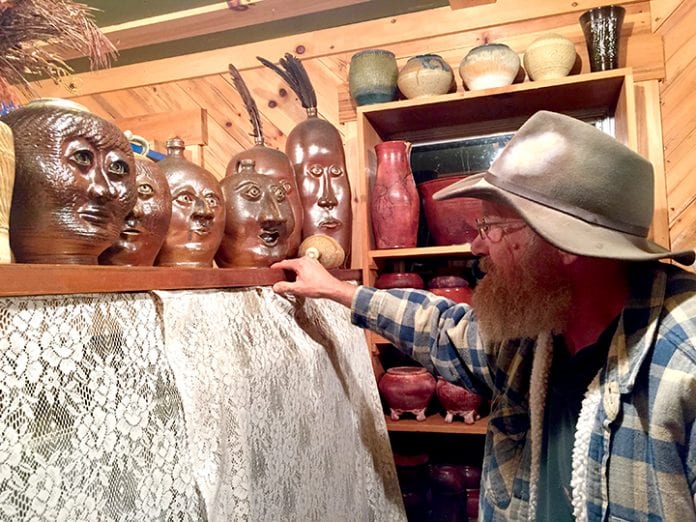 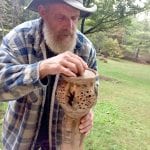 Franklin native Doug Hubbs caught the pottery bug in his Franklin High School art class. It was the early 1970s and the school had one low-fire kiln and a wheel. Throwing fever directed his academic path and he focused on art while attending Western Carolina University.

However, Hubbs knew a career in pottery would unlikely support a family, so he worked as a carpenter and eventually became an electrician. While he and Patti, his wife of 39 years, raised their two daughters, he stifled – for the most part – his urge to throw clay. He made some pots and plates occasionally, purchased select pieces, and hobnobbed with other regional potters whenever possible. After taking a re-introduction pottery class through Southwestern Community College in 2005, he decided to focus intently on the craft. 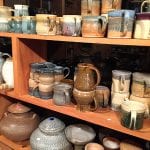 On the grounds of his Lower Burningtown home is a large shed that Hubbs converted from his daughters’ playhouse to his gallery/warehouse space. He believes he has at least 1,000 pieces – everything from plates and cups to Turkish cookware and teapots – displayed on shelves. He also has a collection of “friendly” face jugs and has named each one.

In his home, alongside his own work, is pottery by other potters he admires. He and his wife primarily eat and drink from plates and cups he fashioned. His daughters have many of his pieces in their homes.  Hubbs still has a 1974 piece he made while at WCU: a large pedestal candleholder that was a gift to his mother, now deceased.

“Pottery is a really nice thing to give to friends and family,” he said. 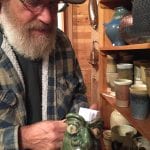 Hubbs admitted he is a “pottery addict.” He gleans ideas while teaching students Fridays at Cowee Pottery School in the Cowee School Arts & Heritage Center and on Tuesdays and Thursdays at Swain Arts Center. He also watches other potters and studies photographs of finished pieces. He attends conferences – one in Italy a few years ago to learn from well-known Pittsboro, N.C.-based potter Mark Hewitt; and, he peruses pottery-focused festivals, such as the upcoming WNC Pottery Festival, Saturday, Nov. 3, on Front Street in Dillsboro, where 40-plus potters will exhibit wares. Hubbs will assist one of the coordinators, Joe Frank McKee, who is also a potter, with raku firing.

When he “throws,” which means to essentially work the clay on the wheel, it is in the classrooms where he teaches. He does not have a private wheel and kiln. He likens the process of learning to work clay on a wheel like “learning the scale on a musical instrument. You learn it, and then you can play any song.” 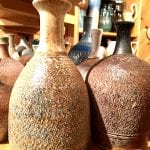 While the clay form is important, just as vital is the design/decoration, the selected firing process, and the chosen coloration/glaze. Doing pottery well requires an understanding of chemical reactions and formulas as well as the effects of high heats on the clay forms. His pieces are finished employing a range of firing techniques from raku to bisque to fumed to low or high-reduction stoneware. Some pieces are also pit-fired.

“I’m always learning … always sharing,” said Hubbs, who typically throws around 25 pounds of clay (and up to 50 pounds) each sitting. He primarily purchases clay, but pointed out that Macon and surrounding counties have some of the finest clay deposits – it is just a matter of property owners allowing potters to gather the clay. In fact, according to the historical marker on Bryson City Road, in 1767, famed English potter Josiah Wedgwood obtained from the Cowee area a sample of clay known by the Cherokee as “unaker” for its white color. Wedgwood recognized the fine-grained clay as kaolin and succeeded in shipping five tons to England. Hubbs says he uses local clay whenever possible. 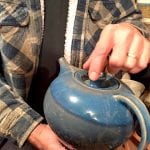 “Doug especially loves to throw bigger pieces,” said Patti. “When he went to the workshop in Italy, he really learned more about doing those larger pieces.”

Hubbs said he is glad he did not choose to try to eke out a career as a potter, explaining that the joy is in creating at will and in knowing people daily use and admire his work.

“I’m so grateful when I hear someone say, ‘I drink out of one of your mugs every day.’”

Hubbs’s annual Show & Sell for his Cave Creek Pottery is Dec. 1, from 10 a.m. to 5 p.m. at his private gallery, 131 Cross Creek Road. For more information about Hubbs’ pottery, email doupat@dnet.net.