Harvey Fouts had this to say on “syrup-making day,” at his family homeplace: “This is

living history … a window to the past.”

Fouts’s extensive family has been growing and harvesting sorghum cane and making sorghum syrup for more than 100 years.

Fall is traditionally the time of year when the sugar juice content of the tall 8-10 foot sorghum cane stalks reads 15.5 to 16.5 degrees on a Brix hydrometer or a sugar refractometer. The cane has to be cut and then a week or so later the process of syrup-making commences.

“The family tradition of making sorghum every year has been an

important part of making us a family. There were nine children in my father’s generation. Many left the area and raised their children somewhere else, and many of those children now have their own families.  Having this tradition of bringing everyone together, from near and far, creates a sense of belonging to the larger family,” said Taylor.

Sorghum syrup is a sweetener with about the same calories as honey but more calories per tablespoon than molasses, maple syrup, or white sugar. Syrup is thick, brown, and sticky, and although some people perceive sorghum is the same as molasses, it is not. Molasses is made from crushed sugar cane or sugar beets. The reason sorghum syrup became popular in Western North Carolina during the 18th and 19th centuries was because real maple syrup – and 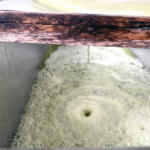 sometimes sugar – was both expensive and often difficult to acquire. Sorghum cane, however, grows well in the region. And for more than a century, the Fouts family has been growing sorghum cane on about a half-acre. For the past several years, they plant mostly Dale-variety sorghum seeds, acquired by the pound from Mississippi State University.

To make the sorghum syrup each fall, a grinding mill presses the juice out of the cane, which is fed by hand from an open trailer of cane stacked high. Juice is pumped to a holding vat before flowing to the boiler, where it heats for around four hours so water can evaporate and leave

behind the edible syrup. During the heating process impurities are “skimmed” off of the juice. The same wooden paddle, which hangs under an open metal shed at the Fouts’s family property, has been used for 100 years to push the resulting syrup into a spigot so mason jars can be filled. Approximately 15 gallons of syrup can be acquired from 100 gallons of sorghum cane juice.

“I love sorghum (syrup) …,” said Taylor. “When I was growing up, it wasn’t uncommon to have both cornbread and biscuits with our supper. We’d eat cornmeal with our main food and biscuits for dessert with syrup and butter. My father, Merritt Fouts, said there was only one way to eat syrup and butter, stir it up together and spoon it onto a hot biscuit. That combination is still as good as any dessert I’ve ever had.”

She added, “The syrup is delicious, but having it is far secondary to the sense of belonging and groundedness that joining together as a family brings. Of course, as my generation ages, it’s difficult to keep the tradition going. There’s a lot of field work before the cane is ready for the mill. The younger generation is busy building their own lives, working and raising kids, but I hope they see value in having this connection to multiple family generations and the land of their ancestors.”

While the Fouts’s farm-made sorghum syrup is distributed to extended family members and is not sold, some local produce stands and country-type stores do sell it.

“The Fouts Family Syrup Book” includes “a collection of stories, photographs, and recipes” that convey the process and tradition of sorghum syrup making. Recipes include Syrup Taffy and Ginger Crinkles.

Put butter, sugar, water, and vinegar into a saucepan and stir. Boil until very brittle when dropped into cold water. Add butter to mixture, remove from stove and pour onto buttered plate. When cool enough to handle, butter hands and pull until light brown. Pull into oblong strips and cut with scissors. Place on plate until it hardens.