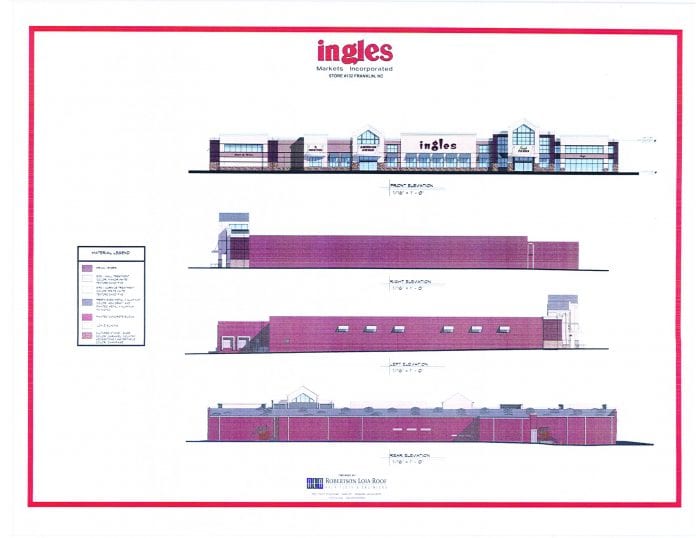 The Franklin Town Council approved the special use permit for a new Ingles to be constructed in the Holly Springs Plaza, the former site of Walmart.

Representatives with Ingles presented to the town council last week and detailed plans for four big box store spaces, two small retail spaces, and a car wash. The Ingles will also feature a gas station similar to the existing store located on the Georgia Road. According to representatives, tenants are already lined up for the available spaces. The current shopping center is 135,133 square feet and Ingles is proposing building back 179,153 square feet.

The current Unified Development Ordinance calls for 1,026 parking spaces for the square footage but at Ingles’ request and after a traffic impact study was complete, the planning board recommended that this requirement be relaxed to allow 584 parking spaces.

The Ingles that is currently open in the Holly Springs Plaza will remain open during construction, however it will be replaced once the new building is completed.

To address traffic flow, Ingles Markets hopes to get approval from the North Carolina Department of Transportation to extend the exit ramp from the Highlands Road to become a turning lane or entrance point for the shopping plaza.

Town Council member Mike Lewis asked Ingles representatives about any potential impact the store and traffic could have on ambulance response times, as the Macon County Emergency Services Base is located next to the store, and Ingles informed the board that no one from the county had attended the neighborhood compatibility meeting or were present during the town hall meeting to voice concern.

Ingles purchased the Holly Springs Plaza property in 2015 for $3.7 million and beyond confirming the purchase nearly five years ago, the chain has been tight lipped on plans for the future. Ingles opened a Super Ingles on the Georgia Road in the Fall of 2017. In addition to the 72,128 square foot shopping center, the property included 14,800 in additional space for retail shops. Since opening in 2017, those shops have remained vacant.