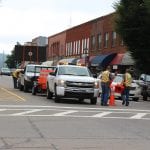 Franklin’s Town Council meeting on Monday began with Karen Duncan, of Macon County, introducing a resolution for the town’s consideration which would ask the legislature and Governor to consider legislation to prohibit those deemed an extreme threat to themselves and others from being able to purchase guns, and that guns purchased be appropriately protected.

“This is commonly referred to as ‘red flags’–some of you may have heard of that–or ‘extreme risk protection order law’. These measures may help make our communities safer,” said Duncan.

Duncan said the laws were a simple process to enforce.

“Depending on the state, family members or law enforcement can go to court and seek an order that would allow police to remove guns from an individual’s home and restrict their ability to purchase firearms,” she said. “The person seeking the order must first fill out a form providing evidence of danger to others or their self. Then the court calls an expedited hearing if the judge agrees then that the individual is a threat, his or her guns will be removed for a temporary period that lasts from a few weeks to a year.”

Since the Parkland shooting, at least two dozen states have considered enacting similar laws in their state. Duncan said in Vermont, such a law passed both chambers of its legislature.

“Recently, in Glenn County, Georgia a former law enforcement officer shot and killed his ex-wife, her boyfriend and himself. The backstory is this: in 2010, the officer was one of two policemen who stopped a car, blocked it and shot several times into its windshield, killing the driver.”

While the driver was possibly under the influence of drugs, he was unarmed, Duncan noted.

“Both officers kept their badges and were not punished,” she said. “One of the officers, presumably distraught over this incident, was later involved in two violent episodes. One involving domestic violence against his then wife, and the other involving a 9 hours standoff with a SWAT team where the officer threatened to kill himself.”

After the officer’s eventual murder-suicide, his former mother-in-law reportedly told authorities she was worried something like that would happen, Duncan said.

“This is a perfect example of a good reason to pass ‘red flag laws’,” she said.

The resolution was given to the town clerk for consideration at next month’s regular meeting.

Next up, the board had to set up a public hearing for the UDO (Unified Development Ordinance) text amendment.

“At our July meeting it was requested that we forward this text amendment back to the planning board and look at it a little further to have some options so that we’re not locked into a set footage on sidewalks,” said Land Use Administrator Justin Setser. “They have  since then amended their original text where it was simply just changing it from four foot to five foot, and have added an area within a variance.”

A provision of the amendment allows for room on sidewalks wide enough for two wheel chairs to pass according to ADA (Americans with Disabilities Act) requirements.

“We reviewed, basically, the title two rules and the public right-of-way sensibility guideline… And this was an option to put in that we could have a variance at times for geographic or right-of-way problems that we could reduce it four feet as long as there’s a passing lane, basically, or passing zone every 200 feet and we put it into the text so that it could be utilized around town on an as-needed, case-by-case basis.”

Council member Joe Collins asked, “If we go to a section of dilapidated sidewalks we want to tear them out and rebuild, we can’t stay in the same footprint if they’re four feet, rather than five?”

Setser said the Town would have to have a reason not to go with the five foot.

“It would have to be if there’s a structure we’d have to move the structure, or if there’s a bank or a wall, there has to be a significant circumstance to make it not ADA,” said Setser.

Harris pointed out that the ADA law holds that alterations and retrofitting sidewalks that we can’t get waived… “We can’t grandfather in sizes so if we do upgrade a sidewalk we do have to go with the ADA guidelines,”

“We’re sort of locked into it is what I’m hearing,” said Scott.

“I do have a couple of points that I want to try to clarify with some of the language. If the council will just let it move ahead to a hearing, you’re not locked into an adoption, still, then there’s a couple of points in the language here that I think are worth a little refining,” said town attorney John Henning Jr. “Also, I want to look at the question whether a full-on variance is actually going to be necessary, or if we have other sections of the UDO that allow the land use administrator to relax a requirement where it’s appropriate. So we might be able to add that in as a last resort short of full variance.”

A public hearing for the UDO amendment was set for Tuesday, Sept. 4 at 6:05 p.m., after Labor Day.

A letter with receipt was sent to the town by Franklin Fire Chief Rohrer, which stated the following, “On this date, Norma Widman came to the fire department [and] wanted to make a donation to the fire chief to help us out as he sees fit,” it read. “I, Chief Rohrer, walked out to her car and received $1000 in cash. It is ten, $100 bills. I immediately went inside and wrote her a receipt and thanked her. I told her we feed our volunteers monthly and this would help.”

Town Manager Summer Woodard brought forth a recommendation by the Tourism Development Authority to appoint Connie Grubermann as its new chairwoman. The term lasts for three years, and began on Aug. 6. TDA also recommended the appointment of former chair Candy Pressley as a regular voting member of the board for the same amount of time. Both appointments passed unanimously.

“As many of your are aware there are seven banners throughout town. The smaller ones in our downtown area are outliers, which are kind of your medium size. You have some large banners on 441 south.”

The town began working with Tony Angel Media to come up with proposals and concepts. It is spread out into two phases – the first was in last year’s budget and was carried over into the new fiscal year, while the second began this year. A public notice will be sent out.

“Some of these are very pretty,” said Barbara McRae. “I like the cardinal.”

No action was taken.

The board allows any employee who gains more than 240 hours during a FY to carry it over to end of that year. The software at the time only allowed a manual correction at year’s end. The new software allows them to do it by the employee’s anniversary date so at no time would they be carrying their hours over to the end of the fiscal year.

Vacation time is earned during the pay period after a worker’s anniversary. A maximum of 240 hours of this time is allowed to accumulate, with any extra time being transferred into their sick leave time until the end of the fiscal year. After one year of aggregated service, a town employee can earn five days—worth 40 hours—of vacation time. After two years, that’s six days—or 48 hours—and so on. After 25 years or more, an employee of the Town of Franklin earns 30 days of vacation time, or 240 hours.

“It does appear that our system will allow it to be on an employee’s anniversary date,” Woodard said.

Who asked for amendment so it goes from annual allotment to one based on their anniversary date. The difference would be instead of eligible workers carrying extra overage hours until end of June, with new system, the Town of Franklin accounts payable allowed the transfer of 240 hours of vacation and sick leave time into the anniversary date.