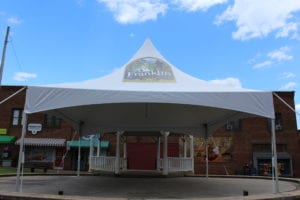 Town Planner Justin Setser has been proactive in leading the charge in beautification and functional improvements of Franklin since he was hired with the town. From his proactive approach to leading the town to adopting the BikeWalk plan that maps out the town’s future in improving bicycle and pedestrian travel around town, to the small details of installing dog waste stations, Setser and the town of Franklin have been working to make downtown Franklin better for visitors and residents alike.

Earlier this month, the town of Franklin installed the first pet waste station in front of town hall and at the memorial park in Franklin. The waste stations include materials for pet owners to clean up after their pet.

“There is one at Town hall and two at Memorial Park,” said Setser. “I have one more to install at the gazebo at the square. I plan to have it installed by the end of the week. We see a major issue of people walking their dogs at these locations but not cleaning up after them. Since these locations are high traffic areas we at the town thought these stations would help keep our town cleaner and a little more enjoyable. I just hope that pet owners will be responsible and clean up after their pets now that these stations have been installed. I really worry about it at Memorial Park because of all the kids that play at the park. It is a bigger issue at the park.”

Setser presented a plan to Franklin Council members last week to place bike racks downtown. According to Setser, the bike racks are part of the town’s BikeWalk plan and Franklin’s commitment to make downtown more user friendly for bicyclists.

The master BikeWalk plan identifies 22 projects throughout the town ranging in cost from a 225-foot bridge being placed on Wells Grove Road crossing over the Little Tennessee River at a cost of $8,000, to an estimated $4 million project to construct a 3.7 mile Southwest Loop multi-use path for both bicyclists and pedestrians around Franklin. While several of the projects are big ticket items, smaller items such as the bike racks are ways the town can continue moving forward to make a difference today.

According to the BikeWalk plan, one of the necessary supports for bicycle transportation is bike parking. Setser proposed placing the racks by town hall and in front of the gazebo on the square, both high traffic, high visibility areas in town.

Setser recommends bicycle racks that can accommodate up to 10 bicycles and are placed in the ground with deep stakes. The structures will be semi-permanent so as the need or demand changes, the two proposed racks can be moved to best accommodate the community.

“I have already purchased two, 10 person racks and have installed the first one at Town Hall in the lower parking lot,” said Setser. “For Franklin to become a more bike-friendly community, these type of facilities need to be offered. I plan to have the other rack installed at the square by this weekend. I would really like to urge businesses to look at installing bike parking facilities at their locations to help promote more biking around town. Bicycle racks are not very expensive and very easy to install. If any business, church or school have questions about bike racks they can call me at town hall anytime.”

Setser makes it a priority to keep the public informed about projects around town through the Town of Franklin’s Planning Department Facebook page. The public page is the only Facebook page operated by the town and serves as a resource to the community about projects and renovations in and around Franklin.