The Town of Franklin Council meeting on Sept. 6 kicked off with Mayor Jack 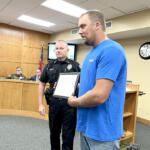 Highway 23 bypass in Franklin. … She went airborne between two bridges and landed on U.S. Highway 64 (Highlands Road) underneath the bridges. Maner’s vehicle then caught fire, at which time Alan Cochran with the North Carolina Department of Transportation, and Jeremy Reed of Clayton, Ga., pulled Maner from the fiery vehicle.”

Cochran and Reed were also presented a FPD challenge coin for their heroic efforts that day. The accident victim was present at the meeting and tearfully thanked both recipients for their “bravery.”

Two proclamations included Constitution Week and Day of Service and Remembrance for 9/11. Mayor Horton read the Constitution Proclamation in the presence of Mary Victoria W. Baker, Regent, National Society Daughters of the American Revolution (NSDAR), Battle of Sugartown Chapter. The proclamation states, “September 19 2022 marks the two hundred thirty-fifth (235) anniversary of the drafting of the Constitution of the United States of America by the Constitutional Convention,” and that “… all citizens are encouraged to reaffirm the ideals the Framers of the Constitution had in 1787 by vigilantly protecting the freedoms guaranteed to us through this guardian of our liberties, remembering that lost rights may never be regained …”

The other proclamation, which was not an agenda item, was presented by Mayor Horton in the presence of Chief of Police Bill Harrell and Fire Chief Ben Ormond. Sunday, Sept. 11, has been declared a day of service and remembrance in honor of those lost during the events of Tuesday, Sept. 11, 2001.

The council heard two presentations, one by Marianne Martinez, executive director of Vecinos and Russ Harris, executive director, Southwestern Commission. Martinez delivered a summary of Vecinos, a nonprofit organization focusing on medical care on behalf of Macon County low income residents, most of whom are farm workers. Harris delivered an Affordable Housing Report which included area growth statistics, population demographics, and a study based on 2020-2025 projected housing needs.

The Consent Agenda was approved and the public speakers session included Dave Linn, who thanked the Council for their support of ’80s Flashback Weekend, which raised $20,000 for Shriners and will benefit 115 children. Also speaking was Beverly Butcher, who presented climate change concerns.

In new business, a request from the Franklin Tourism Development Authority for a budget increase was approved. Also, two Franklin residents, who reside on the dead-end section of Riverview Heights Street, requested a speed limit reduction from 25 to 15 miles per hour for their street, which includes six homes and where speeding has been an issue. Franklin Town Attorney John Henning recommended the council issue an official ordinance directing the speed limit reduction if approved. Additionally, Mayor Horton offered for the Council to consider alternate steps in the event a speed limit reduction does not adequately address residents’ concerns.

Three street closure requests were approved; they include: Nikwasi Lane for Trail of Tears National Conference, Sept. 20; Iotla Street for a concert at the Gazebo, Oct. 8; and a portion of Carolina Mountain Drive for a Sk828 fundraiser at Altered Frequencies on Oct. 29.

In a closed session, the council discussed a parcel of land that is adjacent to an existing town-owned property that has become available and would allow for improved sewer line access. The council discussed the necessity to access utilities and potential for future greenway connectivity with this purchase. Council Member Stacy Guffey made a motion, seconded by Council Member David Culpepper, to approve purchase of a parcel of land, approximately 14 acres, from Mainspring Conservation Trust for a price of $22,000. This purchase will provide access to Franklin sewer lines and authorize Town Manager Amie Owens to execute the contract contingent upon the approval by the Mainspring Conservation Trust’s board. The motion was approved.

The next Town Council meeting is scheduled for Monday, October 3.

The Never Forget 5K and Lil’ Engine That Could Fun Run/Walk will be Saturday, Sept. 10. Build a Scarecrow at the Gazebo, sponsored by the Streets of Franklin Heritage Association, will be held Sunday, Sept. 11.