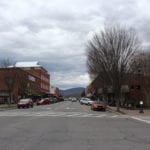 From speeding to parking to crosswalks, the Franklin town board has made the downtown area a priority and after a presentation from Joel Setzer last week, the board is poised to make decisions regarding changing the way Main Street looks.

Last week, Joel Setzer with Vaughn and Melton Engineering presented members of the town board with the results of a streetscape evaluation that could address potential needs and improvement projects for the downtown area.

“The idea for the streetscape proposal came from the town board’s retreat in January and October 2016,” said Town Manager Summer Woodard. “Members of the Town board wanted to look at various downtown parking alternatives. Therefore, town administration reached out to various engineering firms to receive ‘streetscape’ proposals. The next step will be for the board to decide if they would like to pursue any of the proposals or not.”

Setzer informed the board that Franklin’s Main Street’s biggest problem is the limited real estate for change. From hard angle parking spaces, to trucks jutting out into the driving lanes, the design of the road limits what changes can be made. While figuring in the limited real estate, Setzer worked with his firm’s engineers to consider changes to Main Street that would address changing drivers’ behaviors such as speeding and the need to respect bicyclists and pedestrians along the road.

According to Setzer, one of the focuses his firm found to be needed was a change in attitudes which would provide equal access to those with disabilities around Franklin’s sidewalks and roads, while providing better access for bike and pedestrians, something the town has already been working toward.

Setzer pointed out that the town has funded and conducted extensive studies in recent years, such as the 2008 Franklin Main Street Program Master Plan, which made recommendations that were never followed through with. A Franklin Parking analysis was also conducted and despite a suggestion to look at parallel parking to increase the amount of parking on Main Street, that study’s recommendations were also never implemented.

Setzer suggested the possibility of considering angled parking on both sides of the street, but looking at one lane going up the center of Main Street, rather than two, which sometimes is difficult to maneuver based on the size of vehicles parked in spaces lining Main Street. With only one lane of traffic, Setzer suggested there may be room to add a bike lane.

At the end of last week’s meeting, moving forward with Setzer’s recommendations, Mayor Bob Scott  said that he had been in discussions with representatives from the North Carolina Department of Transportation about doing “trial runs” on some new traffic and parking ideas in town.

“There are some ways that we could practice for a week or 10 days some of these ideas that have come up. Such as, the one lane on Main Street, some parallel parking and some diagonal parking. We might be able to practice that working with our Police Department and the DOT folks, to make some practice runs to see what might work and what might not work.”

Scott says that the trial runs would take some work to put in place, but the DOT is not opposed to the idea.

“We might have to put in some temporary lines, with something like lime or chalk, but we would have to monitor it. On the one lane down Main Street, we can do that with cones, like when we have festivals and things like that. They (DOT) says it’s a novel idea, and they’re perfectly willing to work with us just to practice this. It also gives people a feeling of what we’re talking about, because they can actually experience it.”

Town Attorney John Henning Jr., raised some concerns, including the cost. Another concern that was voiced was about giving the public enough notice and ability to have input on the proposed trial runs.

Scott informed the board that he would collect additional information and keep the board and the public informed of any trial runs that may be attempted in the near future.