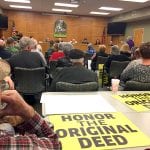 A standing-room-only crowd filled the Franklin Town Hall council room Monday night for a public hearing on one of the most controversial agenda items in recent memory: A proposal to deed the 1,000-year-old Nikwasi Mound in East Franklin to the nonprofit Nikwasi Initiative, which is affiliated with the Eastern Band of the Cherokee Indians (EBCI).

A March 4 proposal by Vice-Mayor Barbara McRae, who also acts as co-chair of the community development organization at the center of the debate, called for the town to add the Initiative to the deed of the 0.7-acre property as a form of reparations and partnership in economic development.

McRae argued that the move was a symbolic gesture to the Cherokee 200 years after their local territory was lost in an 1819 treaty. She also said the move was a symbol of partnership in the economic development and greening of East Franklin by four equal partners: the Town of Franklin, Macon County, the tribe and the nonprofit land trust, Mainspring Conservation Trust, whose office is just 300 feet from the mound.

The proposal set off a firestorm from some long-time Maconians, who recall the story of local schoolchildren donating their pennies to buy the mound for $1,500 in 1946, which saved it from destruction. At the time, the mound was deeded to the town for preservation and posterity. On March 27, a group of five Maconians filed a preliminary injunction in District Court to block the deeding, triggering the town to also brace for legal defense.

Nineteen community members signed up Monday night to address the six council members and Mayor Bob Scott, who has publicly denounced the proposed conveyance. Former Historical Society president and seventh-generation Maconian Gloria Owenby, one of the plaintiffs, was the first to address the council.

Speaking directly to McRae, who faced the anger of nearly all those in the opposition camp, Owenby quoted McRae’s own 1993 history book on the ancient mound, which celebrated the public’s role in its preservation.

“I found it interesting and disturbing that Vice Mayor Barbara McRae is now proposing to give the Nikwasi Mound away,” she said. “The Nikwasi Mound belongs to all citizens.”

Betsey Gooder, publisher of The Macon County News, read directly from the deed generated in 1946, which said, in part, that “The mound … shall be preserved for the citizens of Macon County … and the same shall be kept as it now stands and shall not be … used for any commercial purpose .. the Town is herby authorized and empowered to exercise such control over the same. … Any deed, lease or other contract which in any way may interfere with the objects and purposes of this instrument as above set foth shall be null and void, and should the Town of Franklin at any time fail to carry out the provisions of this instrument, then any citizen of Macon County shall have the right to apply to the court for injuncitve relief and to prosecute said action in their own behalf and in behalf of all other citzens of Macon County.”

Another plaintiff, Betty Cloer Wallace – who paid the $150 in court filing fees for the preliminary injunction, which was filed without a lawyer – raised the perception of conflict of interest.

“You, Barbara, should recuse yourself from any such vote about the mound – both your giving it away and handing it to yourself in any manner that adversely affects the people of our town and county,” she said.

Town lawyer John Henning Jr. later clarified publicly, at the request of McRae, that the vice mayor’s position on the Nikwasi board is not a “legal conflict of interest,” because she has no ownership interest or financial benefit. As a result, she cannot recuse herself from voting on the matter by North Carolina state law.

Community member Jean Welch expressed a variety of fears in her comments.

“I see a profit motive, I see commercialization of the mound, I see a hastily put together foundation,” she said of the 2016 chartered Nikwasi Initiative. “I don’t think this area needs more development, more casinos, more traffic, more pollution. There are things that are more important in life than profit and economic expansion.”

Speaking as private citizens, members of community organizations including the Macon County Folk Heritage Association, Cowee School Arts and Heritage Center and Western Carolina University expressed their support for the conveyance of the property.

“That mound does not look pretty today when you drive by it,” said Lazy Hiker investor Chris Broward. Broward called the industrial development around the mound “an ugly blight” that could be beautified with the investment in surrounding properties promised by Nikwasi Initiative partners.

Outdoor 76 owner Cory McCall took to the podium to implore council members to consider how the Franklin town entrance from 441 could be made into green space and the formerly vacant Dan’s Auto Parts building could be a future museum, as the EBCI plans since purchasing the property for $400,000 in 2017.

“Is it a possessive thing that we have to keep it?” he asked council members. “Or, is it an opportunity for us to open our hand and to lead by being able to extend our hand.”

Applause erupted when arguments in favor were presented succinctly, leading Mayor Scott to call for no applause and request silence from the public. Scott also awarded 35 additional seconds to the pro-side when an opposition speaker spoke past the allotted 3 minutes allowed per speaker.

The only EBCI member to speak, Nikwasi Initiative co-chair Juanita Wilson, addressed the council first in Cherokee, offering a greeting to all in attendance and speaking her Cherokee name, Waya-nita (meaning “pack of baby wolves”) Wilisini, before making her case in English.

“My ancestors didn’t believe in owning land,” she said, acknowledging the role of Macon County children in saving the mound. “We’re looking to save it again …We want to share it with you, we want to move forward with you into the future and we want to heal. We want to be one.”

The Town Council moved to closed session for attorney consultation after hearing 59 minutes of public comment, during which time some members of the public left and others of the pro and con sides confronted each other to make their case.

“To me, y’all need to start at home: clean out your own closet before you come over here and start trying to clean out ours,” she said. “And y’all can do all of this stuff without the deed.”

Wilson responded that that was a question for the Town Council.

“We didn’t request it, but we think that would be the best move because we could get money and we could get partnerships,” Wilson explained.

Upon returning from closed session, town lawyer John Henning Jr. explained he saw no limitations in the language of the 1946 deed to restrict adding the Nikwasi Initiative as owners beholden to the same guarantees and an additional 10 pages of new guarantees, prepared by Mainspring.

“There are a boatload of other restrictions,” he said, explaining that should the Initiative cease to exist or violate its obligations, there is a reversion clause to the town.

Mayor Scott underscored that the document is public. To which Henning Jr. responded: “I’m all for it. Listen, I think you should hire a helicopter and drop it over the whole town.”

Council member David Culpepper called for legal language to guarantee the promises of the partners “so that the bad things that people are afraid of happening, can’t happen.”

Culpepper also acknowledged that the properties surrounding a newly-celebrated Nikwasi Mound would be commercialized. In deeding the mound itself, he saw it as an educational opportunity whereby Maconians and visitors can learn about the mound’s 1,000-year-old construction, Cherokee history, and how the town saved it.

“Let’s tell the real history of Nikwasi and allow people to learn,” he said.

Up or down vote in May

Despite Mayor Scott’s desire for a six-month “cooling off period,” the town voted unanimously to schedule an up or down vote in May on passing the draft deed and preservation agreement.

The agreement, which is a public document scheduled to post on the Town’s website by Wednesday, will be considered for one month before the vote. The public will have one more chance to express their support or opposition in the public hearing period on May 6.

Barbara McRae, for her part, was visibly shaken when asked about the personal attacks from community members she said she knew.

“I got the heat,” she admitted. “I’m very satisfied. It was more civil than I expected.”

The vice mayor was also confident that the initiative will pass in May, expressing her belief that the public debate and hearing served to educate more people about the mound.

“It will give us the time to look over the deed and make sure that everything is right,” she said of the month ahead. Then, she added, with a laugh, “Hopefully it will be a cooling down period, and not a time for people to muster more lies.”