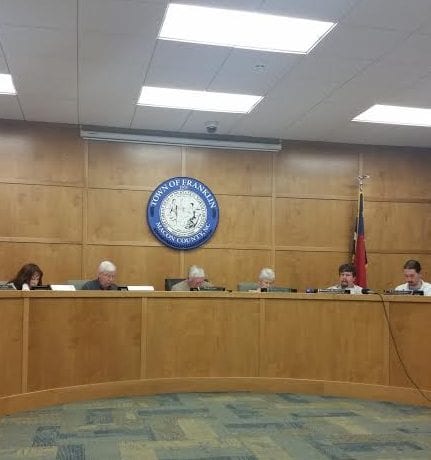 The Franklin Board of Aldermen were given their first chance to view Franklin Town Manager Summer Woodard’s budget on Monday night and will have the next few weeks to review it before the first scheduled budget work session.

Woodard’s recommendation includes leaving the current ad-valorem tax rate of 28 cents per $100 for fiscal year 2016-17, but to prepare for slow growth in water and sewer revenues and continued involvement of the General Assembly in local government affairs that account for at least a $30,000 loss in revenue for Franklin in the coming year. Woodard noted that the town’s fund balance is key to long term financial success.

“The Town of Franklin continues to operate in sound financial condition with a stable fund balance,” Woodard wrote in her budget message. “This budget addressed the continued need for long term financial and infrastructure planning for the town of Franklin.”

Woodard’s message calls for a one percent, one-time payment based on salary in lieu of cost of living adjustment for all positions in December. The town’s health insurance, dental and workers compensation premiums as well as employee benefits are all expected to remain the same.

The town will continue working on phase one of the Water Plant Upgrade and Expansion project with bid submittal, approval and construction expected to occur in the proposed budget year.

Woodard proposed $161,445 be spent to upgrade the town’s current software system, which is 17 years old. The upgrade would allow the town to accept online transactions as well as credit/debit card payments. Woodard also proposed the town purchase a new lawnmower as the current mower is 10 years old and was refurbished at the time of purchase. Replacing the town’s firewall, which is five years old as well as purchasing a generator for the Franklin Police Department were also proposed.

The proposed budget includes funds to repair the Fox Ridge Culvert and Street, which is severely deteriorated.

The town’s non-profit funding pool for community organization is proposed to remain at $40,000 and the town’s Economic Development fund will also be left at the current amount of $7,000.

The proposed budget includes funding for cleanup and removal of debris at the Whitmire Property that were a result of a controlled live burn demonstration completed by Franklin Fire and Rescue.

Fire Department: The current fire tax rate of $.0445 cents per $100 of valuation is proposed for the coming year. $190,143 from the fire department’s fund balance is proposed for new hydraulic equipment to replace the current equipment which is more than 10 years old.

Water and Sewer: The proposed budget includes funding to complete the Forest Avenue water and sewer line repair. Funds are also included to replace a generator at the Industrial Park pump station, which is no longer in operation. With cleaning on the drainage basin slated to occur in 2018-19 and expected to cost $150,000, the budget proposal includes setting aside $30,000 in the coming year to save for that project. The proposed budget also includes a recommendation for the town to hire a full-time utility maintenance mechanic as well as a full time engineering position.

The proposed budget includes a four percent increase to the town’s water and sewer rates, which would only affect base and volume charges and not tap, connection and other miscellaneous charges. The increase is proposed in order to maintain the existing infrastructure and plan for the upgrade and expansion of the water and sewer plant.

A budget work session is scheduled for Monday, May 16, at 7 p.m. and the board is scheduled to hear from the public on Monday June 6, which is likely the date the board will also vote on whether or not to adopt the proposed budget.