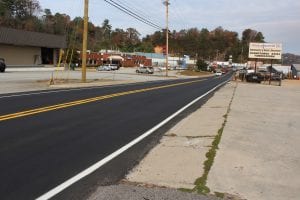 The town of Franklin Board of Aldermen tackled several items on Monday night, all geared toward improving services to the residents of the town.

Following up on conversations from a board retreat held in October, Franklin aldermen voted unanimously to work with the North Carolina Department of Transportation to change the traffic light pattern downtown. As it stands, after 11 p.m. the lights in the middle of Main Street go from traditional red/green lights to a blinking yellow/red light.

Franklin Police Chief David Adams spoke to the board on Monday night and said he supported the changes of the traffic light pattern because his department has responded to several accidents at the intersection during late night hours.

Mayor Bob Scott noted that he believes the light was changed to a blinking light from 11 p.m. to 5 a.m. many years ago because the sentiment then was that little goes on in Franklin after 11 p.m. The board agreed that while that may have been the case when the decision was made, now, Franklin has a more active nightlife and a regular traffic light would make that intersection more safe.

The board voted to approve the change, which Franklin Town Manager Summer Woodard will forward to the DOT as a requested change.

Another item that was first discussed at the retreat, the possibility of making Bidwell Street a two-way street all the way through, was also addressed Monday night. Currently, Bidwell Street is a two-way Street from the beginning when turning off of Main Street until the first stop sign, which is an intersection with Lyle Street. From that intersection until the next stop sign at Harrison Avenue, the street is a one-way street.

“I believe when the change was made to make that street a one-way street, it was done as a request from the resident who lived there at that time,” said Woodard. “I believe the intent was to slow down traffic along that street.”

Bidwell was changed to a one-way street from the Lyle intersection to Harrison Avenue via an ordinance passed in 1993. The street change became effective on Dec. 1, 1993.

Chief Adams supports the idea of changing the street to a two-way street and doesn’t believe that speeding would be an issue. The Franklin Board of Aldermen voted to send the request to change the traffic pattern on Bidwell to the town’s planning board for further consideration.

When the North Carolina Department of Transportation released its list of prioritized projects earlier this year, the town of Franklin learned that the NCDOT has preliminarily approved a major sidewalk repair project along Depot Street.

The town of Franklin submitted the bicycle/pedestrian project via the Southwestern RPO (Regional Planning OOO) for scoring and ranking in the NCDOT’s strategic prioritization process, which was developed in accordance with the Strategic Transportation Investments law. The NCDOT approved the town’s project and priced the sidewalk renovation at $262,800. As part of the state’s requirements, the town of Franklin would be responsible for a 20 percent local match for the project to be completed.

On Monday night, town aldermen unanimously voted to send a letter of intent to the NCDOT agreeing to the 20 percent match, would come at a cost of $52,560. The funds aren’t needed right away, as the timeline for the project can be anywhere from two to 10 years from now.

“This project falls in line with the town’s bicycle and pedestrian plan to make the downtown area more user friendly,” said Woodard. “The current administration, as well as previous boards, have worked to get the sidewalks along Depot Street fixed, as right now they are kind of just pieced together. This will be a great step in the right direction.”

The proposed sidewalk project will address the gaps in the sidewalk on the west side of existing sidewalk and will construct new sidewalks on the east side portion of the road. The sidewalks will be addressed from the beginning of Depot Street near Dominos all the way to The Franklin Press office on both sides of the road.

After bids submitted from companies vying for the water treatment plant upgrade and expansion project came in over proposed budget, the town board rejected three submitted bids on Monday night and voted to restart the process.

“Our engineers with McGill and Associates proposed the upgrade project to cost about $2.5 million,” said Woodard. “The lowest bid received came in at $2.8 million. We rejected the bids and are going to take another look at the project and see what we can change to lower the cost and get that project within budget.”

Woodard noted that even with the bid rejections, the project is still on schedule to begin construction by March 2017.

Intending to create a product that is more user friendly and effective, the town of Franklin launched its new website on Monday. The updated website is not only easier to use, but offers residents and visitors much more information about Franklin, starting a business, activities in the area, and more.

“We really just wanted the website to be an easy resource for our residents to stay connected with the town,” said Woodard. “From the additional information about various town departments, to a step toward online bill pay for water and sewer bills, we hope residents find the new website easy to use and informative.”

The new website was contracted out with Tony Angel Media who created a site to highlight Franklin’s natural resources as well as serve as a resource for people considering relocating to the town or just planning a visit. The interactive site has features to help residents set up new water and sewer accounts and to steer prospective new business owners in the right direction on how to start a business venture in Franklin.

By July 2017, the new website’s most anticipated feature, online bill pay, will be live and available to the public.

Woodard noted that the town is waiting on the new software that will allow town residents to pay their water bill in a convenient and secure way online, right through the town’s website.

AMC will no longer deliver babies in Franklin

Franklin man sentenced to five years for part in 2016 fires

Five things to help you best prepare for the Solar Eclipse