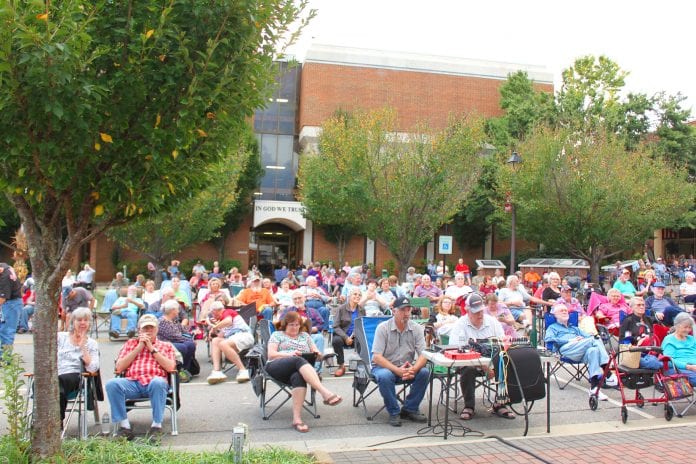 Town of Franklin officials closed the Gazebo on the square for public use last year as COVID19 surged across North Carolina. Monday night, the board was slated to discuss reopening the Gazebo, but that discussion will be continued at next month’s meeting with nothing being decided at this point.

“Both are up for more thought,” Franklin Mayor Bob Scott said Tuesday morning when asked about reopening the Gazebo and resume the town- sponsored Pickin’ on the Square event. “It appears the pandemic is getting less severe.”

While the town has not officially reopened the Gazebo for public events, a special approval was issued to celebrate the life of the late Vice Mayor Barbara McRae.

“We plan to have the gazebo reopen very soon,” said Scott. “It will be open Saturday, April 17, for a Celebration of life for Vice Mayor Barbara McRae put on by her friends and the Women’s History Trail.”

Scott said after that event, the town will consider future events on a case by case basis.

Pickin’ on the Square, the annual town-sponsored summer concert series has not been officially relaunched yet, and Scott said moving forward, that will all depend on time.

“No decision has been made about Pickin’ at this time,” said  Scott. “It is still open for discussion. All of this depends on Covid restrictions.”

Pickin’ on the Square happens on Saturday evenings and traditionally begins in late May and continues through mid-October. The event features a wide range of music, all free to the public. With mass gathering limits and COVID19 safety precautions still in effect for North Carolina, the town has been unable to host the event.

At Monday’s town council meeting, the board discussed how to proceed with the seat left vacant by the passing of McRae. The Council voted unanimously to name Jack Horton to serve as vice mayor.

The next steps on filling the vacant seat are unclear due to pending legislation.

“We do not have to fill the seat as it is not a remaining full term,” said Scott. “It is less than six months till filing. Also, we do not know if we will have an election in 2021 or it will be in 2022.The NC Board of Elections is debating about moving municipal elections to even numbered years.”

The North Carolina State Board of Elections (BOE) has asked the North Carolina legislature to move the municipal election of 2021 to 2022 and move the 2022 elections back two months. This is because the U.S. Census Bureau said it was five months behind schedule in releasing data that helps states construct their districts lines for this year. The district lines for the North Carolina federal and state election are redrawn every 10 years after the census, but the BOE worries that not moving it back would cause confusion and added expense.

While the town of Franklin would not be impacted by redrawn district lines because seats are elected at-large and not by districts, other municipalities in the state are. Around 45 municipalities that have district elections in 2021 have the ability to change their own election dates. Lawmakers would have to pass legislation changing the election dates for the remaining municipalities. Rather than just address the impacts municipalities, the state is calling for all elections to be delayed.

“I am totally against this,” said Scott. “I do not want to see our elections partisan, having primaries and being overshadowed by state and federal elections.  We are doing just fine being non-partisan.”