Mayor Jack Horton expressed his appreciation for the dedication of the Franklin police force and reiterated again the need for more qualified individuals to apply to the police force. 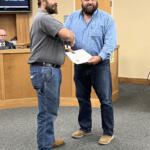 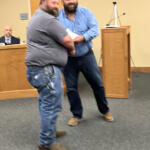 Women’s History Trail project leaders Marty Greeble and Mary Polanski introduced and presented the history behind “Sowing the Seeds of the Future,” an ongoing historical public art project involving a sculpture that is in its final stages. The seven-foot sculpture by internationally renowned sculptor Wesley Wofford (of Cashiers) includes three female figures representing actual historical figures significant to Macon County. The sculpture will be a gift in 2023 to the Town of Franklin from the Folk Heritage Association of Macon County.

Polanski explained that the sculpture, which was the brainchild of the late Barbara McRae, former vice mayor of Franklin, will eventually be installed near the two bridges at the entrance of Main Street. “We want to develop education opportunities involving the sculpture so area residents and students can learn about the resiliency, hardships, steadfastness that the women in the sculpture represent.”

Greeble explained to the Council that the sculpture has been paid for with “generous donations” from mostly local individuals and businesses, and monies are currently being raised to pay for the sculpture’s installation. However, she noted that the sculpture will be offered as a gift to the Town of Franklin and the people of Macon County and will serve as the “trail head” of the Women’s History Trail.

“Around this time next year, we hope to have the sculpture installed,” said Greeble, “and then we will have a celebration before the end of 2023.”

Mayor Horton explained that the town attorney, John Henning, is delving into the details of a memorandum regarding the sculpture that includes responsibilities in terms of its upkeep, etc., and the Council will discuss the gift at the September meeting.

“Hats off to all who have been involved in this project,” said Horton. “It’s been a tremendous effort.”

“It will be wonderful to have this [sculpture] in our town,” said Council Member Rita Salain.

“This is such an important milestone for Franklin,” said Council Member Stacy Guffey. “It’s been at least 100 years since there has been a sculpture installed in our town. And this sculpture will represent three cultures that have lived in these mountains together for 300 years.”

Sundry other new and old business items were discussed, including the Franklin Police Department’s employee salaries. The Town Council accepted numerous recommendations and approved town manager Amie Owens to move forward with a salary survey for all departments. Recommendations, according to Owens, include:

– Adjusting the current salary structure within the Franklin Police Department to be competitive within the region – including the change to the starting salary for a police officer to $40,500, as well as adjustments to the existing pay scale within the police department;

– That individuals who are chosen to be sponsored by the Town of Franklin be hired as full-time, non-sworn employees during their time in Basic Law Enforcement Training (BLET); the Trainee salary rate would be $38,475, which has become the practice within the region rather than paying a limited hourly, part-time rate. Upon successful completion of BLET and gaining their sworn officer status, an officer’s salary would be adjusted to the base rate of $40,500;

– Continue to actively recruit officers who may have some experience for the remaining open positions, utilizing the adjusted pay scale to fill vacancies “sooner, rather than later.”

Meetings and agendas for the Town of Franklin are always available at www.franklinnc.com/town-council-agenda-minutes.html; and, meetings are always open to the public, unless a “closed session” is announced. The next Town of Franklin Council meeting is Tuesday, Sept. 6, at 6 p.m. Town offices will be closed Monday, Sept. 5, in observance of Labor Day.