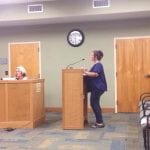 Franklin Fire and Rescue planning for the next 10 years with...

Macon school employee arrested for sexual exploitation of a minor