Home News Community Toy museum in the works for Franklin 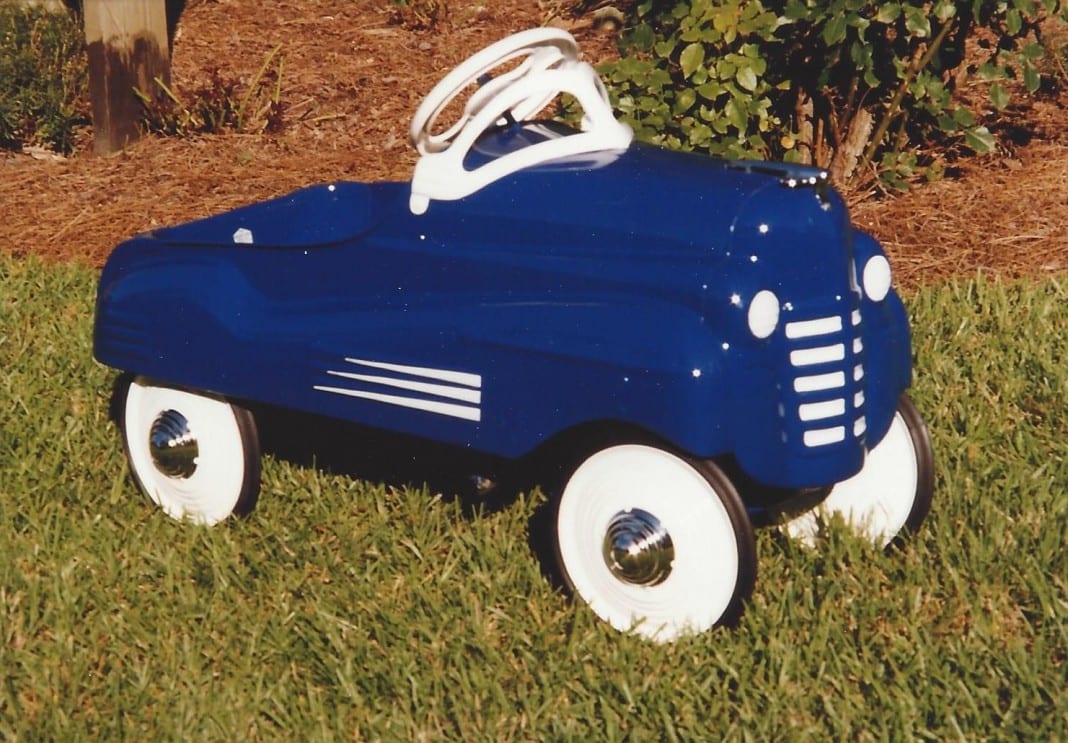 Jim and Sandy Geary moved to Franklin several years ago, bringing with them a lifetime collection of toys numbering between 1,200 and 1,500 pieces. Jim has been collecting toys and model cars, trucks and pedal cars for more than 60 years. His passion for collecting began with the purchase of his first model car kit, a Revel l 1911 Rolls Royce, when he was 12 years old. Sandy has collected construction equipment, cranes, bulldozers, and motor graders from small to pressed steel for about 35 years.
The couple have enjoyed having this massive collection stored in home displays where they have been able to share them with friends and family. Now Jim wants to fulfill a dream that he has been carrying for several decades — to have a free-standing building in which to open a toy museum. The proposed plan for the museum, appropriately named Down Memory Lane Toy Museum, is to have not only their collection of old toys, but also donations from other collectors and shared exhibits from other toy museums. The museum would also have a consignment area and a gift shop for old toys and a children’s play area where children can have some hands-on experience with some sturdy old toys. In addition, a local lady is interested in doing children’s activities in the establishment.
Donations to complement the museum have already been offered from local and out of state sources. A 6’ x 10’ HO gauge model railroad layout has already been donated by someone in Hayesville. Two large doll collections are also possible additions for the museum (One is a large collection here in Franklin.) A Spartanburg, S.C., couple, who the Gearys have known for more than 30 years, has indicated an interest in displaying their collection. The Spenser Doll and Toy Museum in Spenser, N.C., has expressed a desire to partner with them in sharing exhibits. Possible donations may come from Pennsylvania and even European toy trains from the Netherlands.
When he first began collecting, Jim’s focus was primarily on toy vehicles made before World War II, but as his collection grew, his collection took on a much greater diversity. Since he was a young boy when he received a Lionel 027 gauge electric train set, to the wooden tractor his father made for him, to the 1911 Rolls Royce he built from a kit at age 11, his passion for collecting toys grew into a lifetime passion that even survived a 20-year-career in the United Stated Air Force from 1958 to 1978. Even though he moved around and did overseas tours in Guam, the Philippines, and Vietnam as an airplane engine mechanic, his enthusiasm for collecting toy vehicles never wavered and his assortment of toys did not diminish.
Then, in 1969, his focus on toy collecting took a sudden turn when he bought a 1964 Studebaker GT Super Hawk (Grand Tourismo). He was not aware at the time of purchase that his newly acquired Super Hawk was one of only 51 manufactured in 1964. He joined the Studebaker Drivers Club and was also awakened to the world of collectible Studebaker toys cars and vehicles. His newly developed interest in Studebaker collectible toy vehicles eventually resulted in a collection that numbered around 750 vehicles, although, at present, that number has been pared down to the range of 500 or 600.

His collection of Studebaker collectibles includes not only toy cars, but also models of military vehicles such as army trucks, and jeeps. The toy cars range in size from one that can sit on a penny, through all the normal size children’s toys up to the Larkette, a child-sized replica of the popular 1960’s Studebaker Lark. The Gearys have two of the Larkettes, which they have ridden in parades and shows.
As the search for Studebaker toys became increasingly difficult, Jim decided to write a book to help collectors find the rare toys. In 1990, he published a book titled “Studebaker Toys and Models: A Pictorial Overview.” The volume contained descriptions and black and white pictures of more than 600 Studebaker pieces. The book was so well received that, in 2004, he published an updated version, containing color pictures of the artifacts.
Over the years, Jim has not only collected, but restored and built toys. He has restorations on display in various museums, including the National Toy Museum. Currently, he has two articles on display at the Macon County Historical Museum. The wooden wheelbarrow in the front display window was a replica that he built. The other is a 1910 Junior Farm Wagon built by Studebaker, displayed on the inside of the Museum. This 1910 version was built to be pulled by either a goat or a large dog.
One of his most fascinating projects was a toy replica of the Dutch Zeylwagen. This model was much like Granny’s recipes, in that it was not built from a kit, but from scratch. The Zeylwagens were wind-powered vehicles designed to run on the sands and beaches of the Netherlands. They had sails and were steered by a rudder. On the full sized version of his zeylwagen, the axels were as high as a man’s head, so the wheels had to be roughly ten feet in diameter. Modern day versions of this vehicle can be seen on Facebook videos. They resemble modern, sleek sailboats on wheels racing across the beaches of the Netherlands.
Jim has a dream. He has hundreds of collectible toys. He has display shelving and display cabinets. He has the Historical Society Museum partnering with him, taking him on as an extension of the museum. The only thing he doesn’t have at present is a building to house the collection. Hopefully, this will soon follow. As Jim has said,” Sharing with others is the best part of collecting.”
Find the Gearys on Facebook at facebook.com/downmemorylanetoymuseum