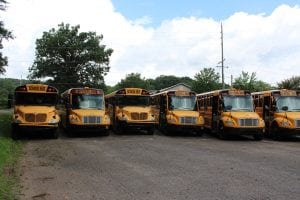 Macon County Schools new transportation director Todd Gibbs, who assumed the position July 1, informed members of the board of education that the system isn’t just for safety, but will also allow the district’s bus system to operate more efficiently, saving dollars in the school system’s transportation budget.

Macon County Schools consultant Terry Bell has been working for months to evaluate different companies who provide the service to ensure that Macon County Schools gets the best bang for their buck. During the June meeting, Bell presented board members with a contract with Synovia, which uses Verizon Wireless to operate the system.

The total cost of the contract is $2,052 plus tax with a base payment of $36 per yellow bus per month. Funding to pay for the tracking system will come from funds from the North Carolina Department of Transportation. Bell assured the board that the district has funds for the system within the existing transportation budget and additional dollars won’t be needed to outfit all buses by the start of next school year.

The software includes core track and trace, comparative analysis, time and attendance and engine diagnostics. The GPS tracking system will allow Macon County school officials to know the speed a bus is traveling at any given time during a route, when a bus stops and starts, and when the stop arm of the bus goes in or out.

In addition, if there is a problem with a bus such as overheating, with the diagnostic report generated from the program, a signal will be sent to the garage and an email will be created saying a bus is having a problem. The problem will be detected immediately, rather than after it is too late. The tracking program will also help with parent communication; for example, if a parent calls about a student on a bus, the school system will be able to track when the student rode a particular bus.

Gibbs noted that the installation of the GPS tracking has the potential to save the school system money. Unnecessary idling can be a costly issue in school transportation, and with the new system the central office will have the capability to track any unnecessary bus idling. Gibbs said in some cases while monitoring a pilot program, buses were idling upwards of 30 minutes. The tracking system will cut down on that.