On Sunday, Sept. 1, a boat shuttle left a dock at 9 a.m. at Cable Cove Boating Access Area off of NC 28 near Fontana Village with dozens of people on board armed with silk and real flowers. The occasion? North Shore Cemetery Association-hosted “decorations’ for back country cemeteries. 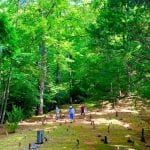 Since the late 1970s, hundreds of people who were cut off from their families’ grave sites, due to the construction of Fontana Dam and Lake in the 1940s, have been donning “sturdy footwear and clothing suitable for hiking and outdoor activities” and – after boating to land now surrounded by water – have traveled one-half to nine miles to participate in decoration events. These annual events, which began years ago by Helen Vance, 93,  and her sister, Mildred Johnson, 89, have drawn hundreds from at least a dozen states outside of North Carolina. When participants find the remote cemeteries, with such long-recognized area family names as Welch or McClure, among others, they make sure the graves are clean and maintained, place a flower at each site, help each other find and identify sites, and then “we have a song service with four to five songs, give people time to say something, do a short devotional and prayer, and then we have lunch together,” said Vance. “Afterwards, we give people more time to spend in the cemetery with their loved ones.”

According to Blue Ridge Mountain Life, Fontana Dam and Lake was conceptualized because increases in the production of aluminum were necessary during World War II. A dam was also needed to provide power for an Oak Ridge, Tenn.-based government nuclear research facility, which played a key role in the creation of nuclear bombs used at the end of World War II.

Construction of the lake began Jan. 1, 1942. Around 1,311 families, some of whom, like Vance, could trace their ancestry to the American Revolution, lost homes, land, and communities. The building of the dam required the purchase of 68,292 acres of land behind and around it. “Most of these people didn’t receive any relocation assistance because they refused to accept the buyout and move,” cited Blue Ridge Mountain Life. “In the end, many of them didn’t receive a dime for their property either.”

Plus, more than 1,000 graves were covered or became inaccessible and more than 60 miles of roads had to be relocated.

This was the beginning of what became the “Road to Nowhere” controversy, pointed out Vance. “Roads were flooded to make the dam and the lake, and a road was promised to be built back [so families could access cemeteries], but that never happened.”

Located in Great Smoky Mountains National Park, just outside of Bryson City, the “Road to Nowhere” continues from Bryson City for about 8 miles and then abruptly ends at a tunnel.

Vance’s great-great grandfather, Casper Goebel, a German Hessian soldier hired by the British to fight in the American Revolution, was captured by General George Washington’s army.

“Instead of being sent back to Germany, he decided to become a turncoat and join the Patriots fighting against the British,” said Vance. “Eventually his son, Samuel, settled in Western North Carolina. Later, the last name was changed from Goebel to Cable, so I come from the Cable family on my father’s side. There are five generations buried at the Cable cemetery across the mountain from Proctor.”

Fontana Dam and Lake construction forced Vance’s family to relocate in March 1944 from Proctor in Swain County to Sylva. “During my daddy’s funeral, we all realized that many of us had not been together since just before the dam was built.”

She added that until she and other individuals “fought for” the cemeteries to be taken care of and for transportation and access to those cemeteries, they were becoming lost – “reverting back to nature,” she said. “We just were not going to let that happen.”

Currently the National Park Service does extensive annual maintenance on the cemeteries and furnishes pontoon boat transportation across the lake as well as cleans up roadway access and provides jeep transportation to some of the more remote cemeteries.

“They take us as close to the cemeteries as possible, but we still have to walk and hike some,” she said.

Since the 1970s, Vance and other individuals have also assisted family members in acquiring some 350 headstones to place at cemeteries where there might have been just a rock marker.

Just this year, after 44 years of overseeing the North Shore Cemetery Association, Vance and Johnson handed the reins to Henry Chambers, whose family is from the now-under-water Chambers Creek area near Bryson City.

Not only do Fontana Dam and Lake-affected families gather for decorations, but they also have been getting together for an annual reunion. When Vance and her sister first began hosting the reunions in 1976, 400 to 500 people came from at least 15 states. That first annual reunion corresponded with the bicentennial and a surge in pride in heritage and community.

The North Shore Cemetery Association will be hosting the 44th annual reunion of families and friends associated with Fontana Lake’s North Shore on Sunday, Sept. 15, from 10 a.m. to 2 p.m. Vance said participants to the reunion should,  “come prepared for a great time of fellowship and good food.”  This event will be held rain or shine. Attendees are encouraged to bring a dish or two to share with those who “pot luck,” or bring own lunch and drinks. Plates and tableware are provided. Pets are allowed in accordance with Great Smoky Mountains National Park rules and regulations. Service animals must have papers and be vested.

From Bryson City, follow directional signs to Deep Creek National Park Access Area. Continue straight on the main road to the Picnic Pavilion, which will be on the left in about one-quarter of a mile. Facebook/northshorecemeteries provides additional information, changes, or cancellations.

The last decoration of the season will happen on Saturday, Sept. 28,  with the boat shuttle leaving at 10 a.m. from the Cable Cove Boating Access Area.

More information about the families who lived in the area – pre-Fontana Dam and Lake – is featured in Vance’s daughter, Leeunah Woods’ book, “Growing Up on Hazel Creek,” available through Facebook’s North Shore Cemetery Association site.