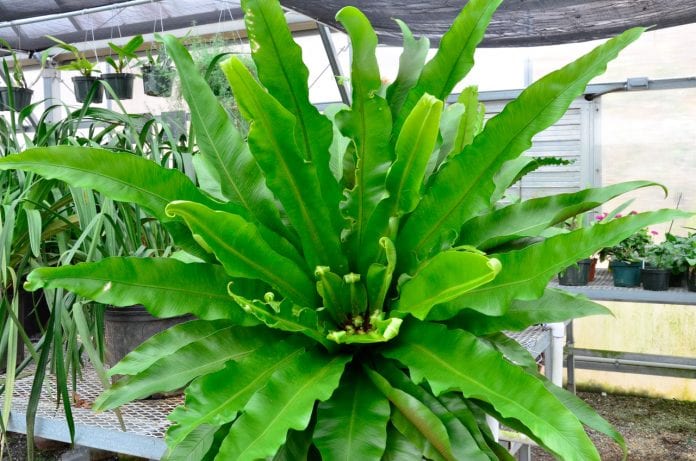 I am a sucker for tropical houseplants having had a mixed-use greenhouse for years.  For me going to a place like B. B. Barns is Asheville is like taking an alcoholic to the ABC store with a blank check.

My current favorites are Bird’s Nest Ferns called Aspleniums or Spleenworts.  This a large genus of ferns with more than 700 species world-wide.  We actually have several small native aspleniums growing here in Western North Carolina with names like as Hart’s Tongue, Ebony Spleenwort, Walking Fern and Maidenhair Spleenwort. Wort means plant and spleen refers to the spleen shapes of the spores producing receptables called sori underneath the leaves.

An ancient belief evolved claiming the shape of a plant that resembles a part of human anatomy may be useful for the treatment for that body part. It was believed that God created plants with these anatomical resemblances to show us what could be used for cures.  This is called the Doctrine of Signatures. For example, an extract from spleenwort ferns was used to treat spleen problems. The sori are spleen shaped. Wildflower plant examples are Liverwort or Hepatica to treat the liver, Lungwort or Plumbago for lung diseases, Toothwort for dental problems.  Common in our area is Ginseng that is used to assist virility problems.  A similar ailment could be treated with the Jack-in-the-pulpit.  There are many examples and you could even make up a few of your own for fun.  Sassafras for example has mitten shaped leaves so an extract from the leaves could treat hand circulation problems.

I really do not want to go in to detail about herbalist and naturopaths only to say that blind faith and total reliance upon the Doctrine of Signatures has resulted in some serious medical consequences.  On the other hand, the study of green medicines used by native peoples has revealed some substantial cures, Digitalis is a good example.  Good judgement is needed.

If you want to read about this sort of thing try to find a copy of anything written by Dr. Rosita Arvigo, DN.  She is an ethnobotanist, Doctor of Naturopathy and a spiritual healer.  She is well respected.  I do not know if she is still lecturing but if you ever have a chance to hear her do not miss the opportunity.  She studied with a renowned Mayan healer in Belize, Central America, for years and may still have a clinic there.

There are several large tropical spleenworts that have become popular as houseplants.  The most popular is Asplenium nidus.  Nidus means a nest o r breeding place.  Thus, its common name is Bird-Nest-Fern.  If you look into the center of most tropical Asplenium varieties the emerging fronds look like they are coming from a bird nest. They are easy to grow even indoors preferring temperatures of 70-80.  Being tropical they like humid environments. Resting the growing container on a shallow tray of water solves that problem.  They even like shade or indirect low light. They are vigorous growers reaching up to 2-3 feet.  Soil that will drain well is most important.  If the soil is kept too wet eventually the plant will rot.   In tropical forests it grows on tree trunks and cliffs in dark forests but it can be founding growing on the ground.  So, these ferns are epiphytic (attaches to other plants only for support) as well as terrestrial.   If it gets too much light the leaves will become pale instead of a vibrant green and borders of the leaves will become crinkled.

Commercially this plant is propagated from its spores.  That could be done at home but a little difficulty.  Ferns have both an asexual and a sexual life cycles.

Like most house plants scale insects and mealybugs can be a problem.  But usually plants from a good nursery are free of insects and diseases. The biggest problems occur from overwatering especially watering from the top (water will stand in the nest) and over fertilization.  A good rule of thumb is if a fertilizer is supposed to be mixed at 1 Tbl. per gallon use it at ½ Tbl. per gallon to be safe.

A big nursery will have several selections of tropical Aspleniums.  They are all similar with just slight variations in the fronds, some narrow, some wide, others having slightly wavy margins and some with forked leaf tips.   They will all grow easily making you look like a master of gardening.  Do not be confused by the brown reproductive sori underneath the leaf.  They could be mistaken for scale insects which never occur in distinct uniform patterns.

Note from Dr. Gilbert: Hello fellow gardeners. Since moving my bimonthly column to Macon County News, I have felt a lot more freedom to choose column subjects.  I am writing you to ask you to contribute to a future column regarding “pass along” plants, featuring plants that Franklin gardeners share.  My idea to ask several accomplished gardeners here in Franklin what is the one plant you have great success with that you share or pass along to neighbors or friends.  Submit a short descriptive paragraph to be published along with a small photograph.  If you are not comfortable with making the photo yourself, I can ask Karen Lawrence to do that for us.  There is not a publication date dead line. To start this ball rolling would you let me know if you are willing to participate along with two plants that you would recommend.  Email me at wyah@mindspring.com.